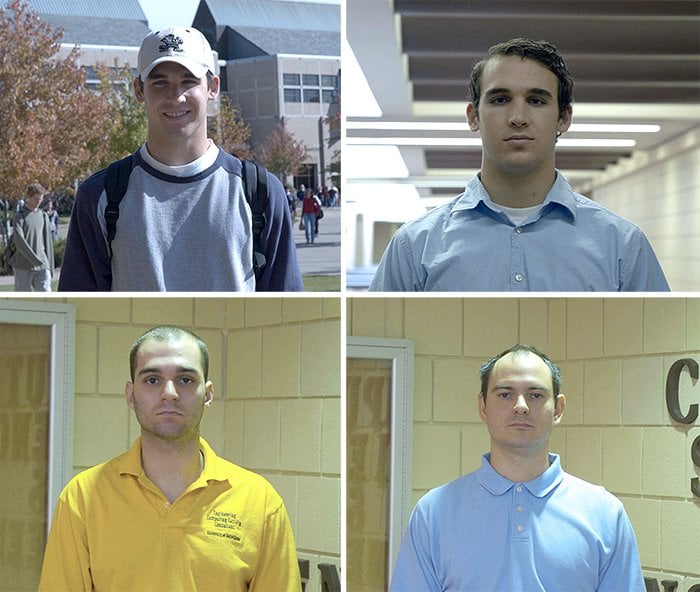 Above are pairs of photographs that face-recognition software failed to identify correctly. The top two photos are of the same person, while the bottom two photos are of different people. Credited to UT Dallas.
Home
Featured

Researchers find people use body cues to accurately identify people even when faces are obscured.

Subtle body cues allow people to identify others with surprising accuracy when faces are difficult to differentiate. This skill may help researchers improve person-recognition software and expand their understanding of how humans recognize each other.

A study published in Psychological Science by researchers at The University of Texas at Dallas demonstrates that humans rely on non-facial cues, such as body shape and build, to identify people in challenging viewing conditions, such as poor lighting.

“Psychologists and computer scientists have concentrated almost exclusively on the role of the face in person recognition,” explains lead researcher Allyson Rice. “Our results show that the body can also provide important and sometimes sufficient identity information for person recognition.”

During several experiments, researchers asked college-age participants to look at images of two people side-by-side and identify whether the images showed the same person. Some pairs looked similar despite showing different people, while other image pairs showed the same person with a different appearance. The researchers used computer face recognition systems to find pairs of pictures in which facial characteristics were difficult to use for identity.

Overall, participants accurately discerned whether the images showed the same person when they were provided complete images that showed both the face and body. Participants were just as accurate in identifying people in the image pairs when the faces were blocked out and only the bodies were shown. But, similarly to the computer-based face recognition system, participants had trouble identifying images of the subjects’ faces without their bodies.

“People’s recognition strategies were inaccessible to their conscious awareness,” Rice said. “This provides a cautionary tale in ascribing credibility to people’s subjective reports of how they came to an identity decision.”

Dr. Alice O’Toole, Aage and Margareta Møller Professor in the School of Behavioral and Brain Sciences, has worked on facial recognition for over 15 years and supervised the project.

“Given the widespread use of face recognition systems in security settings, it is important for these systems to make use of all potentially helpful information,” O’Toole said. “Our work shows that the body can be surprisingly useful for identification, especially when the face fails to provide the necessary identity information.”

Other authors of the study include Dr. Vaidehi Natu and Xiaobo An from UT Dallas and Dr. P. Jonathon Phillips from the National Institute of Standards and Technology.

This work was funded by the Technical Support Working Group of the Department of Defense. Phillips was supported in part by the Federal Bureau of Investigation.