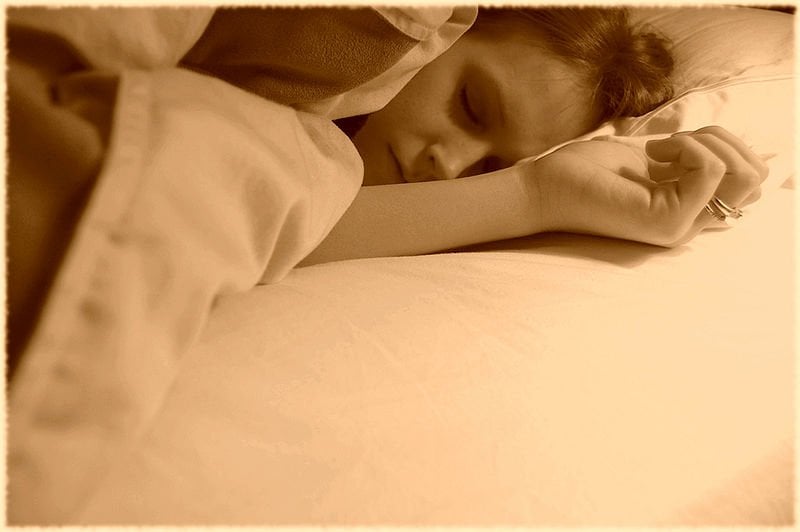 People with depression, bipolar disorder, alcoholism, panic or post-traumatic stress disorder and anxiety were more likely to experience sleep drunkenness. This image of a sleeping woman is for illustrative purposes only. Credit Pedro Simões.

Sleep Drunkenness Disorder May Affect 1 in 7

A study is shining new light on a sleep disorder called “sleep drunkenness.” The disorder may be as prevalent as affecting one in every seven people. The research is published in the August 26, 2014, print issue of Neurology, the medical journal of the American Academy of Neurology.

Sleep drunkenness disorder involves confusion or inappropriate behavior, such as answering the phone instead of turning off the alarm, during or following arousals from sleep, either during the first part of the night or in the morning. An episode, often triggered by a forced awakening, may even cause violent behavior during sleep or amnesia of the episode.

“These episodes of waking up confused have received considerably less attention than sleepwalking even though the consequences can be just as serious,” said study author Maurice M. Ohayon, MD, DSc, PhD, with Stanford University School of Medicine in Palo Alto, CA.

For the study, 19,136 people age 18 and older from the general US population were interviewed about their sleep habits and whether they had experienced any symptoms of the disorder. Participants were also asked about mental illness diagnoses and any medications they took.

The study found that 15 percent of the group had experienced an episode in the last year, with more than half reporting more than one episode per week. In the majority of cases—84 percent—people with sleep drunkenness also had a sleep disorder, a mental health disorder or were taking psychotropic drugs such as antidepressants. Less than 1 percent of the people with sleep drunkenness had no known cause or related condition.

Among those who had an episode, 37.4 percent also had a mental disorder. People with depression, bipolar disorder, alcoholism, panic or post-traumatic stress disorder and anxiety were more likely to experience sleep drunkenness.

The research also found that about 31 percent of people with sleep drunkenness were taking psychotropic medications such as antidepressants. Both long and short sleep times were associated with the sleep disorder. About 20 percent of those getting less than six hours of sleep per night and 15 percent of those getting at least nine hours experienced sleep drunkenness. People with sleep apnea also were more likely to have the disorder.

“These episodes of confused awakening have not gotten much attention, but given that they occur at a high rate in the general population, more research should be done on when they occur and whether they can be treated,” said Ohayon. “People with sleep disorders or mental health issues should also be aware that they may be at greater risk of these episodes.”

The study was supported by the Arrillaga Foundation.