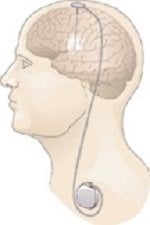 Electrical leads are implanted in the brain, one on each side, and an electrical pulse generator is placed near the collarbone. The device is programmed with a remote, hand-held controller.
Home
Featured

In what is believed to be the largest follow-up record of patients with the most common form of hereditary dystonia – a movement disorder that can cause crippling muscle contractions – experts in deep brain stimulation report good success rates and lasting benefits.

Michele Tagliati, MD, neurologist, director of the Movement Disorders Program at Cedars-Sinai Medical Center’s Department of Neurology, and Ron L. Alterman, MD, chief of the Division of Neurosurgery at Beth Israel Deaconess Medical Center in Boston, published the study in the July issue of the journal Neurosurgery. The doctors worked together at two New York City hospitals for a decade, until Tagliati joined Cedars-Sinai in 2010.

The study is focused on early-onset generalized dystonia, which in 1997 was found to be caused by a mutation of the DYT1 gene. Less than 1 percent of the overall population carries this mutation, but the frequency is believed to be three to five times higher among people of Ashkenazi Jewish heritage. Thirty percent of people who carry the defect develop dystonia.

“Long-term follow-up of DYT1 patients who have undergone DBS treatment is scarce, with current medical literature including only about 50 patients followed for three or more years,” Tagliati said. This study reviewed medical records of 47 consecutive patients treated with DBS for at least one year over a span of 10 years, 2001 to 2011.

“We found that, on average, symptom severity dropped to less than 20 percent of baseline within two years of device implantation. Sixty-one percent of patients were able to discontinue all their dystonia-related medications, and 91 percent were able to discontinue at least one class of drugs,” Tagliati said. “Although a few earlier studies found that stimulation’s effectiveness might wane after five years, our observations confirmed what other important DBS studies in dystonia are finding. Patients had statistically and clinically significant improvement that was maintained up to eight years.”

Alterman, the article’s senior author and the neurosurgeon who performed the implant surgeries, said the study also confirmed the procedure’s safety. Complications, such as infection and device malfunction, were rare and manageable.

Patient follow-up ranged from one year to eight years after surgery; 41 patients were seen for at least two years, and four completed eight years. The youngest patient at time of surgery was 8 and the oldest was 71, with a median age of 16.

Dystonia’s muscle contractions cause the affected area of the body to twist involuntarily, with symptoms that range from mild to crippling. If drugs – which often have undesirable side effects, especially at higher doses – fail to give relief, neurosurgeons and neurologists may work together to supplement medications with deep brain stimulation, aimed at modulating abnormal nerve signals. Electrical leads are implanted in the brain – one on each side – and an electrical pulse generator is placed near the collarbone. The device is programmed with a remote, hand-held controller. Tagliati is an expert in device programming, which fine-tunes stimulation for individual patients.

Feeling Foggy? Your Head Is in the Clouds for a Reason

Notes about this DBS and Dystonia research