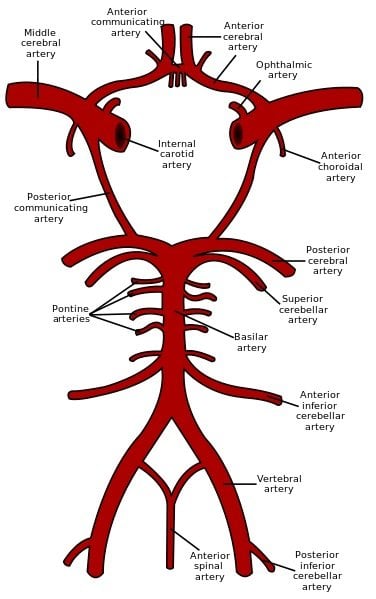 The network of arteries supplying blood flow to the brain is more likely to be incomplete in people who suffer migraine. Variations in arterial anatomy lead to asymmetries in cerebral blood flow that might contribute to the process triggering migraines. This image is a schematic representation of the circle of Willis, arteries of the brain and brain stem.
Home
Featured

Migraine is Associated with Variations in Structure of Brain Arteries

Incomplete circle of willis more common in subjects with migraine.

The network of arteries supplying blood flow to the brain is more likely to be incomplete in people who suffer migraine, a new study by researchers in the Perelman School of Medicine at the University of Pennsylvania reports. Variations in arterial anatomy lead to asymmetries in cerebral blood flow that might contribute to the process triggering migraines.

The arterial supply of blood to the brain is protected by a series of connections between the major arteries, termed the “circle of Willis” after the English physician who first described it in the 17th century. People with migraine, particularly migraine with aura, are more likely to be missing components of the circle of Willis.

Migraine affects an estimated 28 million Americans, causing significant disability. Experts once believed that migraine was caused by dilation of blood vessels in the head, while more recently it has been attributed to abnormal neuronal signals. In this study, appearing in PLOS ONE, researchers suggest that blood vessels play a different role than previously suspected: structural alterations of the blood supply to the brain may increase susceptibility to changes in cerebral blood flow, contributing to the abnormal neuronal activity that starts migraine.

“People with migraine actually have differences in the structure of their blood vessels – this is something you are born with,” said the study’s lead author, Brett Cucchiara, MD, Associate Professor of Neurology. “These differences seem to be associated with changes in blood flow in the brain, and it’s possible that these changes may trigger migraine, which may explain why some people, for instance, notice that dehydration triggers their headaches.”

In a study of 170 people from three groups – a control group with no headaches, those who had migraine with aura, and those who had migraine without aura – the team found that an incomplete circle of Willis was more common in people with migraine with aura (73 percent) and migraine without aura (67 percent), compared to a headache-free control group (51 percent). The team used magnetic resonance angiography to examine blood vessel structure and a noninvasive magnetic resonance imaging method pioneered at the University of Pennsylvania, called Arterial spin labeling (ASL), to measure changes in cerebral blood flow.

“Abnormalities in both the circle of Willis and blood flow were most prominent in the back of the brain, where the visual cortex is located. This may help explain why the most common migraine auras consist of visual symptoms such as seeing distortions, spots, or wavy lines,” said the study’s senior author, John Detre, MD, Professor of Neurology and Radiology.

Both migraine and incomplete circle of Willis are common, and the observed association is likely one of many factors that contribute to migraine in any individual. The researchers suggest that at some point diagnostic tests of circle of Willis integrity and function could help pinpoint this contributing factor in an individual patient. Treatment strategies might then be personalized and tested in specific subgroups.

Notes about this neurology and migraine research

The study was funded by National Institute of Neurological Disorders and Stroke (NINDS) (R01 NS061572).

Contact: Kim Menard – University of Pennsylvania School of Medicine
Source: University of Pennsylvania School of Medicine press release
Image Source: The schematic representation of the circle of Willis is credited to Rhcastilhos and is in the public domain.
Original Research: Full open access research for “Migraine with Aura Is Associated with an Incomplete Circle of Willis: Results of a Prospective Observational Study” by Brett Cucchiara, Ronald L. Wolf, Lidia Nagae, Quan Zhang, Scott Kasner, Ritobrato Datta, Geoffrey K. Aguirre and John A. Detre in PLOS ONE. Published online July 26 2013 doi:10.1371/journal.pone.0071007