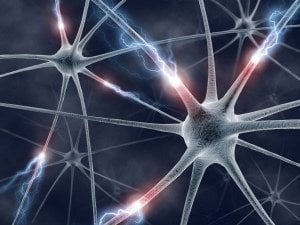 Neurons communicate through neurotransmitters like dopamine and acetylcholine. Such signalling networks are activated during learning processes. Credit given below.
Home
Featured

A major goal in neuroscience is to be able to use magnetic resonance images of brain activity to identify how a person learns. Researchers from ETH and the University of Zurich have taken an important step forward by showing that mistakes made during a learning process activate certain areas of the brain.

Just as a doctor is able to use a blood test to determine the health of a patient’s liver, neurologists are trying to develop non-invasive tests to examine the brain activity of their patients. Using imaging techniques such as functional magnetic resonance imaging (fMRI), medical practitioners are able to measure activity in certain areas of the brain based on the blood flow in these areas. Linking the brain activities made visible with fMRI technology to the respective neuronal processes – i.e. the activity of specific neuron networks – remains a difficult task.

Klaas Stephan, Professor of Translational Neuroscience Modelling at ETH and the University of Zurich, and his peers have undertaken the task of identifying these links. Stephan’s postgraduate student Sandra Iglesias has taken an important step forward in this field. Together with her colleagues, she was able to demonstrate how certain steps of the learning process – more specifically, mistakes made during associative learning – activate two distinct neuronal networks in the brain.

Dopamine not only associated with gratification

During a series of tests, high and low-pitched tones were played back to subjects, who then had to predict whether they would be shown a picture of a house or a face; for example, an image of a house was shown 70 per cent of the time after a high-pitched tone was played. Meanwhile, the researchers monitored the subjects’ brain activity on the fMRI. The key question in this experiment was to determine which areas of the brain were activated when an incorrect prediction was made.

Wrong predictions activated the midbrain, which contains mainly neurons that communicate using the neurotransmitter dopamine. These are referred to as dopaminergic neurons. “Until now, it has been assumed that dopaminergic neurons signal an unexpected reward experienced during the learning processes,” explains Iglesias. In their study, however, Iglesias and her colleagues were able to demonstrate for the first time how these neurons can also be activated independently of gratification processes. In other words, this activity was triggered solely by the unexpected appearance of the image of a house or face following an incorrect prediction. “This has nothing to do with gratification,” says Iglesias.

The researchers also succeeded in linking another aspect of the learning process with a specific brain activity. During the 24-minute learning tests, the researchers varied the probability with which the images were associated with the different sounds. At the same time, they observed how quickly and accurately the subjects adjusted their predictions to the actual probability. If the probability expected by the subjects differed widely from the actual probability, the fMRI showed increased activity in the basal forebrain, which contains mainly neurons that use the neurotransmitter acetylcholine to transmit signals.

Towards the discovery of a diagnostic tool

Based on their findings, however, researchers are still in the early stages. “We have yet to study any correlation with clinically significant processes,” says Stephan. The method must be developed further to identify diagnostically relevant processes in patients. “If we can use this kind of method, for example, to show that one sub-type of schizophrenia instead of another is related to a disorder in the dopaminergic signal systems of the brain, it will have a bearing on which medication should be administered.”

In a subsequent phase, Iglesias will examine whether activity in these brain areas changes in learning tests if subjects first take a drug that affects this type of brain activity. The goal will be to use fMRI images to determine whether the patient has taken the drug or a placebo. “This will bring us one step closer to the clinically relevant processes,” says Stephan.

Notes about this neuroimaging and learning research