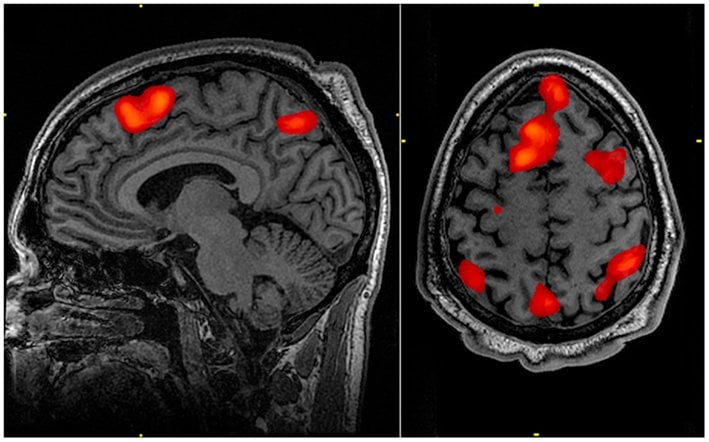 Researchers discover children have a limit to what they can see and remember at a given time, known as visual working memory. In tests, the researchers found that 3-year-olds can hold a maximum of 1.3 objects in visual working memory, while 4-year-olds reach capacity at 1.8 objects. Adults hit the ceiling at 3 to 4 objects. This illustrative fMRI scan was taken during working memory tasks. Working memory tasks typically show activation in the bilateral and superior frontal cortex as well as in parts of the superior bilateral parietal cortex. Credited to John Graner, Walter Reed National Military Medical Center. This image is in the public domain.
Home
Featured

A Look Inside Children’s Minds

University of Iowa study shows how 3- and 4-year-olds retain what they see around them.

When young children gaze intently at something or furrow their brows in concentration, you know their minds are busily at work. But you’re never entirely sure what they’re thinking.

Now you can get an inside look. Psychologists led by the University of Iowa for the first time have peered inside the brain with optical neuroimaging to quantify how much 3- and 4-year-old children are grasping when they survey what’s around them and to learn what areas of the brain are in play. The study looks at “visual working memory,” a core cognitive function in which we stitch together what we see at any given point in time to help focus attention. In a series of object-matching tests, the researchers found that 3-year-olds can hold a maximum of 1.3 objects in visual working memory, while 4-year-olds reach capacity at 1.8 objects. By comparison, adults max out at 3 to 4 objects, according to prior studies.

“This is literally the first look into a 3 and 4-year-old’s brain in action in this particular working memory task,” says John Spencer, psychology professor at the UI and corresponding author of the paper, which appears in the journal NeuroImage.

The research is important, because visual working memory performance has been linked to a variety of childhood disorders, including attention-deficit/hyperactivity disorder (ADHD), autism, developmental coordination disorder as well as affecting children born prematurely. The goal is to use the new brain imaging technique to detect these disorders before they manifest themselves in children’s behavior later on.

“At a young age, children may behave the same,” notes Spencer, who’s also affiliated with the Delta Center and whose department is part of the College of Liberal Arts and Sciences, “but if you can distinguish these problems in the brain, then it’s possible to intervene early and get children on a more standard trajectory.”

Plenty of research has gone into better understanding visual working memory in children and adults. Those prior studies divined neural networks in action using function magnetic resonance imaging (fMRI). That worked great for adults, but not so much with children,­ especially young ones, whose jerky movements threw the machine’s readings off kilter. So, Spencer and his team turned to functional near-infrared spectroscopy (fNIRS), which has been around since the 1960s but has never been used to look at working memory in children as young as three years of age.

“It’s not a scary environment,” says Spencer of the fNIRS. “No tube, no loud noises. You just have to wear a cap.”

Like fMRI, fNIRS records neural activity by measuring the difference in oxygenated blood concentrations anywhere in the brain. You’ve likely seen similar technology when a nurse puts your finger in a clip to check your circulation. In the brain, when a region is activated, neurons fire like mad, gobbling up oxygen provided in the blood. Those neurons need another shipment of oxygen-rich blood to arrive to keep going. The fNIRS measures the contrast between oxygen-rich and oxygen-deprived blood to gauge which area of the brain is going full tilt at a point in time.

The researchers outfitted the youngsters with colorful, comfortable ski hats in which fiber optic wires had been woven. The children played a computer game in which they were shown a card with one to three objects of different shapes for two seconds. After a pause of a second, the children were shown a card with either the same or different shapes. They responded whether they had seen a match.

The tests revealed novel insights. First, neural activity in the right frontal cortex was an important barometer of higher visual working memory capacity in both age groups. This could help clinicians evaluate children’s visual working memory at a younger age than before, and work with those whose capacity falls below the norm, the researchers say.

Secondly, 4-year olds showed a greater use than 3-year olds of the parietal cortex, located in both hemispheres below the crown of the head and which is believed to guide spatial attention.

“This suggests that improvements in performance are accompanied by increases in the neural response,” adds Aaron Buss, a UI graduate student in psychology and the first author on the paper. “Further work will be needed to explain exactly how the neural response increases—either through changes in local tuning, or through changes in long range connectivity, or some combination.”

The National Institutes of Health (grant number: P41 14075) funded the research through a grant to Boas. Other funding came from the UI’s funding of the Delta Center’s Child Imaging Laboratory in Development Science (CHILDS) facility. This is the first study from data collected from the CHILDS facility.