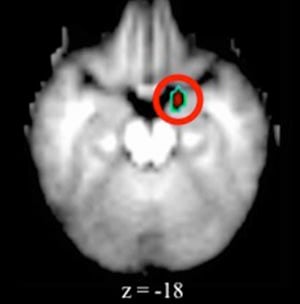 Brain scans of preschoolers with depression revealed elevated activity in the amygdala (the small area in the red circle) when compared with scans of young children exhibiting no signs of depression. Credited to Washington University at St. Louis.
Home
Featured

A key brain structure that regulates emotions works differently in preschoolers with depression compared with their healthy peers, according to new research at Washington University School of Medicine in St. Louis.

The differences, measured using functional magnetic resonance imaging (fMRI), provide the earliest evidence yet of changes in brain function in young children with depression. The researchers say the findings could lead to ways to identify and treat depressed children earlier in the course of the illness, potentially preventing problems later in life.

“The findings really hammer home that these kids are suffering from a very real disorder that requires treatment,” said lead author Michael S. Gaffrey, PhD. “We believe this study demonstrates that there are differences in the brains of these very young children and that they may mark the beginnings of a lifelong problem.”

The study is published in the July issue of the Journal of the American Academy of Child & Adolescent Psychiatry.

Depressed preschoolers had elevated activity in the brain’s amygdala, an almond-shaped set of neurons important in processing emotions. Earlier imaging studies identified similar changes in the amygdala region in adults, adolescents and older children with depression, but none had looked at preschoolers with depression.

For the new study, scientists from Washington University’s Early Emotional Development Program studied 54 children ages 4 to 6. Before the study began, 23 of those kids had been diagnosed with depression. The other 31 had not. None of the children in the study had taken antidepressant medication.

Although studies using fMRI to measure brain activity by monitoring blood flow have been used for years, this is the first time that such scans have been attempted in children this young with depression. Movements as small as a few millimeters can ruin fMRI data, so Gaffrey and his colleagues had the children participate in mock scans first. After practicing, the children in this study moved less than a millimeter on average during their actual scans.

While they were in the fMRI scanner during the study, the children looked at pictures of people whose facial expressions conveyed particular emotions. There were faces with happy, sad, fearful and neutral expressions.

“The amygdala region showed elevated activity when the depressed children viewed pictures of people’s faces,” said Gaffrey, an assistant professor of psychiatry. “We saw the same elevated activity, regardless of the type of faces the children were shown. So it wasn’t that they reacted only to sad faces or to happy faces, but every face they saw aroused activity in the amygdala.”

Looking at pictures of faces often is used in studies of adults and older children with depression to measure activity in the amygdala. But the observations in the depressed preschoolers were somewhat different than those previously seen in adults, where typically the amygdala responds more to negative expressions of emotion, such as sad or fearful faces, than to faces expressing happiness or no emotion.

In the preschoolers with depression, all facial expressions were associated with greater amygdala activity when compared with their healthy peers.

Gaffrey said it’s possible depression affects the amygdala mainly by exaggerating what, in other children, is a normal amygdala response to both positive and negative facial expressions of emotion. But more research will be needed to prove that. He does believe, however, that the amygdala’s reaction to people’s faces can be seen in a larger context.

“Not only did we find elevated amygdala activity during face viewing in children with depression, but that greater activity in the amygdala also was associated with parents reporting more sadness and emotion regulation difficulties in their children,” Gaffrey said. “Taken together, that suggests we may be seeing an exaggeration of a normal developmental response in the brain and that, hopefully, with proper prevention or treatment, we may be able to get these kids back on track.”

Notes about this neuroimaging and neuropsycholohy research