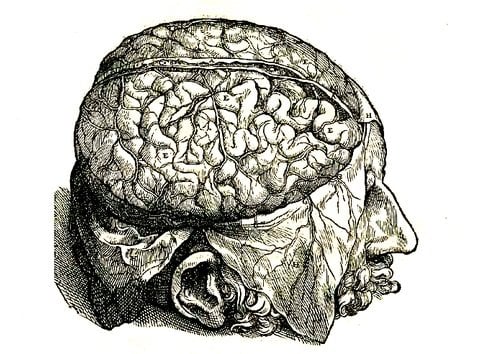 Researchers identified 12 genetic regions associated with migraine sysceptibility. Eight of these were discovered in or near genes which play a role in controlling brain circuitries, and two of the regions were associted with genes responsible for maintaining healthy brain tissue. This illustrative image is adpated from Andreas Vesalius' "De humani corporis fabrica libri septem", 1543, and shows a human head with the top half of the cranium removed and the dura mater (brain covering) peeled back over the sides of the head, exposing the brain.
Home
Featured

Getting to Grips with Migraine

In the largest study of migraines, researchers have found 5 genetic regions that for the first time have been linked to the onset of migraine. This study opens new doors to understanding the cause and biological triggers that underlie migraine attacks.

The team identified 12 genetic regions associated with migraine susceptibility. Eight of these regions were found in or near genes known to play a role in controlling brain circuitries and two of the regions were associated with genes that are responsible for maintaining healthy brain tissue. The regulation of these pathways may be important to the genetic susceptibility of migraines.

Migraine is a debilitating disorder that affects approximately 14% of adults. Migraine has recently been recognised as the seventh disabler in the Global Burden of Disease Survey 2010 and has been estimated to be the most costly neurological disorder. It is an extremely difficult disorder to study because no biomarkers between or during attacks have been identified so far.

“This study has greatly advanced our biological insight about the cause of migraine,” says Dr Aarno Palotie, from the Wellcome Trust Sanger Institute. “Migraine and epilepsy are particularly difficult neural conditions to study; between episodes the patient is basically healthy so it’s extremely difficult to uncover biochemical clues.

“We have proven that this is the most effective approach to study this type of neurological disorder and understand the biology that lies at the heart of it.”

The team uncovered the underlying susceptibilities by comparing the results from 29 different genomic studies, including over 100,000 samples from both migraine patients and control samples.

They found that some of the regions of susceptibility lay close to a network of genes that are sensitive to oxidative stress, a biochemical process that results in the dysfunction of cells.

The team expects many of the genes at genetic regions associated with migraine are interconnected and could potentially be disrupting the internal regulation of tissue and cells in the brain, resulting in some of the symptoms of migraine.

“We would not have made discoveries by studying smaller groups of individuals,” says Dr Gisela Terwindt, co-author from Leiden University Medical Centre. “This large scale method of studying over 100,000 samples of healthy and affected people means we can tease out the genes that are important suspects and follow them up in the lab.”

The team identified an additional 134 genetic regions that are possibly associated to migraine susceptibility with weaker statistical evidence. Whether these regions underlie migraine susceptibility or not still needs to be elucidated. Other similar studies show that these statistically weaker culprits can play an equal part in the underlying biology of a disease or disorder.

“The molecular mechanisms of migraine are poorly understood. The sequence variants uncovered through this meta-analysis could become a foothold for further studies to better understanding the pathophysiology of migraine” says Dr Kári Stefánsson, President of deCODE genetics.

“This approach is the most efficient way of revealing the underlying biology of these neural disorders,” says Dr Mark Daly, from the Massachusetts General Hospital and the Broad Institute of MIT and Harvard. “Effective studies that give us biological or biochemical results and insights are essential if we are to fully get to grips with this debilitating condition.

“Pursuing these studies in even larger samples and with denser maps of biological markers will increase our power to determine the roots and triggers of this disabling disorder.”

Notes about this neurogenetics and migraine research

Funding: A full list of funding can be found in the study.