UCL scientists have shown that there are widespread differences in how genes, the basic building blocks of the human body, are expressed in men and women’s brains.

Based on post-mortem adult human brain and spinal cord samples from over 100 individuals, scientists at the UCL Institute of Neurology were able to study the expression of every gene in 12 brain regions. The results are published today in Nature Communications. 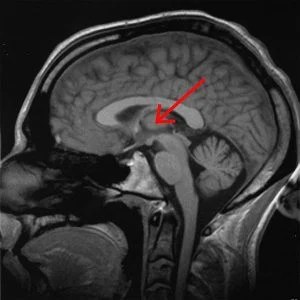 Researchers specifically looked at the NRXN3 gene, which has previously been implicated in autism. The gene is transcribed into two major forms and the study results show that although one form is expressed similarly in both men and women, the other is produced at lower levels in women in the thalamus. This MRI scan shows the location of the thalamus in a human brain. Credit provided below.

Among the many results, the researchers specifically looked at the gene NRXN3, which has been implicated in autism. The gene is transcribed into two major forms and the study results show that although one form is expressed similarly in both men and women, the other is produced at lower levels in women in the area of the brain called the thalamus. This observation could be important in understanding the higher incidence of autism in males.

Overall, the study suggests that there is a sex-bias in the way that genes are expressed and regulated, leading to different functionality and differences in susceptibility to brain diseases observed by neurologists and psychiatrists.

Dr. Mina Ryten, UCL Institute of Neurology and senior author of the paper, said: “There is strong evidence to show that men and women differ in terms of their susceptibility to neurological diseases, but up until now the basis of that difference has been unclear.

“Our study provides the most complete information so far on how the sexes differ in terms of how their genes are expressed in the brain. We have released our data so that others can assess how any gene they are interested in is expressed differently between men and women.”