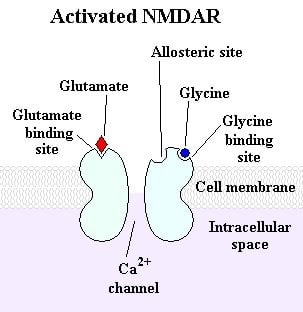 Patients with schizophrenia have poorly functioning or “hypoactive” NMDA receptors, suggesting the possibility of treatment with drugs that positively affect these receptors. This illustration shows an activated NMDA receptor.
Home
Featured

Researchers at Boston University School of Medicine (BUSM) have uncovered important clues about a biochemical pathway in the brain that may one day expand treatment options for schizophrenia. The study, published online in the journal Molecular Pharmacology, was led by faculty within the department of pharmacology and experimental therapeutics at BUSM.

Patients with schizophrenia suffer from a life-long condition that can produce delusions, disordered thinking, and breaks with reality. A number of treatments are available for schizophrenia, but many patients do not respond to these therapies or experience side effects that limit their use.

This research focused on key components of the brain known as NMDA receptors. These receptors are located on nerve cells in the brain and serve as biochemical gates that allow calcium ions (electrical charges) to enter the cell when a neurotransmitter, such as glutamate, binds to the receptor. Proper activation of these receptors is critical for sensory perception, memory and learning, including the transfer of short-term memory into long-term storage. Patients with schizophrenia have poorly functioning or “hypoactive” NMDA receptors, suggesting the possibility of treatment with drugs that positively affect these receptors. Currently the only way to enhance NMDA receptor function is through the use of agents called agonists that directly bind to the receptor on the outer surface of the cell, opening the gates to calcium ions outside the cell.

In this study, the researchers discovered a novel “non-canonical” pathway in which NMDA receptors residing inside the cell are stimulated by a neuroactive steroid to migrate to the cell surface (a process known as trafficking), thus increasing the number of receptors available for glutamate activation. The researchers treated neural cells from the cerebral cortex with the novel steroid pregnenolone sulfate (PregS) and found that the number of working NMDA receptors on the cell surface increased by 60 to 100 percent within 10 minutes. The exact mechanism by which this occurs is not completely clear, but it appears that PregS increases calcium ions within the cell, which in turn produces a green light signal for more frequent trafficking of NMDA receptors to the cell surface.

Although still in the early stages, further research in this area may be instrumental in the development of treatments not only for schizophrenia, but also for other conditions associated with malfunctioning NMDA receptors, such as age-related decreases in memory and learning ability.

Notes about this schizophrenia and neurochemistry research