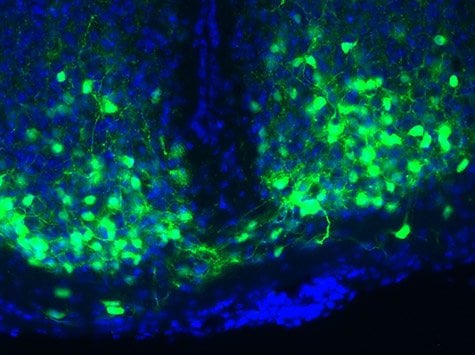 In this image of the master clock in the mouse brain, the nuclei of the clock cells are blue, and VIP — a molecule that allows the neurons in the clock to synchronize — is fluorescent green. New work shows that, at high doses, VIP desynchronizes the cells, allowing them to adjust rapidly to changes in the daily schedule. This may help relieve the malaise felt by many shift workers and by travelers who cross time zones. Credited to Cristina Mazuski/WUSTL.
Home
Featured

A brain chemical that desynchronizes the cells in the biological clock helps the clock adjust more quickly to abrupt shifts in daily light/dark schedules such as those that plague modern life.

A small molecule called VIP, known to synchronize time-keeping neurons in the brain’s biological clock, has the startling effect of desynchronizing them at higher dosages, said a research team at Washington University in St. Louis.

Far from being catastrophic, the temporary loss of synchronization actually might be useful.

Neurons knocked for a loop by a burst of VIP are better able to re-synchronize to abrupt shifts in the light-dark cycle such as those that make jet lag or shift work so miserable. It takes tumbling cells only half as long as undisturbed cells to entrain to the new schedule, the scientists say in the Oct. 28 online early edition of the Proceedings of the National Academy of Sciences.

Resynching by jarring is familiar to everyone who has whacked a flickering analog TV to get it to sync or hit the ceiling near a fluorescent light in the hope that its ballast starts buzzing.

The scientists hope to find a way to coax the brain into releasing its own stores of VIP or to find other ways to deliberately cause tumbling so the body’s clock will reset to a new time. Such a treatment might help travelers, shift works and others who overtax the biological clock’s ability to entrain to environmental cues.

The finding is the latest to emerge from the lab of Erik Herzog, PhD, who has studied the body’s time-keeping mechanisms for 13 years at Washington University in St. Louis. His focus is on understanding the clock, but because most of us live against our biological clocks and research shows this leads to health problems ranging from obesity to depression, his work is likely to have practical payoffs.

The master circadian clock in mammals is a knot of 20,000 nerve cells roughly the size of a quarter of a grain of rice called the suprachiasmatic nucleus (SCN). Each neuron in the SCN keeps time, but because they’re different cells, they have slightly different rhythms. Some run a bit fast and others a bit slow.

“They’re like a society where each cell has its own opinion on what time of day it is,” said Herzog, a profesor of biology in Arts & Sciences. “They need to agree on the time of day in order to coordinate daily rhythms in alertness and metabolism.”

The cells talk to one another through a molecule called VIP (vasoactive intestinal polypeptide), a small string of amino acids that they release and receive. It’s through VIP that cells tell one another what time they think it is, Herzog said. If you get rid of VIP or the receptor for VIP, the cells lose synchrony.

“We were trying to understand exactly when VIP is released and how it synchronized the cells,” Herzog said, “and Sungwon An, then a graduate student in my lab, discovered that when there was extra VIP around, the cells lost synchrony.

“That was really surprising for us,” he said. “We did a lot of experiments just to make sure the VIP we had bought wasn’t contaminated in some way.”

It turned out the effect was real. Above a critical level, the more VIP was released, the more desynchronized the cells became. “It’s almost as if at higher doses the cells become blind to the information from their neighbors,” Herzog said.

“Then we thought: ‘Well, if the cell rhythms are messed up and out of phase, the system may be more sensitive to environmental cues than it would be if all the cells were in sync.’” If it was more sensitive, it might be better able to adjust to the abrupt schedule shifts that characterize modern life.

They were encouraged in this line of thinking by a simulation of the SCN created by Linda Petzold, Kirsten Meeker, Rich Harang and Frank Doyle, all chemical engineers at the University of California, Santa Barbara. The numerical model predicted that increasing VIP would lead to phase tumbling (less synchrony) and accelerated entrainment.

Rapid entrainment to environmental cues is important, Herzog explained. The master clock has evolved to adjust to slow seasonal changes in light/dark schedules, but not to abrupt ones that are built into the fabric of modern life. Even the seemingly benign one-hour shift for daylight savings time increases the risk of fatal car crashes and of heart attacks.

“We were curious to see whether adding extra VIP would improve the ability of biological clocks to make big adjustments,” Herzog said. An, together with graduate student Cristina Mazuski and research scientist Daniel Granados-Fuentes, showed that a shot of VIP did in fact accelerate entrainment to a new light schedule.

“We found that in mice we could cut ‘jet lag’ in half by giving them a shot of VIP the day before we ‘flew them to a new time zone,’ by shifting their light schedule,” Herzog said.

“That’s really exciting, “ Herzog said. “This is the first demonstration that giving a bit more of a substance the brain already makes actually improves the way the circadian system functions. “

“We’re taking the system the brain uses to entrain to changes in the seasons and goosing it a bit so that it can adjust to bigger shifts in the light schedule,” he said.

“We’re hoping we’ll be able to find a way to coax the brain into releasing its own stores of VIP or a light trigger or other signal that mimics the effects of VIP,” Herzog said.