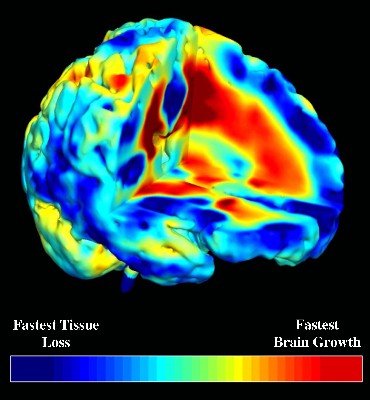 Schizophrenia is a spectrum disorder with multiple causes, most of which are unknown, that tends to run in families, and high neuregulin-1 levels have been found in only a minority of patients. The image is an MRI brain scan for child onset schizophrenia showing areas of brain growth and loss of tissue.
Home
Featured

Overexpression of a gene associated with schizophrenia causes classic symptoms of the disorder that are reversed when gene expression returns to normal, scientists report.

They genetically engineered mice so they could turn up levels of neuregulin-1 to mimic high levels found in some patients then return levels to normal, said Dr. Lin Mei, Director of the Institute of Molecular Medicine and Genetics at the Medical College of Georgia at Georgia Regents University.

They found that when elevated, mice were hyperactive, couldn’t remember what they had just learned and couldn’t ignore distracting background or white noise. When they returned neuregulin-1 levels to normal in adult mice, the schizophrenia-like symptoms went away, said Mei, corresponding author of the study in the journal Neuron.

While schizophrenia is generally considered a developmental disease that surfaces in early adulthood, Mei and his colleagues found that even when they kept neuregulin-1 levels normal until adulthood, mice still exhibited schizophrenia-like symptoms once higher levels were expressed. Without intervention, they developed symptoms at about the same age humans do.

“This shows that high levels of neuregulin-1 are a cause of schizophrenia, at least in mice, because when you turn them down, the behavior deficit disappears,” Mei said. “Our data certainly suggests that we can treat this cause by bringing down excessive levels of neuregulin-1 or blocking its pathologic effects.”

Schizophrenia is a spectrum disorder with multiple causes – most of which are unknown – that tends to run in families, and high neuregulin-1 levels have been found in only a minority of patients. To reduce neuregulin-1 levels in those individuals likely would require development of small molecules that could, for example, block the gene’s signaling pathways, Mei said. Current therapies treat symptoms and generally focus on reducing the activity of two neurotransmitters since the bottom line is excessive communication between neurons.

The good news is it’s relatively easy to measure neuregulin-1 since blood levels appear to correlate well with brain levels. To genetically alter the mice, they put a copy of the neuregulin-1 gene into mouse DNA then, to make sure they could control the levels, they put in front of the DNA a binding protein for doxycycline, a stable analogue for the antibiotic tetracycline, which is infamous for staining the teeth of fetuses and babies.

The mice are born expressing high levels of neuregulin-1 and giving the antibiotic restores normal levels. “If you don’t feed the mice tetracycline, the neuregulin-1 levels are always high,” said Mei, noting that endogenous levels of the gene are not affected. High-levels of neuregulin-1 appear to activate the kinase LIMK1, impairing release of the neurotransmitter glutamate and normal behavior. The LIMK1 connection identifies another target for intervention, Mei said.

Neuregulin-1 is essential for heart development as well as formation of myelin, the insulation around nerves. It’s among about 100 schizophrenia-associated genes identified through genome-wide association studies and has remained a consistent susceptibility gene using numerous other methods for examining the genetics of the disease. It’s also implicated in cancer.

Mei and his colleagues were the first to show neuregulin-1’s positive impact in the developed brain, reporting in Neuron in 2007 that it and its receptor ErbB4 help maintain a healthy balance of excitement and inhibition by releasing GABA, a major inhibitory neurotransmitter, at the sight of inhibitory synapses, the communication paths between neurons. Years before, they showed the genes were also at excitatory synapses, where they also could quash activation. In 2009, the MCG researchers provided additional evidence of the role of neuregulin-1 in schizophrenia by selectively deleting the gene for its receptor, ErbB4 and creating another symptomatic mouse.

Schizophrenia affects about 1 percent of the population, causing hallucinations, depression and impaired thinking and social behavior. Babies born to mothers who develop a severe infection, such as influenza or pneumonia, during pregnancy have a significantly increased risk of schizophrenia.

Notes about this Schizophrenia and neurogenetics research

The research was funded by the National Institutes of Health and the National Alliance for Research on Schizophrenia and Depression.