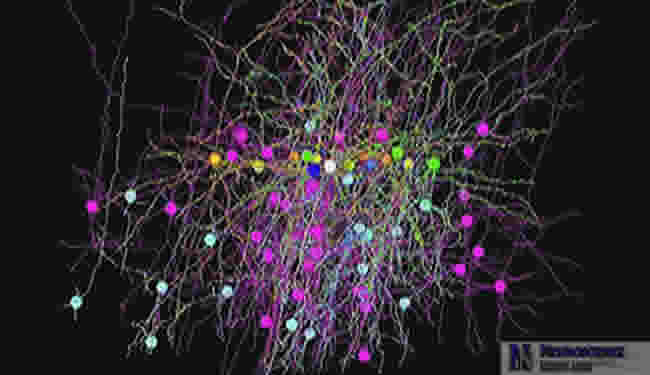 Focusing on a visual processing cortical area of mice brains, research teams recorded more than 3 million high-resolution images and produced 3-d images. Using these 3-d images, researchers then traced numerous connections from 10 of the neurons. These steps were used to create a partial wiring diagram of the 10 neurons.

The release claims this wiring diagram is already revealing new information regarding neural inhibition wiring in the mouse brain. The team “found that neurons tasked with suppressing brain activity seem to be randomly wired, putting the lid on local groups of neurons all at once rather than picking and choosing.”

Improvements in neural network models such as this one can greatly improve efforts to build more reliable artificial neural networks and improve research involving epilepsy, visual processing, neurological disorders and numerous subfields of neuroscience and psychology.

The press release below provides further details about this promising new research.

The brain is a black box. A complex circuitry of neurons fires information through channels, much like the inner workings of a computer chip. But while computer processors are regimented with the deft economy of an assembly line, neural circuits are impenetrable masses. Think tumbleweed.

Researchers in Harvard Medical School’s Department of Neurobiology have developed a technique for unraveling these masses. Through a combination of microscopy platforms, researchers can crawl through the individual connections composing a neural network, much as Google crawls Web links.

“The questions that such a technique enables us to address are too numerous even to list,” said Clay Reid, HMS professor of neurobiology and senior author on a paper reporting the findings in the March 10 edition of Nature.

The cerebral cortex is arguably the most important part of the mammalian brain. It processes sensory input, reasoning and, some say, even free will. For the past century, researchers have understood the broad outline of cerebral cortex anatomy. In the past decade, imaging technologies have allowed us to see neurons at work within a cortical circuit, to watch the brain process information.

But while these platforms can show us what a circuit does, they don’t show us how it operates.

For many years, Reid’s lab has been studying the cerebral cortex, adapting ways to hone the detail with which we can view the brain at work. Recently they and others have succeeded in isolating the activities of individual neurons, watching them fire in response to external stimuli.

The ultimate prize, however, would be to get inside a single cortical circuit and probe the architecture of its wiring.

Just one of these circuits, however, contains between 10,000 and 100,000 neurons, each of which makes about 10,000 interconnections, totaling upwards of 1 billion connections—all within a single circuit. “This is a radically hard problem to address,” Reid said.

Reid’s team, which included Davi Bock, then a graduate student, and postdoctoral researcher Wei-Chung Allen Lee, embarked on a two-part study of the pinpoint-sized region of a mouse brain that is involved in processing vision. They first injected the brain with dyes that flashed whenever specific neurons fired and recorded the firings using a laser-scanning microscope. They then conducted a large anatomy experiment, using electron microscopy to see the same neurons and hundreds of others with nanometer resolution.

Using a new imaging system they developed, the team recorded more than 3 million high-resolution images. They sent them to the Pittsburgh Supercomputing Center at Carnegie Mellon University, where researchers stitched them into 3-D images. Using the resulting images, Bock, Lee and laboratory technician Hyon Suk Kim selected 10 individual neurons and painstakingly traced many of their connections, crawling through the brain’s dense thicket to create a partial wiring diagram.

This model also yielded some interesting insights into how the brain functions. Reid’s group found that neurons tasked with suppressing brain activity seem to be randomly wired, putting the lid on local groups of neurons all at once rather than picking and choosing. Such findings are important because many neurological conditions, such as epilepsy, are the result of neural inhibition gone awry.

“This is just the iceberg’s tip,” said Reid. “Within ten years I’m convinced we’ll be imaging the activity of thousands of neurons in a living brain. In a visual circuit, we’ll interpret the data to reconstruct what an animal actually sees. By that time, with the anatomical imaging, we’ll also know how it’s all wired together.”

For now, Reid and his colleagues are working to scale up this platform to generate larger data sets.

One in 10 Older Americans Has Dementia

“How the brain works is one of the greatest mysteries in nature,” Reid added, “and this research presents a new and powerful way for us to explore that mystery.”

Notes about this neurobiology press release

This research was funded by the Center for Brain Science at Harvard University, Microsoft Research, and the NIH though the National Eye Institute. Researchers report no conflicts of interest.