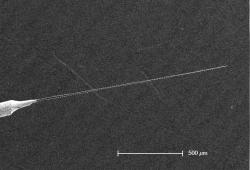 This image, taken with a scanning electron microscope, shows a new brain electrode that tapers to a point as thick as a single carbon nanotube. Credit: Inho Yoon and Bruce Donald, Duke.
Home
Featured

Neuroscientists may soon be modern-day harpooners, snaring individual brain-cell signals instead of whales with tiny spears made of carbon nanotubes.

The new brain cell spear is a millimeter long, only a few nanometers wide and harnesses the superior electromechanical properties of carbon nanotubes to capture electrical signals from individual neurons.

“To our knowledge, this is the first time scientists have used carbon nanotubes to record signals from individual neurons, what we call intracellular recordings, in brain slices or intact brains of vertebrates,” said Bruce Donald, a professor of computer science and biochemistry at Duke University who helped developed the probe.

He and his collaborators describe the carbon nanotube probes June 19 in PLOS ONE.

“The results are a good proof of principle that carbon nanotubes could be used for studying signals from individual nerve cells,” said Duke neurobiologist Richard Mooney, a study co-author. “If the technology continues to develop, it could be quite helpful for studying the brain.”

Scientists want to study signals from individual neurons and their interactions with other brain cells to better understand the computational complexity of the brain.

Currently, they use two main types of electrodes, metal and glass, to record signals from brain cells. Metal electrodes record spikes from a population of brain cells and work well in live animals. Glass electrodes also measure spikes, as well as the computations individual cells perform, but are delicate and break easily.

“The new carbon nanotubes combine the best features of both metal and glass electrodes. They record well both inside and outside brain cells, and they are quite flexible. Because they won’t shatter, scientists could use them to record signals from individual brain cells of live animals,” said Duke neurobiologist Michael Platt, who was not involved in the study.

In the past, other scientists have experimented with carbon nanotube probes. But the electrodes were thick, causing tissue damage, or they were short, limiting how far they could penetrate into brain tissue. They could not probe inside individual neurons.

To change this, Donald began working on a harpoon-like carbon-nanotube probe with Duke neurobiologist Richard Mooney five years ago. The two met during their first year at Yale in the 1976, kept in touch throughout graduate school and began meeting to talk about their research after they both came to Duke.

Mooney told Donald about his work recording brain signals from live zebra finches and mice. The work was challenging, he said, because the probes and machinery to do the studies were large and bulky on the small head of a mouse or bird.

With Donald’s expertise in nanotechnology and robotics and Mooney’s in neurobiology, the two thought they could work together to shrink the machinery and improve the probes with nano-materials.

To make the probe, graduate student Inho Yoon and Duke physicist Gleb Finkelstein used the tip of an electrochemically sharpened tungsten wire as the base and extended it with self-entangled multi-wall carbon nanotubes to create a millimeter-long rod. The scientists then sharpened the nanotubes into a tiny harpoon using a focused ion beam at North Carolina State University.

Yoon then took the nano-harpoon to Mooney’s lab and jabbed it into slices of mouse brain tissue and then into the brains of anesthetized mice. The results show that the probe transmits brain signals as well as, and sometimes better than, conventional glass electrodes and is less likely to break off in the tissue. The new probe also penetrates individual neurons, recording the signals of a single cell rather than the nearest population of them.

Based on the results, the team has applied for a patent on the nano-harpoon. Platt said scientists might use the probes in a range of applications, from basic science to human brain-computer interfaces and brain prostheses.

Donald said the new probe makes advances in those directions, but the insulation layers, electrical recording abilities and geometry of the device still need improvement.

Notes about this nanotechnology and neuroscience research

This research was supported by the Duke Institute for Brain Sciences, and grants from the National Institutes of Health (NS-79929, GM-65982, GM-78031).