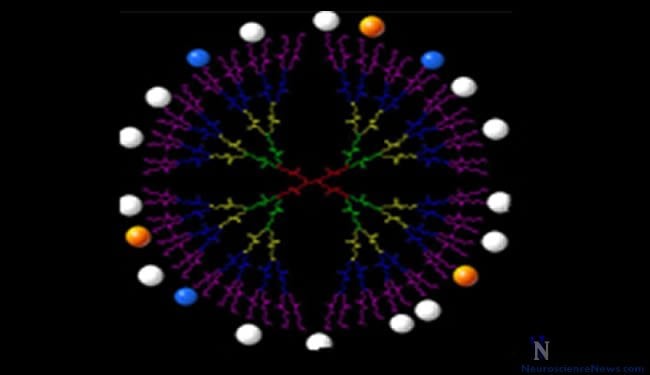 A team of scientists from Johns Hopkins and elsewhere have developed nano-devices that successfully cross the brain-blood barrier and deliver a drug that tames brain-damaging inflammation in rabbits with cerebral palsy.

A report on the experiments, conducted at Wayne State University in collaboration with the Perinatology Research Branch of the National Institute of Child Health and Human Development, before the lead and senior investigators moved to Johns Hopkins, is published in the April 18 issue of Science Translational Medicine.

The new approach holds therapeutic potential for a wide variety of neurologic disorders in humans that stem from neuro-inflammation, including Alzheimer’s disease, stroke, autism and multiple sclerosis, the investigators say.

The scientists caution that the findings are a long way from human application, but that the simplicity and versatility of the drug-delivery system make it an ideal candidate for translation into clinical use.

“In crossing the blood-brain barrier and targeting the cells responsible for inflammation and brain injury, we believe we may have opened the door to new therapies for a wide-variety of neurologic disorders that stem from an inflammatory response gone haywire,” says lead investigator Sujatha Kannan, M.D., now a pediatric critical-care specialist at Johns Hopkins Children’s Center.

Cerebral palsy (CP), estimated to occur in three out of 1,000 newborns, is a lifelong, often devastating disorder caused by infection or reduced oxygen to the brain before, during or immediately after birth. Current therapies focus on assuaging symptoms and improving quality of life, but can neither reduce nor reverse neurologic damage and loss of motor function.

Neuro-inflammatory damage occurs when two types of brain cells called microglia and astrocytes — normally deployed to protect the brain during infection and inflammation — actually damage it by going into overdrive and destroying healthy brain cells along with damaged ones.

Directly treating cells in the brain has long proven difficult because of the biological and physiological systems that have evolved to protect the brain from blood-borne infections. The quest to deliver the drug to the brain also involved developing a technique to get past the brain-blood barrier, spare healthy brain cells and deliver the anti-inflammatory drug exclusively inside the rogue cells.

To do all this, the scientists used a globular, tree-like synthetic molecule, known as a dendrimer. Its size — 2,000 times smaller than a red blood cell — renders it fit for travel across the blood-brain barrier. Moreover, the dendrimer’s tree-like structure allowed scientists to attach to it molecules of an anti-inflammatory NAC. The researchers tagged the drug-laced dendrimers with fluorescent tracers to monitor their journey to the brain and injected them into rabbits with cerebral palsy six hours after birth. Another group of newborn rabbits received an injection of NAC only.

Not only did the drug-loaded dendrimers make their way inside the brain but, once there, were rapidly swallowed by the overactive astrocytes and microglia.

“These rampant inflammatory cells, in effect, gobbled up their own poison,” Kannan says.

“The dendrimers not only successfully crossed the blood-brain barrier but, perhaps more importantly, zeroed in on the very cells responsible for neuro-inflammation, releasing the therapeutic drug directly into them,” says senior investigator Rangaramanujam Kannan, Ph.D., of the Center for Nanomedicine at the Johns Hopkins Wilmer Eye Institute.

Brain tissue analysis revealed that rabbits treated with dendrimer-borne NAC had notably fewer “bad” microglia — the inflammatory cells responsible for brain damage — as well as markedly lower levels of other inflammation markers. They also had better preserved myelin, the protein that sheaths nerves and is stripped or damaged in CP and other neurologic disorders. And even though CP is marked by neuron death in certain brain centers, animals who received dendrimer-borne NAC had higher number of neurons in the brain regions responsible for coordination and motor control, compared with untreated animals and those treated with NAC only.

Role of Lifestyle Factors in Alzheimer’s Risk and Disparities

The findings suggest that the treatment not only reduces inflammation in the cells, but may also prevent cell damage and cell death, the researchers said. The Kannans, who are married, say they plan to follow some treated animals into adulthood to ensure the improvements are not temporary.

A separate study, led by Rangaramanujam Kannan, has already demonstrated the therapeutic benefits of this approach in reversing retinal damage in rats with macular degeneration, the vision-robbing eye disorder that affects millions of older adults.

Jyoti and Balakrishnan are now at Hopkins and part of the ongoing research.

Funding: The study was funded by the Perinatology Research Branch of the Eunice Kennedy Shriver National Institute of Child Health & Human Development.