Mothers’ and babies’ brains ‘more in tune’ when mother is happy

Mothers’ and babies’ brains can work together as a ‘mega-network’ by synchronising brain waves when they interact. The level of connectivity of the brain waves varies according to the mum’s emotional state: when mothers express more positive emotions their brain becomes much more strongly connected with their baby’s brain. This may help the baby to learn and its brain to develop.

The research, published in the journal NeuroImage, used a method called dual electroencephalograhy (EEG) to look at brain signals in both mums and babies while they were interacting with each other. They found that mums and babies tend to synchronise their brain waves – an effect known as interpersonal neural connectivity – particularly in the frequency of 6-9 hertz, the infant alpha range.

By looking at the qualities and structure of the interpersonal neural connectivity using a mathematical method of network analysis, the researchers could see how information flowed within each separate brain, and also how the two brains operated together as a network.

Mothers and babies tend to spend a lot of time together in a positive emotional state, in which their brains are very connected. The study found that positive interaction, with lots of eye contact, enhances the ability of mother and infant brains to operate as a single system. This promotes efficient sharing and flow of information between mother and infant.

“From our previous work, we know that when the neural connection between mothers and babies is strong, babies are more receptive and ready to learn from their mothers,” said Dr Vicky Leong in the University of Cambridge’s Department of Psychology, who led the study. “At this stage of life, the baby brain has the ability to change significantly, and these changes are driven by the baby’s experiences. By using a positive emotional tone during social interactions, parents can connect better with their infants, and stimulate development of their baby’s mental capacity.”

The results also suggest that babies of depressed mothers may show less evidence of learning because of a weakened neural connection between mother and infant. Mothers who experience a persistently low or negative mental state due to clinical depression tend to have less interaction with their baby. Their speech is often flatter in tone, they make much less eye contact, and they are less likely to respond when their baby tries to get their attention.

“Our emotions literally change the way that our brains share information with others – positive emotions help us to communicate in a much more efficient way,” said Dr Leong. “Depression can have a powerfully negative effect on a parent’s ability to establish connections with their baby. All the social cues that normally foster connection are less readily available to the child, so the child doesn’t receive the optimal emotional input it needs to thrive.” 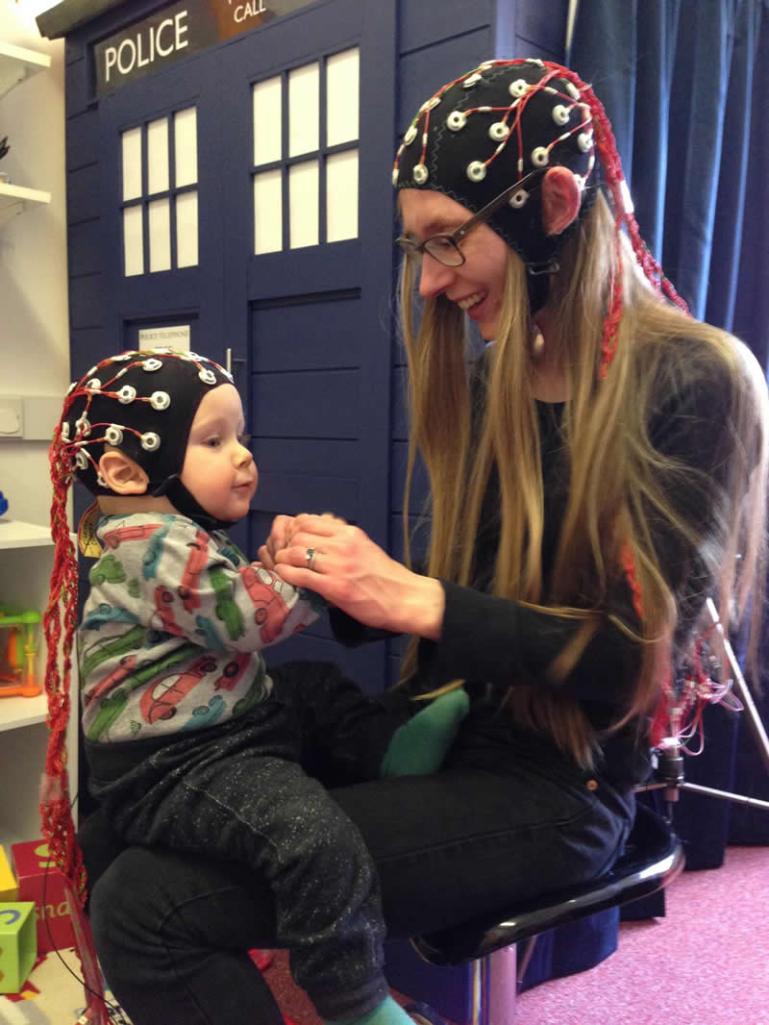 Mother and baby interacting. The image is credited to University of Cambridge.

Emotional communication between parents and their children is crucial during early life, yet little is known about its neural underpinnings. This is the first brain imaging study of two related individuals to investigate if and how babies’ interpersonal neural connectivity with their mothers is affected by the emotional quality of their social interaction.

As a social species, humans share emotional states with others. This work shows how emotions change the connection between two individuals at a neural level. The researchers say that their findings apply to many other types of affiliative bond, including between couples, close friends, and siblings, where each person is highly attuned to the other. The strength of the effect is likely to depend on how well the two people know each other and the level of trust between them.

Emotional communication between parents and children is crucial during early life, yet little is known about its neural underpinnings. Here, we adopt a dual connectivity approach to assess how positive and negative emotions modulate the interpersonal neural network between infants and their mothers during naturalistic interaction. Fifteen mothers were asked to model positive and negative emotions toward pairs of objects during social interaction with their infants (mean age 10.3 months) whilst the neural activity of both mothers and infants was concurrently measured using dual electroencephalography (EEG). Intra-brain and inter-brain network connectivity in the 6–9 Hz range (i.e. infant Alpha band) during maternal expression of positive and negative emotions was computed using directed (partial directed coherence, PDC) and non-directed (phase-locking value, PLV) connectivity metrics. Graph theoretical measures were used to quantify differences in network topology as a function of emotional valence. We found that inter-brain network indices (Density, Strength and Divisibility) consistently revealed strong effects of emotional valence on the parent-child neural network. Parents and children showed stronger integration of their neural processes during maternal demonstrations of positive than negative emotions. Further, directed inter-brain metrics (PDC) indicated that mother to infant directional influences were stronger during the expression of positive than negative emotional states. These results suggest that the parent-infant inter-brain network is modulated by the emotional quality and tone of dyadic social interactions, and that inter-brain graph metrics may be successfully applied to examine these changes in parent-infant inter-brain network topology.