A Walk in the Mall or Park? For Moms and Daughters, a Stroll in the Park is Best

Spending time together with family may help strengthen the family bond, but new research from the University of Illinois shows that specifically spending time outside in nature—even just a 20-minute walk—together can help family members get along even better.

The research is based on the attention restoration theory which describes how interaction with natural environments can reduce mental fatigue and restore attentional functioning. Many studies have supported the theory, but most, if not all, previous studies have only looked at the benefits of spending time in nature on an individual’s attention.

U of I family studies researchers Dina Izenstark and Aaron Ebata believed that if this theory worked for individuals it might also work for families and help to facilitate more positive family interactions and family cohesion. So last year they developed a new theoretical approach to studying the benefits of family-based nature activities.

“Past research shows that in nature individuals’ attention is restored but we wanted to know, what does that mean for family relationships? In our theoretical model we made the case that when an individual’s attention is restored, they are less irritable, have more self-control, and are able to pick up on social cues more easily. Because of all of those dynamics, we believe they should get along better with other family members,” Izenstark explains.

In a new study, Izenstark, now an assistant professor at San José State University, and Ebata, an associate professor and Extension specialist in the Department of Human Development and Family Studies at U of I, test their theory by looking at sets of moms and daughters (ages 10-12 years) who were asked to take a walk together in nature and a walk in a mall. The researchers then tested both the mothers’ and daughters’ attention and observed their family interactions after each walk.

The results were clear; a walk in nature increased positive interactions, helping the mothers and daughters get along better. It also restored attention, a significant effect for mothers in the study.

“We know that both moms and daughters experience mental or attentional fatigue. It’s common especially after a full day of concentrating at work or at school,” Izenstark says. “If you think about our everyday environments, not only are you at work, but maybe your cell phone is constantly buzzing, and you’re getting emails. With all the stimuli in our everyday environments, our attention is taxed more than we realize.”

Izenstark adds that in order to relieve some of that mental fatigue, people need to restore their directed attention. “In nature, you can relax and restore your attention which is needed to help you concentrate better. It helps your working memory.”

To test the mothers’ and daughters’ cohesiveness and whether attention was restored, 27 mom/daughter dyads met at a homelike research lab on campus before each walk. For 10 minutes they engaged in attention-fatiguing activities (i.e. solving math problems, word searches) while a recording of loud construction music played in the background. The researchers gave them a “pre-attention” test, and then set them out on a walk—one day to a nature arboretum, and then on another day to a local indoor mall. Each walk was 20 minutes long.

After returning from each walk, the moms and daughters were interviewed separately. They were given a “post-attention” test, and were surveyed about which location they found the most fun, boring, or interesting. They were then videotaped playing a game that required them to work together.

“It was unique that for the daughters walking with moms improved their attention. But for the moms, they benefitted from being in a nature setting. It was interesting to find that difference between the family members. But when we looked at their subjective reports of what they felt about the two settings, there was no question, moms and daughters both said the nature setting was more fun, relaxing, and interesting.” 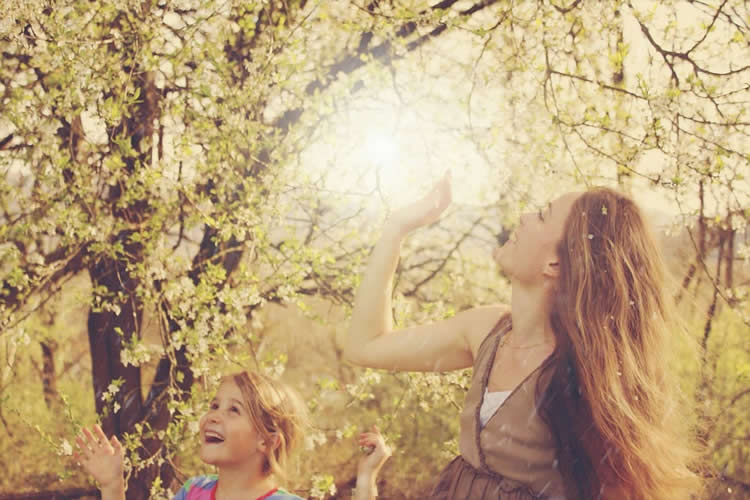 The results were clear; a walk in nature increased positive interactions, helping the mothers and daughters get along better. It also restored attention, a significant effect for mothers in the study NeuroscienceNews.com image is in the public domain.

The last aspect of the findings was in regards to improved cohesion or togetherness in the mom/daughter pairs. After analyzing the videotaped interactions during the game, the researchers only found an effect for nature; after the nature walk, moms and daughters displayed greater dyadic cohesion, a sense of unity, closeness, and the ability to get along, compared to the indoor walk.

Although the study only focused on mothers and daughters, Izenstark says that the overall aim of the research is to examine different ways in which nature affects family relationships in general.

“First and foremost I hope it encourages families to find ways to get outside together, and to not feel intimidated, thinking, ‘oh, I have to go outside for an hour or make it a big trip.’ Just a 20-minute walk around the neighborhood before or after eating dinner or finding pockets of time to set aside, to reconnect, not only can benefit families in the moment but a little bit after the activity as well.”

Funding: This work was supported by the USDA National Institute of Food and Agriculture, Hatch project # 1007220.

The Effects of the Natural Environment on Attention and Family Cohesion: An Experimental Study

This study explored 1) mothers’ and middle-childhood daughters’ attention after exposure to two different environments, and 2) their quality of family cohesion. Twenty-seven mother-daughter dyads participated in two counterbalanced experimental conditions—a 20-minute walk at an arboretum and a mall—followed by a family interaction task. Before and after each walk, we measured attention using digit span backwards and measured family cohesion using direct observational coding methods. Results showed that exposure to nature restored individual attention, especially for mothers; was perceived as more fun, relaxing, and interesting; and contributed to greater dyadic cohesion.

“The Effects of the Natural Environment on Attention and Family Cohesion: An Experimental Study” by Dina Izenstark and Aaron T. Ebata in Children, Youth and Environments. Published online November 2017 doi:10.7721/chilyoutenvi.27.2.0093