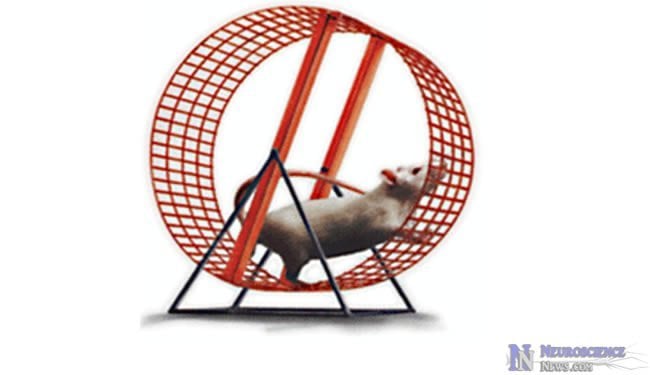 After inserting a gene into mice that increases choline transporter and as a result increases acetylcholine at the neuromuscular junctions, scientists found that engineered mice were able to run on treadmills twice as long as controls without the inserted gene.

It is believed that by increasing the choline transporter proteins, choline production increases which leads to more acetylcholine being available to be used for muscle contraction signaling.

These findings could lead to better understanding and treatment strategies for myasthenia gravis, muscular dystrophy, congestive heart failure, depression, schizophrenia, Alzheimer’s disease, ADHD and other cholinergic systems. Further details about this new marathon mouse research are available in the article below.

Vanderbilt study could lead to new treatments for neuromuscular diseases

Researchers at Vanderbilt University have “engineered” a mouse that can run on a treadmill twice as long as a normal mouse by increasing its supply of acetylcholine, the neurotransmitter essential for muscle contraction.

The finding, reported this month in the journal Neuroscience, could lead to new treatments for neuromuscular disorders such as myasthenia gravis, which occurs when cholinergic nerve signals fail to reach the muscles, said Randy Blakely, Ph.D., director of the Vanderbilt Center for Molecular Neuroscience.

Blakely and his colleagues inserted a gene into mice that increased the production of a protein called the choline transporter at the neuromuscular junction.

The choline transporter is vital to the capacity for muscle contraction – including the ability to breathe – because it regulates the supply of choline, the precursor to acetylcholine. “We reasoned that giving more of this protein might enhance muscle function and reduce nerve-dependent fatigue,” Blakely said.

Other researchers have manipulated the gene for the muscle tissue growth factor myostatin to produce animals with greater strength and endurance, but Blakely said this may be the first time “neural endurance” was enhanced by manipulating the nerves that innervate muscle.

Drugs that increase choline transporter activity “could represent a novel therapeutic strategy” for myasthenia gravis and a wide range of other disorders that involve cholinergic signaling deficits, Blakely said.

Last year, Blakely and his colleagues reported that a variation in the choline transporter gene is associated with the “combined” type of ADHD, which is characterized by both inattention and hyperactivity/impulsivity.

With funding from the National Institutes of Health (NIH), the researchers are developing choline transporter-targeted agents that could lead to new medications for these conditions.

The study was supported by the NIH.