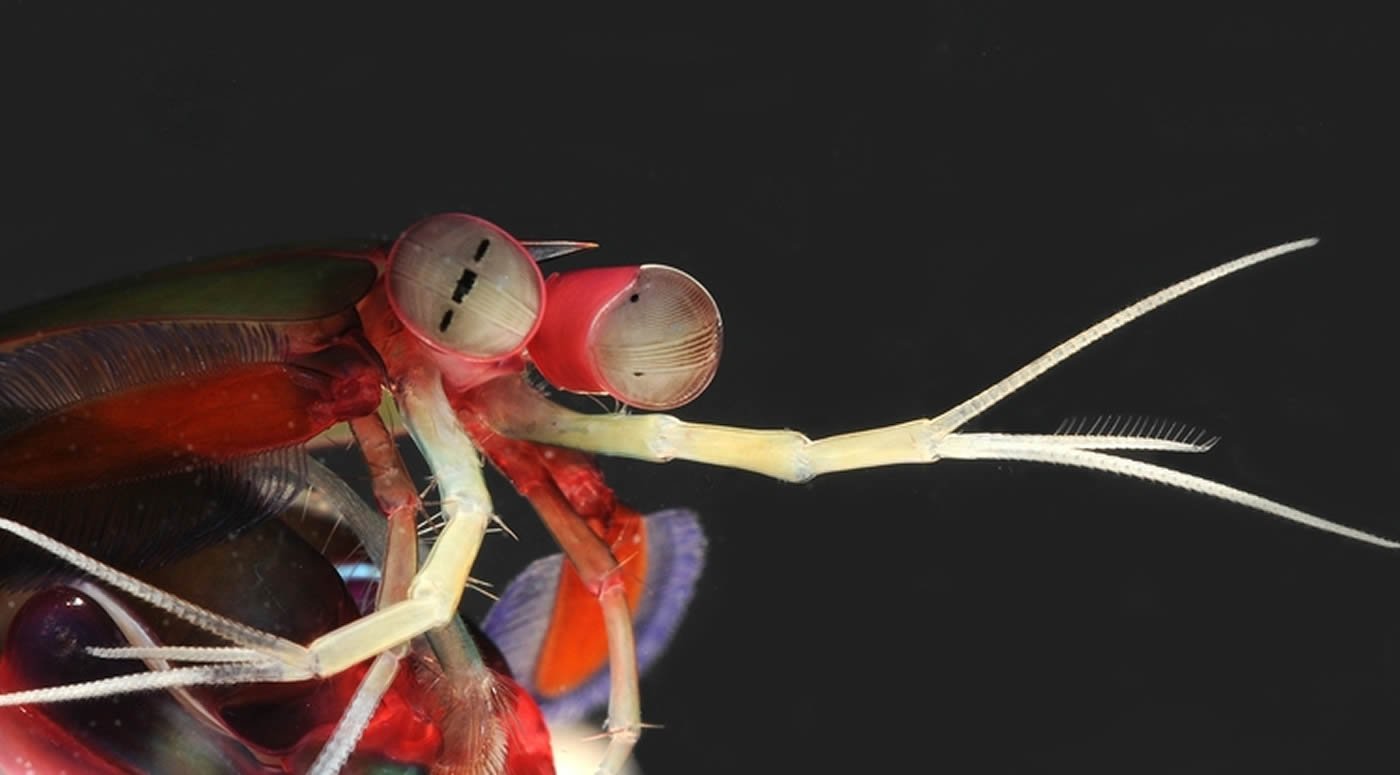 Summary: An eLife study reveals mantis shrimps have mushroom bodies in the brains. A key player in memory and learning in insects, mushroom bodies have not previously been identified in crustaceans. Researchers believe their finding could shed light on how brain structures evolved in arthropods.

Mantis shrimps have mushroom bodies in their brains, structures that are well known from insects but not from crustaceans. The findings question the most commonly held scenario retracing how brain structures evolved in arthropods.

Taking a close look at the neural systems of mantis shrimp, top arthropod predators of the coral reef, researchers led by Nick Strausfeld at the University of Arizona and Gabriella Wolff, now at the University of Washington, discovered brain structures that — according to textbook wisdom — shouldn’t be there.

Known as mushroom bodies, these structures, which play a key role in forming memories and learning, had only been found in insects — until now. The findings appear to question the most commonly held scenario retracing how brain structures evolved in arthropods.

Since it has been universally accepted that insects evolved from crustaceans, and mushroom bodies are exclusive to insects (or so it seemed), most biologists agree that these unique brain structures evolved after the insect lineage split off from the crustacean lineage.

The implications of the study, which is published in the open-access journal eLIFE, point to one of two possible scenarios, both equally likely to stir up a buzz in the scientific community. According to Strausfeld, a Regents’ Professor in UA’s Department of Neuroscience and the senior author on the paper, one interpretation suggests that mushroom bodies are much more ancient than scientists realized and were lost in almost all crustaceans except mantis shrimp, a group known as stomatopods that are the sister group of crustaceans such as shrimp, lobster and crabs. In the other scenario, mushroom bodies evolved independently in stomatopods and are analogous to their counterparts in insects, through a process known as convergent evolution.

Comprising more than 4 million species, arthropods are the largest and most diverse group of animals, including crustaceans, insects and spiders. All arthropods are thought to descend from a common ancestor, most likely a creature that inhabited the ocean floor more than 550 million years ago. The exact branching of the arthropod family tree at that early time remains murky, a sketchy picture veiled by the layers of deep time and gaps in the fossil record.

By visualizing cells and neural connections in the brains of mantis shrimp, the authors of the study show that among crustaceans, only mantis shrimp possess true mushroom bodies. Intriguingly, though, they also found some attributes of these iconic structures in close relatives of the mantis shrimp: cleaner shrimp, pistol shrimp and land-living hermit crabs.

This may not be a coincidence, the authors suggest, arguing that among crustaceans, those mantis shrimp relatives are the only known group that depends on memory of exact locations. It may therefore not be a coincidence that precisely those taxa have retained mushroom bodies because “one proposed driver of the evolution of large mushroom bodies is the requirement to recall the exact locations and properties of places from which to obtain food,” as the authors write.

When the researchers stained mantis shrimp brain tissue for learning and memory proteins known from the fruit fly Drosophila and studied them under the microscope, they found that the characteristic mushroom body lobes that typify their counterparts in insects “lit up very intensively.” (Left image: Mantis shrimp; right image: Cockroach) The image in the center shows the entire 3-D reconstructed mushroom body of the mantis shrimp. NeuroscienceNews.com image is credited to Wolff et al.

“In insects, mushroom bodies are necessary for learning and memory,” Strausfeld says. “We showed earlier that in cockroaches they are necessary for memorizing place. This may be true of most insects. To find this structure in a crustacean is really exciting, because it suggests that it may have arisen in deep time: an ancient center, retained for over half a billion years, to perform this function.”

Using a technique known as immunohistochemistry, Wolff and Strausfeld first prepared very thin sections of mantis shrimp brain tissue and applied antibodies that specifically detect certain proteins known to play important roles in learning and memory. Because these antibodies are coupled to fluorescent markers, researchers can trace the exact locations of these proteins as they outline the anatomical architecture of the nervous system.

“When we study the sections stained for learning and memory proteins under the microscope, the characteristic mushroom body lobes that typify insect mushroom bodies light up very intensively,” Strausfeld says.

The team is confident that the structures it identified are indeed mushroom bodies. Whereas in the past just three neuroanatomical characters were routinely used to identify these hallmark structures in insect brains, the team expanded this suite of characters to 14 and, according to Strausfeld, “to our delight, as do insects, mantis shrimp reveal every one of them.”

The study’s authors acknowledge that while intriguing, their findings provide no definitive conclusion to exactly how and when mushroom bodies evolved. The hypothesis that identical centers of such stunning complexity have evolved convergently in stomatopods and insects is just as fascinating as the alternative — that of mushroom bodies evolving early in the evolution of all arthropods. Strausfeld and his co-authors are not betting on one as more likely than the other.

“We can’t rule out convergence,” says Wolff, “because it is possible for complex structures to evolve multiple times, although it is not the most probable scenario.”

As top predators that use their formidable vision to stalk and hunt prey over considerable distances, mantis shrimp have to evaluate and remember complex features of their environment, the authors note. Similarly, cleaner shrimp, pistol shrimp and land-living hermit crabs rely on advanced spatial and temporal memory skills not shared by other crustacean species, which may have lost their mushroom bodies over the course of evolution.

Researchers investigate overactive immune cells as cause of COVID-19 deaths

In previous studies, Wolff and Strausfeld discovered structures resembling mushroom bodies in taxa that evolved before crustaceans and insects, such as centipedes, spiders, even flatworms. Says Wolff: “I think it is most likely that these structures did exist in the last common ancestor of arthropods, and the species that don’t have them have secondarily lost them.”

The authors hope that studying mushroom body transcriptomes, the patterns of gene expression characterizing their participating neurons, will serve as the ultimate arbiter.

“The question we ultimately want to answer is: What was the earliest brain?” Strausfeld said. “Our research gives us an insight into an ancient brain structure. The earliest brain was not simply defined as the anterior end of the nervous system, but something more elaborate. Fossilized tracks made over 520 million years ago show us that even the earliest brains could make a decision of what to do next and where to return, and those decisions might very well have been informed not simply by immediate sensory information but also by recall.”

An insect-like mushroom body in a crustacean brain