Summary: MediTrain, a new app-based program that uses a closed-loop algorithm to tailor the length of meditation sessions to a person’s ability, can improve memory and attention in younger people.

Scientists at UC San Francisco have developed a personalized digital meditation training program that significantly improved attention and memory in healthy young adults – a group already at the peak of brain health – in just six weeks.

The intervention, called MediTrain, utilizes a closed-loop algorithm that tailors the length of the meditation sessions to the abilities of the participants, so they are not discouraged by their initial attempts to focus attention on their breath, a time-honored meditation technique.

Scientists tested the program in a randomized, double-blind, placebo-controlled trial at UCSF with 59 participants between 18 and 35 years old. The results were published on Monday, June 3, 2019, in Nature Human Behaviour.

The magnitude of the effects on attention and memory, which were unexpected for healthy young adults, were similar to what has been seen in previous studies of middle-aged adults after months of in-person training or intensive meditation retreats.

The app-based program, however, required just 20 to 30 minutes of cumulative practice each day, composed of many very short meditation periods. In the beginning, participants were prompted to pay attention to their breath for just 10 to 15 seconds at a time. As they improved over the six weeks, the application challenged them to increase the amount of time they could maintain focus, which averaged several minutes after six weeks.

“This is not like any meditation practice that exists, as far as we are aware,” said senior author Adam Gazzaley, MD, PhD, professor of neurology, physiology and psychiatry and executive director of Neuroscape at UCSF. “We took an ancient experiential treatment of focused meditation, reformulated it and delivered it through a digital technology, and improved attention span in millennials, an age group that is intimately familiar with the digital world, but also faces multiple challenges to sustained attention.”

MediTrain made some concessions to tradition. Before they began, participants listened to recorded meditation instructions from Jack Kornfield, PhD, a meditation teacher who co-founded Spirit Rock Meditation Center north of San Francisco, and an author on the study. Then, they used the techniques on their own, without spoken instruction and with their eyes closed.

But MediTrain had other digital features that aren’t present in the traditional practice of breath meditation and that may have been the reason why it achieved such strong results over such a short period and with such a healthy population.

For one thing, it underscored the need to pay attention by requiring participants to regularly check in on how they were doing.

At the end of each brief meditation segment, participants were asked to indicate whether they had been able to pay continuous attention for the allotted time, pressing a button on the left side of an iPad screen if the answer was no, and a button on the right if the answer was yes. For those who said yes, the application adapted to a slightly longer meditation period; for those who said no, the period was shortened.

The researchers believe the participatory nature of the design was important.

“Not only do you learn how to maintain focus on your breath, but you are also required to introspect on how well you’re able to do that,” Gazzaley said. “We believe that’s part of the active ingredient of this treatment.”

The results were impressive. On their first day, participants could stay focused on their breath for an average of only 20 seconds. After 30 days of training, that rose to an average of six minutes.

This improvement, in turn, conferred better performance on other, much more complicated tasks that scientists use to assess sustained attention and working memory. Not only did the MediTrain participants perform more consistently on attention tests than the placebo group, the scientists also found a correlation between how long participants were able to focus on their breath and how consistently they performed on these tests. The MediTrain group also performed better than the placebo group on a test of working memory, measured after the intervention.

“We thought it was a long shot to see these types of improvements in a group this young and healthy,” said David Ziegler, PhD, director of multimodal biosensing in the technology division at UCSF’s Neuroscape, and the first author of the paper. “But it speaks to the power of the method.”

Using electroencephalography (EEG) to record brain activity in a subset of the participants in each group, the researchers identified parts of the brain, particularly in the front, that altered their activity as participants learned to stabilize their attention with meditation training.

According to Ziegler, “These frontal brain areas, which are important for controlling attention, showed greater moment-to-moment consistency in their activity after the meditation training.” They are also known to strengthen their activity when other areas of the brain called the “default mode network,” that are associated with distracted thinking and self-preoccupation, get weaker. Deactivation in the default mode network is also associated with better performance on tasks that require focused attention. 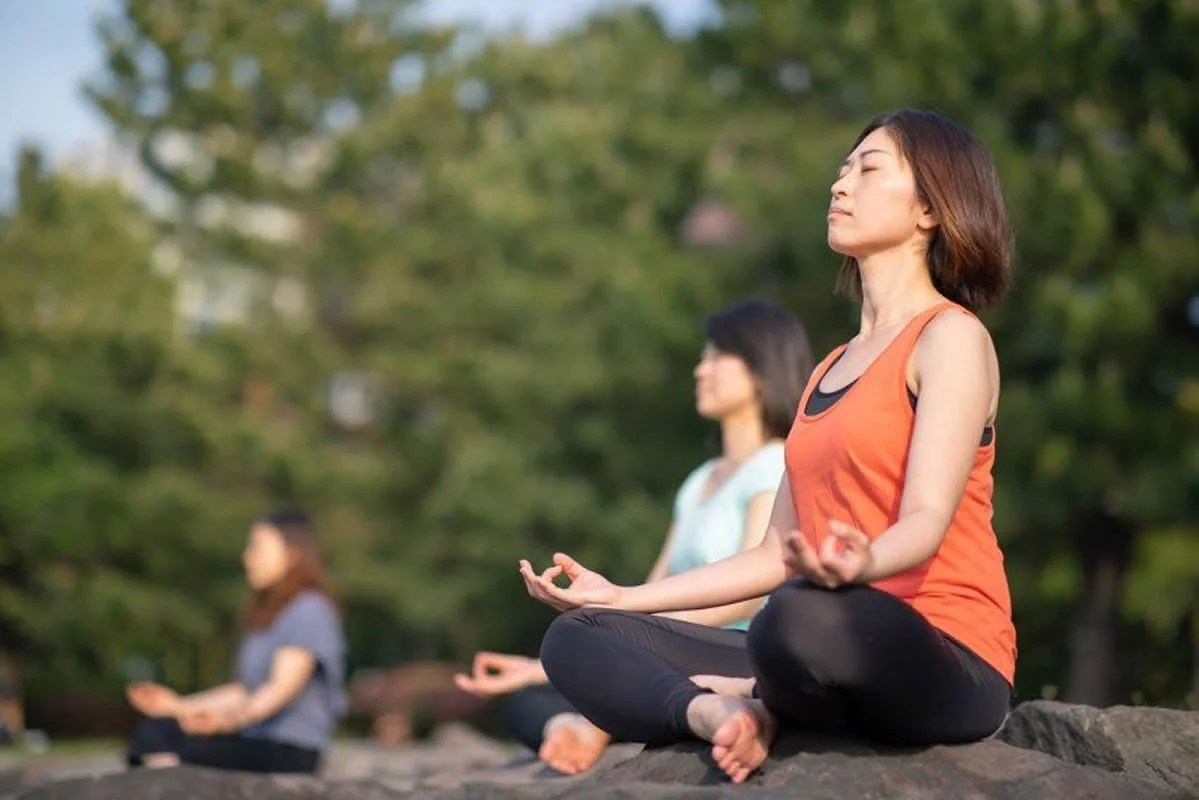 For one thing, it underscored the need to pay attention by requiring participants to regularly check in on how they were doing. The image is credited to UCSF.

The researchers said that MediTrain, which has been patented by the University of California, holds promise for a younger generation that is accustomed to digital devices but faces multiple challenges to sustained attention from heavy use of media and technology.

The breath meditation – a seemingly simple, yet quite demanding task – worked as well in cultivating sustained attention as other more intellectually and physically challenging training programs that have been developed at Neuroscape, a translational neuroscience center at UCSF engaged in technology creation and scientific research to better assess and optimize brain function for all people.

Its very simplicity may fill a particular need created by the frenetic pace of today’s world.

“Many of us struggle with challenges to our attention, which seem to be exacerbated by modern technology,” Gazzaley said. “What we’ve done here is flip this story around by creating and studying a digital delivery system that makes cognitive benefits of traditional focused attention meditation more personalized, accessible and deliverable.”

Disclosures: Adam Gazzaley is co-founder, shareholder, member of the board of directors, and advisor for Akili Interactive, a company that produces therapeutic video games. MediTrain and the apps used for the control condition are not currently associated with Akili.

Attention is a fundamental cognitive process that is critical for essentially all aspects of higher-order cognition and real-world activities. Younger generations have deeply embraced information technology and multitasking in their personal lives, school and the workplace, creating myriad challenges to their attention. While improving sustained attention in healthy young adults would be beneficial, enhancing this ability has proven notoriously difficult in this age group. Here we show that 6 weeks of engagement with a meditation-inspired, closed-loop software program (MediTrain) delivered on mobile devices led to gains in both sustained attention and working memory in healthy young adults. These improvements were associated with positive changes in key neural signatures of attentional control (frontal theta inter-trial coherence and parietal P3b latency), as measured by electroencephalography. Our findings suggest the utility of delivering aspects of the ancient practice of focused-attention meditation in a modern, technology-based approach and its benefits on enhancing sustained attention.