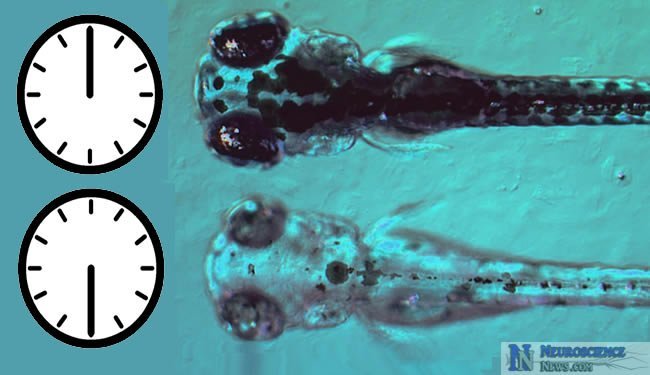 A compound named longdaysin can be used to control the biological clock, new research shows.

Researchers were able to lengthen the biological clock of larval zebra fish over ten hours by manipulating levels of longdaysin. These new findings could help lead to better management of sleeping disorders, jet lag and other biological clock related problems.

The article below offers more details about longdaysin’s effect on the biological clock and a new screening technique used.

Using an automated screening technique developed by pharmaceutical companies to find new drugs, a team of researchers from UC San Diego and three other research institutions has discovered a molecule with the most potent effects ever seen on the biological clock.

Dubbed by the scientists “longdaysin,” for its ability to dramatically slow down the biological clock, the new compound and the application of their screening method to the discovery of other clock-shifting chemicals could pave the way for a host of new drugs to treat severe sleep disorders or quickly reset the biological clocks of jet-lagged travelers who regularly travel across multiple time zones.

“Theoretically, longdaysin or a compound like it could be used to correct sleep disorders such as the genetic disorder familial advanced sleep syndrome, which is characterized by a clock that’s running too fast,” said Steve Kay, dean of UCSD’s Division of Biological Sciences, who headed the research team, which published its findings in the December 14 issue of the journal PLoS Biology. “A compound that makes the clock slow down or speed up can also be used to phase-shift the clock—in other words, to bump or reset the hands of the clock. This would help your body catch up when it is jet lagged or reset it to a normal day-night cycle when it has been thrown out of phase by shift work.”

The researchers demonstrated the dramatic effects of longdaysin by lengthening the biological clocks of larval zebra fish by more than 10 hours.

“Longdaysin is the champion by far in how much it can move the clock,” said Kay, whose laboratory at UCSD had found compounds in previous studies that could shift the biological clock by as much as several hours at most. “We were really surprised to find out how much you can slow down the biological clock with this compound and still have a clock that is running.”

Biologists in Kay’s laboratory and the nearby Genomics Institute of the Novartis Research Foundation, who were led by Tsuyoshi Hirota, the first author of the paper, discovered longdaysin by screening thousands of compounds with a chemical robot that tested the reaction of each compound with a line of human bone cancer cells that the researchers’ genetically modified so that they could visually see changes in the cells’ circadian rhythms. This was done by attaching in the cells a clock gene to a luciferase gene used by fireflies to glow at night, so that the cells glowed when the biological clock was activated. A chemical robot screened more than 120,000 potential compounds from a chemical library into individual micro-titer wells, a system used by drug companies called high-throughput screening, and automatically singled out those molecules found to have the biggest effects on the biological clock.

Once Kay’s group had isolated longdaysin, it turned to biological chemists in Peter Schultz’s laboratory at The Scripps Research Institute to characterize the molecule and figure out the mechanisms of how it lengthened the biological clock. That analysis showed that three separate protein kinases on the compound were responsible for the dramatic effect of longdaysin, one of which, CK1alpha, had previously been ignored by chronobiology researchers.

“Because this compound doesn’t just hit one target, but multiple targets, it showed us that if you want to shift the biological clock in a major way you have to hit multiple kinases,” said Kay.

The researchers then showed that longdaysin had the same effect of lengthening the biological clock in mouse tissue samples and zebra fish larvae that carried luciferase genes attached to their clock genes.

“We were really encouraged to find that when we added longdaysin to these living zebra fish, we lengthened the biological clock and didn’t see any obvious deleterious effects,” said Kay. “They grow normally while they are exposed to this compound. That showed us that our high-throughput assay works and accurately predicts how the compound works on the biological clock of a living fish. The next thing to do is to try this in a mammalian system.”

Kay’s research team plans to test longdaysin on mice in the near future, but its goal isn’t to develop longdaysin into a drug.

“Longdaysin is not as potent as we would like,” he adds. “This will be a tool for research.”

Other co-authors of the paper besides Hirota and Schultz were Warren Lewis, Eric Zhang, Ghislain Breton and David Traver of UCSD; Jae Wook Lee of TSRI; Xianzhong Liu, Michael Garcia Eric Peters of the Genomics Institute of the Novartis Research Foundation; and Pierre Etchegaray of the University of Massachusetts Medical School.

The study was funded by grants from the National Institutes of Health.