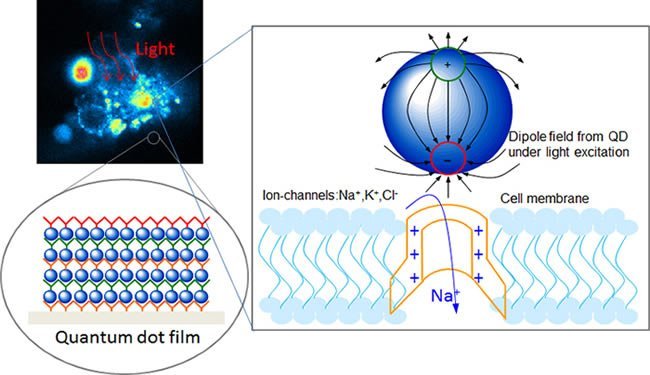 By harnessing quantum dots, tiny light-emitting semiconductor particles a few billionths of a meter across, researchers at the University of Washington (UW) have developed a new and vastly more targeted way to stimulate neurons in the brain. Being able to switch neurons on and off and monitor how they communicate with one another is crucial for understanding and, ultimately, treating a host of brain disorders, including Parkinson’s disease, Alzheimer’s, and even psychiatric disorders such as severe depression. The research was published today in the Optical Society’s (OSA) open-access journal Biomedical Optics Express.

Doctors and researchers today commonly use electrodes on the scalp, or implanted within the brain, to deliver zaps of electricity to stimulate cells. Unfortunately, these electrodes activate huge swaths of neural territory, made up of thousands or even millions of cells, of many different types. That makes it impossible to tease out the behavior of any given cell, or even of particular cell types, to understand cellular communication and how it contributes to the disease process.

Ideally, nerve cells would be activated in a non-invasive way that is also highly targeted. A promising method for doing this is photostimulation, essentially, controlling cells with light. Recently, for example, a team of Stanford University researchers altered mammalian nerve cells to carry light-sensitive proteins from single-celled algae, allowing the scientists to rapidly flip the cells on and off, just with flashes of light. The problem with this process, however, is that the light-controlled cells must be genetically altered to perform their parlor trick.

An alternative, says the UW team, led by electrical engineer Lih Y. Lin and biophysicist Fred Rieke, is to use quantum dots – tiny semiconductor particles, just a few billionths of a meter across, that confine electrons within three spatial dimensions. When these otherwise trapped electrons are excited by electricity, they emit light, but at very precise wavelengths, determined both by the size of the quantum dot and the material from which it is made. Because of this specificity, quantum dots are being explored for a variety of applications, including in lasers, optical displays, solar cells, light-emitting diodes, and even medical imaging devices.

In the paper published today, Lin, Rieke and colleagues have extended the use of quantum dots to the targeted activation of cells. In laboratory experiments, the researchers cultured cells on quantum dot films, so that the cell membranes were in close proximity to the quantum-dot coated surfaces. The electrical behavior of individual cells was then measured as the cells were exposed to flashes of light of various wavelengths; the light excited electrons within the quantum dots, generating electrical fields that triggered spiking in the cells.

“We tried prostate cancer cells first because a colleague happened to have the cell line and experience with them, and they are resilient, which is an advantage for culturing on the quantum dot films,” Lin says. “But eventually we want to use this technology to study the behavior of neurons, so we switched to cortical neurons after the initial success with the cancer cells.”

The experiments, says Lin, show that “it is possible to excite neurons and other cells and control their activities remotely using light. This non-invasive method can provide flexibility in probing and controlling cells at different locations while minimizing undesirable effects.”

“Many brain disorders are caused by imbalanced neural activity,” Rieke adds, and so “techniques that allow manipulation of the activity of specific types of neurons could permit restoration of normal-balanced-activity levels” including the restoration of function in retinas that have been compromised by various diseases. “The technique we describe provides an alternative tool for exciting neurons in a spatially and temporally controllable manner. This could aid both in understanding the normal activity patterns in neural circuits, by introducing perturbations and monitoring their effect, and how such manipulations could restore normal circuit activity.”

How Cranberries Could Improve Memory and Ward off Dementia

So far, the technique has only been applied to cells cultured outside the body; to gain insight into disease processes and be clinically useful, it would need to be performed within living tissue. To do so, Lin says, “we need to modify the surface of the quantum dots so that they can target specific cells when injected into live animals.” The dots also need to be non-toxic, unlike those used in the Biomedical Optics Express report, which often had detrimental effects on the cells to which they were attached. “One solution would be developing non-toxic quantum dots using silicon,” Lin says.