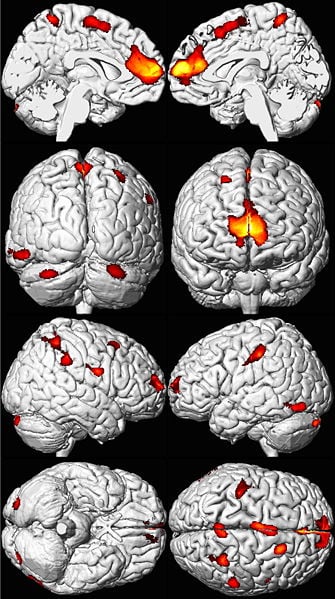 While the role of genes in schizophrenia and mental disorders is well established, the effect of toxic chemicals in the environment is only just beginning to emerge. This MRI shows decreased volume in the prefrontal cortex in the brains of adults who were exposed to lead as children. This image is credited to Cecil KM, Brubaker CJ, Adler CM, Dietrich KN, Altaye M, et al and is used for illustrative purposes. It is not connected to the research.
Home
Featured

Mice engineered with a human gene for schizophrenia and exposed to lead during early life exhibited behaviors and structural changes in their brains consistent with schizophrenia. Scientists at Columbia University’s Mailman School of Public Health and the Johns Hopkins University School of Medicine say their findings suggest a synergistic effect between lead exposure and a genetic risk factor, and open an avenue to better understanding the complex gene-environment interactions that put people at risk for schizophrenia and other mental disorders.

Going back to 2004, work by scientists at the Mailman School suggested a connection between prenatal lead exposure in humans and increased risk for schizophrenia later in life. But a big question remained: How could lead trigger the disease? Based on his own research, Tomás R. Guilarte, PhD, senior author of the new study, believed the answer was in the direct inhibitory effect of lead on the N-methyl-D-aspartate receptor (NMDAR), a synaptic connection point important to brain development, learning, and memory. His research in rodents found that exposure to lead blunted the function of the NMDAR. The glutamate hypothesis of schizophrenia postulates that a deficit in glutamate neurotransmission and specifically hypoactivity of the NMDAR can explain a significant portion of the dysfunction in schizophrenia.

In the new study, Dr. Guilarte, professor and chair of the department of Environmental Health Sciences at the Mailman School, and his co-investigators focused on mice engineered to carry the mutant form of Disrupted-in-Schizophrenia-1 (DISC1), a gene that is a risk factor for the disease in humans. Beginning before birth, half of the mutant DISC1 mice were fed a diet with lead, and half were given a normal diet. A second group of normal mice not expressing the mutant DISC1 gene were also split into the two feeding groups. All mice were put through a battery of behavioral tests and their brains were examined using MRI.

Mutant mice exposed to lead and given a psychostimulant exhibited elevated levels of hyperactivity and were less able to suppress a startle in response to a loud noise after being given an acoustic warning. Their brains also had markedly larger lateral ventricles—empty spaces containing cerebrospinal fluid—compared with other mice. These results mirror what is known about schizophrenia in humans.

While the role of genes in schizophrenia and mental disorders is well established, the effect of toxic chemicals in the environment is only just beginning to emerge. The study’s results focus on schizophrenia, but implications could be broader.

“We’re just scratching the surface,” says Dr. Guilarte. “We used lead in this study, but there are other environmental toxins that disrupt the function of the NMDAR.” One of these is a family of chemicals in air pollution called polycyclic aromatic hydrocarbons or PAHs. “Similarly, any number of genes could be in play,” adds Dr. Guilarte, noting that DISC1 is among many implicated in schizophrenia.

Future research may reveal to what extent schizophrenia is determined by environmental versus genetic factors or their interactions, and what other mental problems might be in the mix. One ongoing study by Dr. Guilarte is looking at whether lead exposure alone can contribute to deficits of one specialized type of neuron called parvalbumin-positive GABAergic interneuron that is known to be affected in the brain of schizophrenia patients. Scientists are also interested to establish the critical window for exposure—whether in utero or postnatal, or both.

The study’s first author is Bagrat Abazyan, MD, a post-doctoral fellow in the Behavioral Neurobiology and Neuroimmunology Lab, Department of Psychiatry and Behavioral Sciences at Johns Hopkins School of Medicine, which is led by Mikhail Pletnikov, MD, PhD, senior co-author of the paper and principal developer of the DISC1 mouse model. Neuroimaging studies were led by Susumu Mori, PhD, Department of Radiology, also of Johns Hopkins.