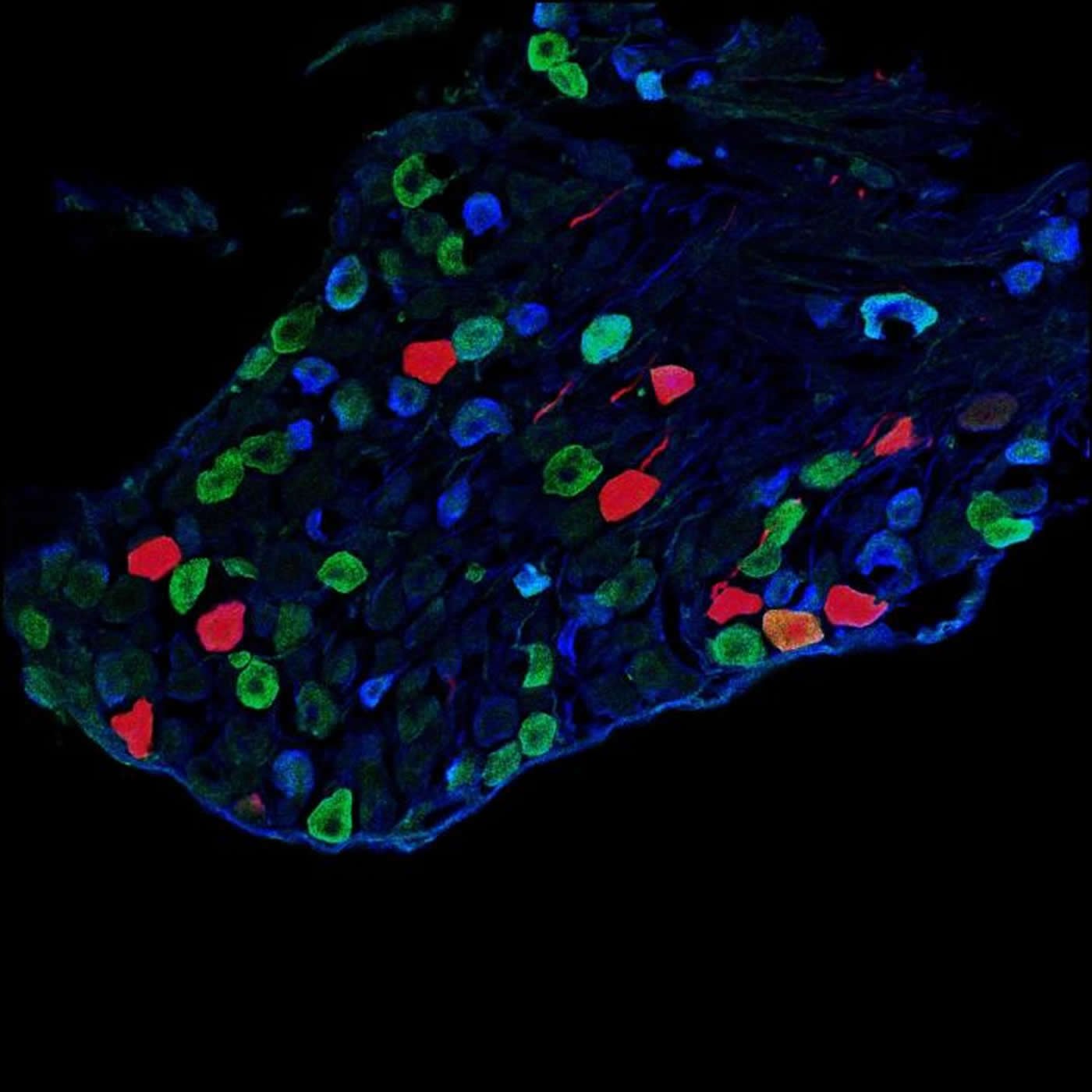 This is a cross-section from a dorsal root ganglion showing sensory neurons that transmit light-touch information from the skin to Y1 neurons within the spinal cord. The image is credited to Salk Institute.

Scratching the surface of how your brain senses an itch

Summary: Researchers identified a set of neurons in the spinal cord that transmits a light-touch signal from the skin to the brain. NPY-Y1 signaling regulates the transmission of innocuous tactile information by establishing thresholds for touch discrimination and mechanical itch reflexes. The findings shed new light on the neurobiological basis of chronic itching.

Light touch plays a critical role in everyday tasks, such as picking up a glass or playing a musical instrument. The sensation is also an essential part of the body’s protective defense system, alerting us to objects in our environment that could cause us to fall or injure ourselves. In addition, it is part of the detection system that has evolved to protect us from biting insects, such as those that cause malaria and Lyme disease, by eliciting a feeling of an itch when an insect lands on your skin.

Salk researchers have discovered how neurons in the spinal cord help transmit such itch signals to the brain. Published in the journal Cell Reports on July 16, 2019, their findings help contribute to a better understanding of itch and could lead to new drugs to treat chronic itch, which occurs in such conditions as eczema, diabetes and even some cancers.

“The takeaway is that this mechanical itch sensation is distinct from other forms of touch and it has this specialized pathway within the spinal cord,” says Salk Professor Martyn Goulding, holder of the Frederick W. and Joanna J. Mitchell Chair and a senior author of the new work.

Goulding and his colleagues had previously discovered a set of inhibitory neurons in the spinal cord that act like cellular brakes, keeping the mechanical itch pathway in the spinal cord turned off most of the time. Without these neurons, which produce the neurotransmitter neuropeptide Y (NPY), the mechanical itch pathway is constantly on, causing chronic itch. What the researchers didn’t know was how the itch signal, which under normal circumstances is suppressed by the NPY neurons, is transmitted to the brain to register the itch sensation.

David Acton, a postdoctoral fellow in the Goulding lab, hypothesized that when the NPY inhibitory neurons are missing, neurons in the spinal cord that normally transmit light touch begin to act like an accelerator stuck in the “on” position. Acton then identified a candidate for these “light touch neurons,” a population of excitatory neurons in the spinal cord that express the receptor for NPY, the so-called Y1 spinal neurons.

To test whether these neurons were indeed acting like an accelerator, Acton undertook an experiment that involved selectively getting rid of both the NPY “brake” and Y1 “accelerator” neurons. Without Y1 neurons, mice didn’t scratch, even in response to light-touch stimuli that normally make them scratch. Moreover, when Acton gave the animals drugs that activated the Y1 neurons, the mice scratched spontaneously even in the absence of any touch stimuli. The Goulding team was then able to show that the NPY neurotransmitter controls the level of Y1 neuron excitability; in other words, NPY signaling acts as a kind of thermostat to control our sensitivity to light touch. Data from other labs has found that some people with psoriasis have lower than average levels of NPY. This may mean their brakes on mechanical itching are less effective than other people’s, a potential cause of their itching.

While Y1 neurons transmit the itch signal in the spinal cord, other neurons are thought to be responsible for mediating the final response in the brain but more research is needed to continue mapping out the full pathway, according to the researchers. Understanding this will help suggest targets for drugs to turn down the sensation of itch in people who are overly responsive and could lead to ways to address chronic itch.

“By working out mechanisms by which mechanical itch is signaled under normal circumstances, we might then be able to address what happens in chronic itch,” says Acton.

Other researchers on the study were Xiangyu Ren, Stefania Di Costanzo, Antoine Dalet and Steeve Bourane of the Salk Institute; and Ilaria Bertocchi and Carola Eva of the University of Torino.

Funding: The study was supported by the National Institutes of Health and the Caterina Foundation.

Summary
Acute itch can be generated by either chemical or mechanical stimuli, which activate separate pathways in the periphery and spinal cord. While substantial progress has been made in mapping the transmission pathway for chemical itch, the central pathway for mechanical itch remains obscure. Using complementary genetic and pharmacological manipulations, we show that excitatory neurons marked by the expression of the neuropeptide Y1 receptor (Y1Cre neurons) form an essential pathway in the dorsal spinal cord for the transmission of mechanical but not chemical itch. Ablating or silencing the Y1Cre neurons abrogates mechanical itch, while chemogenetic activation induces scratching. Moreover, using Y1 conditional knockout mice, we demonstrate that endogenous neuropeptide Y (NPY) acts via dorsal-horn Y1-expressing neurons to suppress light punctate touch and mechanical itch stimuli. NPY-Y1 signaling thus regulates the transmission of innocuous tactile information by establishing biologically relevant thresholds for touch discrimination and mechanical itch reflexes.