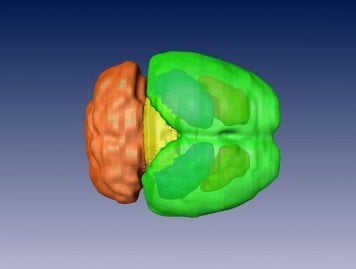 Image shows a mouse brain 3-D reconstruction based on magnetic resonance imaging (MRI). The forebrain is seen in green, the midbrain in yellow and the cerebellum in orange. The forebrain region has been made partially transparent to show the underlying regions (from left to right, the hippocampus and caudate). The image is credited to Garland Lab, UC Riverside.
Home
Featured

Is Athleticism Linked to Brain Size?

Is athleticism linked to brain size? To find out, researchers at the University of California, Riverside performed laboratory experiments on house mice and found that mice that have been bred for dozens of generations to be more exercise-loving, have larger midbrains than those that have not been selectively bred this way.

Theodore Garland’s lab measured the brain mass of these uniquely athletic house mice, bred for high voluntary wheel-running, and analyzed their high-resolution brain images. The researchers found that the volume of the midbrain, a small region of the brain that relays information for the visual, auditory, and motor systems, in the bred-for-athleticism mice was nearly 13 percent larger than the midbrain volume in the control or “regular” mice.

“To our knowledge, this is the first example in which selection for a particular mammalian behavior, high voluntary wheel running in house mice in our set of experiments, has been shown to result in a change in size of a specific brain region,” said Garland, a professor of biology and the principal investigator of the research project.

In Garland’s lab, selection for high voluntary wheel running in lab house mice has been ongoing for nearly 20 years — or more than 65 generations of house mice. To analyze brain mass and volume on independent samples of house mice, the researchers dissected the brains into two different regions, the cerebellum, a region of the brain crucial for controlling movement, and the non-cerebellar areas. They then weighed these sections separately.

The cerebellum is important for coordination. The midbrain, a part of the non-cerebellar area that contains a variety of sensory and motor nuclei, is essential for reward learning, motivation and reinforcing behavior. Previously, species of mammals and birds with larger brains have been shown to have higher survivability in novel environments.

The researchers found that compared to regular mice, those mice that had been selectively bred for high voluntary wheel-running had significantly greater midbrain volume as well as larger non-cerebellar brain mass, but not larger cerebella or total brain mass.

The primary question the researchers sought to answer in their study is whether selection on a particular behavioral trait, such as voluntary exercise, using an experimental evolution paradigm, has resulted in a change in brain size. An additional question they posed is whether any change in brain size involves the entire brain or is “mosaic,” that is, involving only a section or some sections of the brain.

“Our finding that mice bred for high levels of voluntary exercise have an enlarged non-cerebellar brain mass and an enlarged midbrain, but do not show a statistically significant increase in overall brain mass or volume supports the mosaic theory of brain evolution,” Garland said.

What implications the current research has for humans is not immediately clear.

“It is possible that individual differences in the propensity or ability for exercise in humans are associated with individual differences in the size of the midbrain, but no one has studied that,” Garland said. “If it were possible to take MRIs of babies’ midbrains before these babies started ‘exercising’ and then follow these babies through life, it may be that inherent, genetically-based differences in midbrain size detected soon after birth will influence how much they would be likely to exercise as adults.”

The research was supported by a grant to Garland from the National Science Foundation.

Next, the researchers plan to conduct another mouse study to investigate whether increased exercise activity impacts brain size.

Garland was joined in the study by the following researchers at UCR: E. M. Kolb, E. L. Rezende, L. Holness, A. Radtke, S. K. Lee, and A. Obenaus.