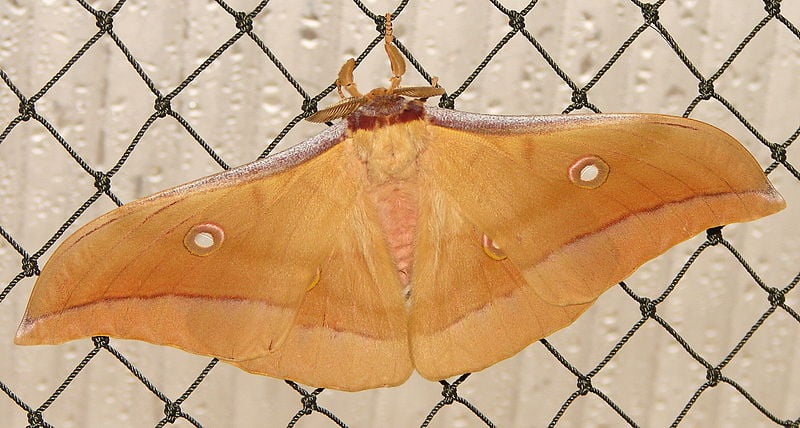 In a new study, a male silkmoth drives a two wheeled robot in order to track down the the sex pheromone usually given off by a female mate. Credited to Ivo Antušek.
Home
Featured

A small, two-wheeled robot has been driven by a male silkmoth to track down the sex pheromone usually given off by a female mate.

The robot has been used to characterise the silkmoth’s tracking behaviours and it is hoped that these can be applied to other autonomous robots so they can track down smells, and the subsequent sources, of environmental spills and leaks when fitted with highly sensitive sensors.

The results have been published in the journal, Bioinspiration and Biomimetics.

The male silkmoth was chosen as the ‘driver’ of the robot due to its characteristic ‘mating dance’ when reacting to the sex pheromone of the female. Once the male is stimulated by the pheromone it exhibits a distinctive walking pattern: straight-line and zigzagged walking consisting of several turns followed by a loop of more than 360°.

Lead author of the research, Dr Noriyasu Ando, said: “The simple and robust odour tracking behaviour of the silkmoth allows us to analyse its neural mechanisms from the level of a single neuron to the moth’s overall behaviour. By creating an ‘artificial brain’ based on the knowledge of the silkmoth’s individual neurons and tracking behaviour, we hope to implement it into a mobile robot that will be equal to the insect-controlled robot developed in this study.”

The researchers, from the University of Tokyo, attached the silkmoth to a free-moving polystyrene ball at the front of the robot which was used for overall control, much like the ball in a computer mouse.

Two 40 millimetre fans were attached at the front to divert the pheromone-containing air to the on-board moth, the researchers believe the fans are comparable to the wings of the silkmoth that flap to generate air flow across its antennae.

A 1800 millimetre wind tunnel was used in the experiments; the pheromone and robot were placed at opposite ends. Fourteen silkmoths were used in the study and all of them were able to successfully guide the robot towards the source.

The researchers also introduced a turning bias to the experiments, changing the power of one of the robot’s two motors so it veered towards one side when moving. This put the silkmoth into an extraordinary situation and required it to adapt and change its behaviour.

“The best way to elicit adaptive behaviours of insects is to put them into extraordinary situations. The turning bias in our study is analogous to a situation in which we try to ride unbalanced bicycles. We need training to ride such bicycles smoothly but the silkmoth overcomes the situation with only simple and fast sensory-motor feedbacks,” said Dr Ando.

It is important that the chemical sensors attached to a potential robot have a short response and processing time when tracking down odours continuously, which is why the researchers also investigated the effect of a time delay between the movement of the silkmoth and the response of the motor.

“Most chemical sensors, such as semiconductor sensors, have a slow recovery time and are not able to detect the temporal dynamics of odours as insects do. Our results will be an important indication for the selection of sensors and models when we apply the insect sensory-motor system to artificial systems,” continued Dr Ando.

Notes about this robotics research article

Contact: Michael Bishop – Institute of Physics
Source: IOP press release
Image Source: Image credited to Ivo Antušek via Wikimedia Commons. The image is licensed as public domain. Feel free to use.
Video Source: Video titled “A small robot being driven by a moth” is available via the Institute of Physics at YouTube.
Original Research: Abstract for “Odour-tracking capability of a silkmoth driving a mobile robot with turning bias and time delay” by N Ando, S Emoto and R Kanzaki in Bioinspiration and Biomimetics. Published online February 5 2013 doi:10.1088/1748-3182/8/1/016008