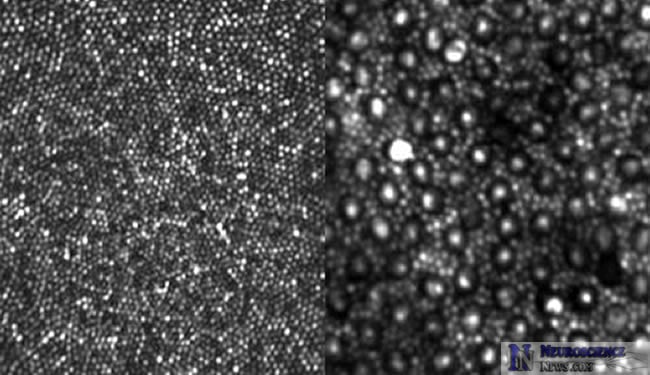 First Images of Rod Photoreceptors in the Living Human Eye

Scientists today reported that the tiny light-sensing cells known as rods have been clearly and directly imaged in the living eye for the first time. Using adaptive optics (AO), the same technology astronomers use to study distant stars and galaxies, scientists can see through the murky distortion of the outer eye, revealing the eye’s cellular structure with unprecedented detail. This innovation, described in two papers in the Optical Society’s (OSA) open access journal Biomedical Optics Express, will help doctors diagnose degenerative eye disorders sooner, leading to quicker intervention and more effective treatments.

“While therapies are only emerging, the ability to see the cells you are trying to rescue represents a critical first step in the process of restoring sight,” says researcher Alfredo Dubra of the University of Rochester in New York, who led the team of researchers from Rochester, Marquette University, and the Medical College of Wisconsin (MCW), Milwaukee. “It’s impossible to overemphasize how important early detection is to eye disease.”

“One of the major hurdles in detecting retinal disease is that by the time it can be perceived by the patient or detected with clinical tools, significant cellular damage has often already occurred,” adds team member Joseph Carroll of MCW.

The breakthrough that is ushering in a new era of eye disease research, diagnosis, and treatment is an improved design of a non-invasive adaptive optics imaging system. Dubra and his colleagues were able to push the device’s resolution to its optical limits of nearly 2 microns (a micron is 1/1,000 of a millimeter), or the approximate diameter of a single rod in the human eye.

Rods are much more numerous than cones and are vastly more sensitive to light. With the optical design method successfully demonstrated by Dubra’s team, even the smallest cone cells at the center of the retina, known as the foveal center, can be seen very clearly. Rods can be seen clearly in a less central retinal location. (Fig. 1)

“This is a really exciting breakthrough,” says Steve Burns, a professor in the School of Optometry at Indiana University, who is not involved in the Biomedical Optics Express research. “Imaging contiguous rod mosaics will allow us to study the impact of a whole new class of blinding disorders on the retina. Since many of the eye diseases most amenable to intervention affect the rods, this should become a major tool for determining what treatments work best for those disorders.”

In astronomy, adaptive optics is able to correct for the blurring effect of Earth’s atmosphere, effectively removing the “twinkling” from starlight and rendering cosmic objects as very sharp points of light. To achieve this correction, the AO system requires a reference point—either a bright, nearby star or an artificial “guide star” produced in the upper atmosphere by lasers mounted on a telescope. By monitoring that reference point, AO systems use a deformable mirror to create the exact but opposite distortion that is happening in the atmosphere. The result is a clearer image with much greater resolution.

In 1997, David Williams of the University of Rochester led the group that first demonstrated using AO technology to study the interior of the human eye. In this system, called an adaptive optics ophthalmoscope, a laser creates a reference point that is used to correct the blurring of the image obtained with a fundus camera. Today the fundus camera is commonly replaced by a second laser for imaging, which is known as an adaptive optics scanning laser ophthalmoscope. By moving the laser point across the retina and correcting the distortion along the way, line-by-line an accurate image emerges, in much the same way that a CRT monitor renders an image.

Though earlier AO systems could effectively image cones and have become a mainstay of high-resolution retinal imaging research, the smaller rods, which outnumber cones 20 to 1 in the retina, have eluded clear and contiguous observation in the living eye.

The breakthrough in the design of the AO instrument that led to clearly visualizing rods was, according to Dubra, “embarrassingly simple, and relied on well-known equations and concepts.” By simply folding the spherical mirrors that act as lenses in the instrument into a three-dimensional structure, the image quality of the retina was improved sufficiently to clearly resolve the contiguous rod mosaic, as well as the entire cone mosaic at the foveal center.

“By combining careful optical engineering, excellent adaptive optics control, and knowledge of the visual system the authors have made a major advancement in both biomedical imaging and vision science,” says Burns.

Fentanyl May Cause Autism-Like Behavior in Young Mice

According to the researchers, their next step is to develop a clinical model that could be widely available. A related task is simplifying and teaching the art of interpreting AO images to guide clinical decisions about diagnosis and treatment.

When that occurs, hopefully in the next 5 to 10 years, doctors will likely be able to routinely peer into a living human eye with such precision and clarity that they will be able to see and evaluate individual rods–and do three things never before possible: accurately describe the physical presentation of specific rod disorders–the “phenotype” of a disease, intervene with early treatment at the first sign of disease, and even determine how individual cells are responding to a specific treatment.

“That’s what’s really exciting about this imaging device: it can really make a difference in a patient’s life,” says Carroll. “The ability to now resolve these cells opens up new possibilities for improving care that researchers have been anticipating for a long time—such as using the information in these retinal images to aid in targeting, delivering, and evaluating therapies.”

The papers appear as part of a special feature issue of Biomedical Optics Express on “Cellular Imaging of the Retina.”