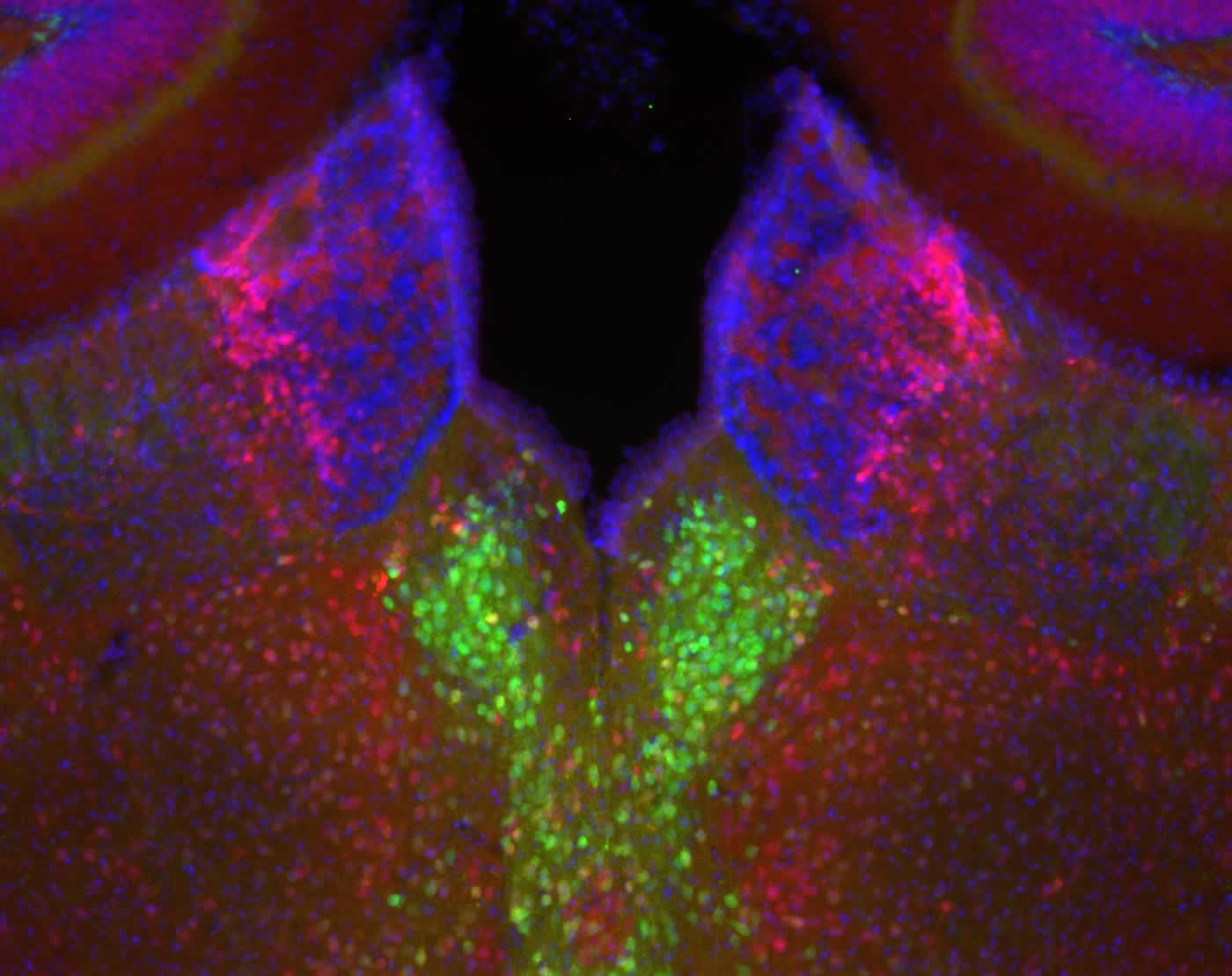 As a consequence, the endogenous cannabinoid system of the habenula might represent a new therapeutic target in the management of some psychiatric conditions. Image is for illustrative purposes only and shows the habenula of a mouse.

Memory is not a simple box of souvenirs. Memories are also, and most importantly, a safety system for organisms. With the help of negative memories, known as “aversive” memories, we can avoid a threat that we have already confronted. Researchers from Inserm and University of Bordeaux have just discovered that the cannabinoid receptors of the brain control these memories that are crucial for survival. This study is published in Neuron.

When confronted by danger, every individual has to make a crucial choice. This type of “simple” decision may determine his/her destiny: if the fire alarm goes off, we have learned to heed it and flee, and not to ignore it. In the same way, we avoid food and drinks that might have made us sick in the past.

The body is thus equipped with neurological mechanisms that help it to adjust its behaviour in response to a stimulus. Such is the case with aversive memories, a key survival process, which prepares the body to avoid these potential dangers effectively. These memories are accompanied by physiological responses (fright and flight) that enable one to get away from a dangerous situation.

Although the role of the habenula, a central region of the brain, in this phenomenon has received a great deal of attention in recent years, the same is not true of the endogenous cannabinoid system of the habenular neurons, on which Giovanni Marsicano and his team (particularly Edgar Soria-Gomez) have focused. This system involves the type 1 cannabinoid receptors. These receptors, the activity of which is normally regulated by endocannabinoids – the body’s own molecules – are the target of the main psychoactive components of cannabis.

The researchers conditioned mice so that they reacted to certain danger signals (sounds or smells). When they exposed them to these signals, mice that were deficient in cannabinoid receptors in the habenula expressed neither the fear nor the repulsion observed in normal mice. Interestingly, this impaired reaction did not apply to neutral or positive memories, which remained unchanged in these mice.

At molecular level, the scientists observed that, although the functioning of the habenula normally involves two molecules (acetylcholine and glutamate), the defect observed in these mice is caused by an imbalance in neurotransmission involving only acetylcholine.

“These results demonstrate that the endogenous cannabinoid system in the habenula exclusively controls the expression of aversive memories, without influencing neutral or positive memories, and does so by selectively modulating acetylcholine in the neural circuits involved,” explains Giovanni Marsicano, Inserm Research Director.

The control of these particular memories is an integral part of diseases associated with the emotional process, such as depression, anxiety or drug addiction. As a consequence, the endogenous cannabinoid system of the habenula might represent a new therapeutic target in the management of these conditions.

About this memory and neuroscience research

Summary
Expression of aversive memories is key for survival, but the underlying brain mechanisms are not fully understood. Medial habenular (MHb) axons corelease glutamate and acetylcholine onto target postsynaptic interpeduncular (IPN) neurons, but their role in aversive memories has not been addressed so far. We found that cannabinoid type 1 receptors (CB1R), key regulators of aversive responses, are present at presynaptic terminals of MHb neurons in the IPN. Conditional deletion of CB1R from MHb neurons reduces fear-conditioned freezing and abolishes conditioned odor aversion in mice, without affecting neutral or appetitively motivated memories. Interestingly, local inhibition of nicotinic, but not glutamatergic receptors in the target region IPN before retrieval, rescues these phenotypes. Finally, optogenetic electrophysiological recordings of MHb-to-IPN circuitry revealed that blockade of CB1R specifically enhances cholinergic, but not glutamatergic, neurotransmission. Thus, presynaptic CB1R control expression of aversive memories by selectively modulating cholinergic transmission at MHb synapses in the IPN.

A Good Night’s Sleep Is a Tonic to Remember