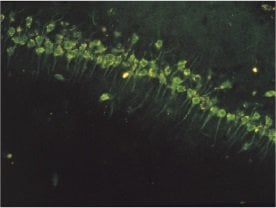 Neurons in a subsection of the adult rat hippocampus are stained with a monoclonal antibody (yellow) that enhances learning and memory. A portion of this antibody is where GLYX-13 came from. Credited to Dr. Joseph Moskal, Ph.D., Northwestern University
Home
Electrophysiology

GLYX-13, a molecular cousin to ketamine, induces similar antidepressant results without the street drug side effects, reported a study funded by the National Institute of Mental Health (NIMH) that was published last month in Neuropsychopharmacology.

Major depression affects about 10 percent of the adult population and is the second leading cause of disability in U.S. adults, according to the World Health Organization. Despite the availability of several different classes of antidepressant drugs such as selective serotonin reuptake inhibitors (SSRIs), 30 to 40 percent of adults are unresponsive to these medications. Moreover, SSRIs typically take weeks to work, which increases the risk for suicide.

Enter NMDA (N-methyl-D-aspartate) receptor modulators. In the 1970s, researchers linked the receptors to learning and memory. Biotech and pharmaceutical companies in the 1980s attempted to apply chemical blockers to these receptors as a means to prevent stroke. But blocking these receptors led to the opposite effect—–the rise of cardiovascular disease. Research in the field dampened until a glutamate receptor antagonist already approved for anesthesia, and known on the streets as “Special K”, ketamine, made headlines in the early 2000s. Human clinical studies demonstrated that ketamine can ward off major and bipolar depressive symptoms within 2 hours of administration and last for several days.

Ketamine is fraught with serious side effects including excessive sleepiness, hallucinations, and substance abuse behavior.

“Ketamine lit the field back up,“ said Joseph Moskal, Ph.D., a molecular neurobiologist at Northwestern University and senior study author. “Our drug, GLYX-13, is very different. It does not block the receptor ion channel, which may account for why it doesn’t have the same side effects.”

Moskal’s journey with GLYX-13 came about from his earlier days as a Senior Staff Fellow in NIMH’s Intramural Research Program. While at NIMH, he created specific molecules, monoclonal antibodies, to use as new probes to understand pathways of learning and memory. Some of the antibodies he created were for NMDA receptors. When he moved to Northwestern University, Moskal converted the antibodies to small protein molecules. Comprised of only four amino acids, GLYX-13 is one of these molecules.

Results of the Study

Protein studies indicated an increase in the hippocampus of the NMDA receptor NR2B and a receptor for the chemical messenger glutamate called AMPA. Electrophysiology studies in this brain region showed that GLYX-13 and ketamine promoted long-lasting signal transmission in neurons, known as long-term potentiation/synaptic plasticity. This phenomenon is essential in learning and memory. The researchers propose how GLYX-13 works: GLYX-13 triggers NR2B receptor activation that leads to intracellular calcium influx and the expression of AMPA, which then is responsible for increased communication between neurons.

These results are consistent with data from a recent Phase 2 clinical trial, in which a single administration of GLYX-13 produced statistically significant reductions in depression scores in patients who had failed treatment with current antidepressants. The reductions were evident within 24 hours and persisted for an average of 7 days. After a single dose of GLYX-13, the drug’s antidepressant efficacy nearly doubled that seen with most conventional antidepressants after 4–6 weeks of dosing. GLYX-13 was well tolerated and it did not produce any of the schizophrenia-like effects associated with other NMDA receptor modulating agents.

NMDA receptors need a molecule each of the amino acid chemical messengers glutamate and glycine to become activated. Moskal speculates that GLYX-13 either directly binds to the glycine site on the NMDA receptor or indirectly modulates how glycine works with the receptor. Resulting activation of more NMDA and AMPA receptors leads to an increase in memory, learning—and antidepressant effects. By contrast, ketamine only blocks the NMDA receptor, but also increases the activity of the AMPA receptor. Knowledge of these mechanisms could lead to the development of more effective antidepressants.

GLYX-13 is now being tested in a Phase 2 repeated dose antidepressant trial, where Moskal and his colleagues at Naurex, Inc., a biotechnology company he founded, hope to find in humans the optimal dosing for the drug. They also want to see if this molecule, and others like it, regulate other NMDA receptor subtypes—there are over 20 of them—and whether it will work on other disorders, such as schizophrenia, attention-deficit hyperactivity disorder, and autism.
“One could call NMDA modulators such as GLYX-13 ‘comeback kids,’” said Moskal. “A toolkit that I developed in 1983 is now setting the stage in 2013 for the development of possible new therapeutics that may provide individuals suffering from depression with a valuable new treatment option.”

Notes about this neuropsychopharmacology and electrophysiology research