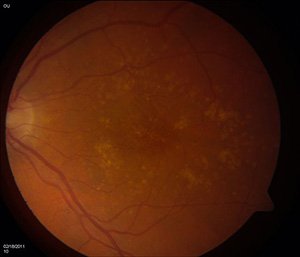 An international team of researchers, led by scientists at The Genome Institute at Washington University School of Medicine in St. Louis and the University of Michigan School of Public Health in Ann Arbor, has identified a gene mutation linked to age-related macular degeneration (AMD), the leading cause of blindness in Americans over age 50.

It’s not the first gene variation linked to AMD, but it is the first to suggest a mechanism where the variant may contribute to the disease. The researchers report that a change in the C3 gene, which plays a role in inflammation and in the body’s immune response, also contributes to macular degeneration.

The study was published online Sept. 15 in the journal Nature Genetics.

“In past studies of AMD, there is a clear relationship between the complement pathway and the onset of this disease,” said co-senior investigator Elaine R. Mardis, PhD. “The complement system is part of the immune system that helps amplify or ‘complement’ the efforts of immune cells to fight infections. So the idea is that the gene variant interferes with the complement pathway’s normal function throughout life, and that can damage the retina over time, which ultimately leads to AMD’s emergence.”

The search turned up two gene variants: one in the C3 complement gene, and an alteration that had been identified in previous studies of macular degeneration.

“Finding the variant that had been identified previously helped confirm that we were on the right track,” explained Mardis, a professor of genetics and co-director of the Genome Institute. “And it’s likely this new variant was discovered because of the very large number of patients whose DNA we sequenced. By analyzing so many AMD patients, it was possible to find variants that may not have been identified in a smaller patient sample and to establish that this C3 gene variant is unique to people with AMD.”

The two gene variants together contribute to a three-fold increased risk for macular degeneration. Mardis and her co-investigators hypothesize that the mutations work in tandem to increase AMD risk by interfering with the inactivation of complement in the retina.

“When you have these mutations, interactions between the proteins that cascade in the complement pathway are altered,” Mardis said. “And when they’re altered, the secondary response to infection, which involves complement, also is altered. So our hypothesis is that over time, because of the role of the complement pathway in the retina, damage begins to accrue, and eventually that leads to vision loss.”

The next step, according to Mardis, is to look at additional DNA regions in the more than 2,000 patients and controls who were involved in this study. The researchers will broaden their look across the genome and go beyond the 10 regions of DNA that were analyzed in this study.

Our Social Interactions Begin at a Young Age

“We hope to identify new genes — perhaps more genes in the complement pathway, perhaps genes in other inflammatory response pathways, or in areas we wouldn’t have anticipated finding any genes related to AMD,” she said. “We’re taking a wide look at the genome to see what turns up.”

Notes about this genetics and macular degeneration research