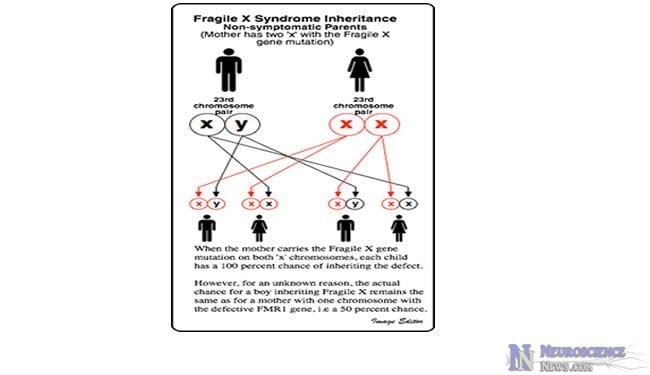 FXTAS symptoms are mainly caused by overproduction of toxic mRNA, making this research very important for researchers working with FXTAS.

More details about this FXTAS research are in the article below.

Effect on brain modified with drugs, could lead to therapeutic target.

Expression of a toxic RNA that leads to Fragile X Tremor Ataxia Syndrome is modifiable by genetic or pharmacologic means, according to new research from U-M Medical School scientists.

In the study published online today in the journal Public Library Of Science Genetics, U-M’s Peter K. Todd, M.D., Ph.D., led a team of researchers who examined the expression of a toxic messenger RNA (mRNA) seen in the brains of those afflicted with the syndrome.

Fragile X Tremor Ataxia Syndrome (FXTAS) is usually found in older adults, who often have grandchildren afflicted with Fragile X. Those affected with the adult form of the syndrome have slow gait, tremors, dementia and balance problems.  The symptoms are caused by overproduction of a toxic mRNA in the brain that causes neurodegeneration.

“We found that the expression of this toxic mRNA is dynamic and modifiable,” says Todd, who is an assistant professor in U-M’s Department of Neurology. “There is a potential for modifying the increased production of the toxic RNA with drugs that inhibit histone acetylation.”

FXTAS is an under-diagnosed syndrome that was only discovered about 10 years ago, when researchers discovered the grandfathers of children with Fragile X were displaying common symptoms. It is one of three known Fragile X disorders that result from changes in the Fragile X gene. The altered gene can be passed down through generations, affecting both genders at different stages in life.

About 1 in 3,000 men and about 1 in 5,200 women in the general population will develop symptoms of FXTAS, according to the National Fragile X Foundation. Current estimates suggest that about 30-40 percent of male Fragile X gene carriers over 50 years of age, within families already known to have someone with a Fragile X-associated disorder, will ultimately exhibit some features of FXTAS.

Using both fruit fly models and human cells, the U-M researchers found that drugs that inhibit histone acetyltransferases modify the brain changes associated with FXTAS and could provide the pathway to a therapeutic target.

“These drugs that we used are too toxic for use in patients but the important finding is that we have a better idea of what’s driving this syndrome and proof of principle that those brain changes can be modified,” says Todd.

“Our findings underscore the need for developing more specific modifiers of expression at the Fragile X gene, with the long-term goal of developing preventive therapy for FXTAS patients,” says Todd.

Todd stressed the need for more research into neurodegenerative diseases like FXTAS,which can be devastating to families.

“This should be a high priority. Neurodegeneration robs people of their humanity,” Todd says. “To lead a happy and fruitful life, you have to protect the brain.”

About the University of Michigan’s Department of Neurology: The department is an academic medical department with a full range of activities in patient care, education and research. The Neurology inpatient service provides care for acutely ill patients with neurologic disease and includes a dedicated intensive care unit, a separate stroke unit, and inpatient epilepsy monitoring beds. Our faculty also investigate the causes, treatments, natural history and phenotypic spectrum of inherited neurologic disorders, such as Alzheimer’s disease. Our studies range from describing novel inherited neurologic syndromes ; to family studies including genetic mapping ; discovering genes for neurologic diseases; and the creation and analysis of laboratory animals of neurologic disease.

New Role for Blood-Brain Barrier in Neuron Function and Damage