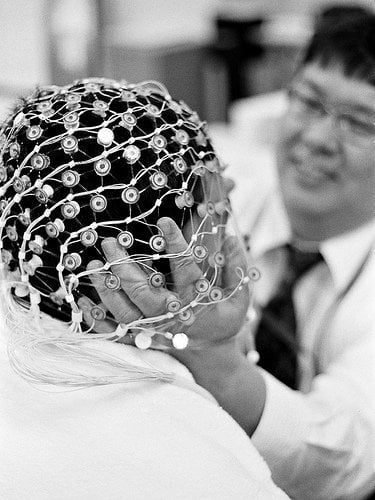 Reanalysis of a highly publicized study which claimed EEG identified awareness in some patients diagonised as being in a vegetative state points to a number of flaws in statistical results and methodologies.Due to the flaws, the reanalysis concluded it was impossible to determin whether any of the subjects were able to demonstrate any degree of awareness during the original testing. The image is credited to Janne Moren.
Home
Featured

A team of researchers led by Weill Cornell Medical College is calling into question the published statistics, methods and findings of a highly publicized research study that claimed bedside electroencephalography (EEG) identified evidence of awareness in three patients diagnosed to be in a vegetative state.

The new reanalysis study led by Weill Cornell neurologists Drs. Andrew Goldfine,Jonathan Victor, and Nicholas Schiff, published in the Jan. 26 issue of the journal Lancet, reports the statistical results and methodology used by a research team led by University of Western Ontario scientists and published online Nov. 9, 2011, also in the Lancet, was flawed in a number of crucial ways. Due to these errors, the reanalysis concludes it is impossible to determine whether or not these vegetative state study subjects demonstrated any degree of awareness during the testing.

The University of Western Ontario researchers in the original study set out to use bedside EEG technology to identify any changes in brain activity in vegetative patients and also healthy subjects as controls. During the study, each subject was asked to either imagine moving their hand or foot each time they heard an electronic beep. The brain activity following hand or foot commands was recorded using EEG and then compared in the study. The published study claimed that three of the 16 tested vegetative patients successfully performed the task, along with 9 of the 12 healthy controls. The reanalysis of this study is important, the Weill Cornell researchers say, because if the method was indeed valid, it would mark an important breakthrough in the field — the first evidence using a bedside testing method that patients reported to be in a vegetative state could perform high-level cognitive tasks.

“Sadly, our reanalysis of the research team’s original data shows these particular methods do not work, and it is important that scientists, physicians, and most importantly, the families of severely brain injured patients understand that the conclusions reached in the original study were most likely due to chance findings,” says the corresponding author of the reanalysis, Dr. Schiff, the Jerold B. Katz Professor of Neurology and Neuroscience, professor of neuroscience in the Brain and Mind Research Institute and professor of public health at Weill Cornell.

“We see the urgency and need every single day for tests that can be used to help establish awareness and consciousness in brain injured patients. However we won’t help patients or their families by using a flawed research method and data that cannot accurately provide the information we are all hoping to find,” says Dr. Schiff, who is also a neurologist at NewYork-Presbyterian Hospital/Weill Cornell Medical Center.

“The reanalysis points to the importance of the peer review process, data sharing and analytic tools to confirm research findings, especially those which are biologically complex and where misinterpretation could have major implications on clinical practice,” says study co-author Dr. Joseph J. Fins, the E. William Davis Jr., MD Professor of Medical Ethics and chief of the Division of Medical Ethics at Weill Cornell, and director of medical ethics at NewYork-Presbyterian/Weill Cornell. “EEG techniques are an inexpensive and portable method of assessment, and a premature endorsement and dissemination of this technique could provide families with false hope about whether patients thought to be vegetative are in fact conscious,” says Dr. Fins.

“We set out to validate the original Lancet study findings about EEG, not disprove them, because it is critically important that tests purporting to assert the presence of consciousness be carefully vetted by peer-review,” says senior author Dr. Victor, the Fred Plum Professor of Neurology and professor of neuroscience in the Brain and Mind Research Institute at Weill Cornell and a neurologist at NewYork-Presbyterian/Weill Cornell.

The reanalysis study doesn’t criticize the use of bedside EEG technology for detection of consciousness, but questions the appropriateness of the statistical methodology applied to the data, Dr. Victor explained. The Weill Cornell research team’s main finding was that the original study failed to take into account several aspects of EEG signals present in the vegetative patients who were said to show awareness—including the contamination of the EEG signals with muscle activity and the random characteristics of the EEG over extended periods of time, he says. Also, basic task-related EEG signals observed in the healthy subjects were not identifiable in any of the vegetative patients.

“The false-positive EEG brain activity responses in vegetative patients may have been reported because of flawed statistical methods, a problem that was exacerbated because a large number of statistical features were extracted from a small amount of data,” says lead author Dr. Goldfine, assistant professor of neurology at the Burke Medical Research Institute, a neurologist at New York Presbyterian /Weill Cornell and Burke Rehabilitation Hospital. “Our reanalysis showed that because of the statistical assumptions and methodology used in the original study, random phenomena could be misinterpreted as a ‘response’.”

In addition to identifying flaws in the statistical approach used in the original study, the Weill Cornell research team also reanalyzed the original data with methodologies that take into account the presence of contamination of EEG data by muscle activity artifact, and the kind of randomness that EEG signals manifest over time. “But critically, the data from the vegetative subjects showed no changes indicative of consciousness or command following. Our analysis only revealed random fluctuations of brain activity,” says Dr. Goldfine, who is also an assistant professor of neuroscience in the Brain and Mind Research Institute at Weill Cornell.

“This reanalysis study shows methods have consequences,” says Dr. Fins. “This is really difficult science, and we must do everything in our power to work together, to share our data and methods and peer review it, so that we can reach our goal of properly defining consciousness in severely brain injured patients.”

The study’s other co-authors include: Jonathan Bardin, a neuroscience graduate student at Weill Cornell Graduate School of Medical Sciences, and Dr. Quentin Noirhomme of the Coma Science Group, Cyclotron Research Centre and Neurology Department at the University and University Hospital of Liège, in Liège, Belgium.