Summary: A new study explores which of the two main patterns of brain activity may be seen during the onset of an epileptic seizure.

Findings suggest why some onset patterns are associated with better surgery outcomes.

At the onset of an epileptic seizure, differing characteristics of brain tissue surrounding the seizure’s origin site may determine which of two main patterns of brain activity will be seen, according to a study in PLOS Computational Biology.

Electrical activity in the brain at the start of an epileptic seizure typically follows either a “low amplitude fast” pattern or a “high amplitude slow” pattern. Patients whose seizures follow the high amplitude slow pattern have a higher risk of continuing seizures after surgical treatment. However, the mechanisms underlying these different onset patterns are unclear.

To better understand the onset patterns, Yujiang Wang of Newcastle University, U.K., and colleagues used a previously developed computer model that can simulate brain activity at the start of a seizure. The model output suggested that the onset pattern of a seizure may be determined not by brain tissue at the site where the seizure originates, but by characteristics of the surrounding “healthy” brain tissue.

The simulation showed that the high amplitude slow pattern occurs when surrounding brain tissue has higher excitability; that is, the brain cells have a stronger response to stimulation and can react immediately to the initiation of a seizure. Meanwhile, the low amplitude fast pattern is associated with tissue of lower excitability, which is only slowly penetrated by seizure activity. 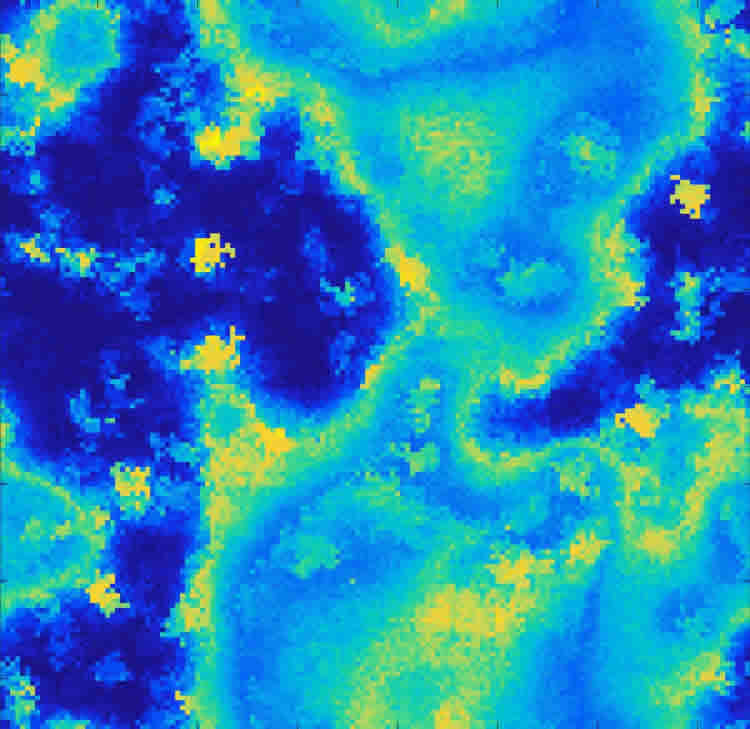 This is a simulated seizure activity on cortical tissue. NeuroscienceNews.com image is credited to Y. Wang.

These findings suggest why the different onset patterns are associated with different treatment outcomes. Surgical removal of seizure-triggering brain tissue may be enough to prevent seizure activity in nearby low-excitability tissue. However, high-excitability tissue may still be stimulated by alternative trigger sites after surgery, providing a possible explanation for the worse outcomes experienced by patients whose seizures follow the high amplitude slow pattern.

Next, the researchers plan to study seizure onset patterns in greater detail. “We hope to contribute towards the overall goal of associating patterns seen in seizures with an understanding of the underlying mechanism,” Wang says. “This would not only help our understanding of seizures in general, but may be useful for patient stratification in terms of treatment options.”

Competing Interests: The authors have declared that no competing interests exist.

Focal seizures are episodes of pathological brain activity that appear to arise from a localised area of the brain. The onset patterns of focal seizure activity have been studied intensively, and they have largely been distinguished into two types—low amplitude fast oscillations (LAF), or high amplitude spikes (HAS). Here we explore whether these two patterns arise from fundamentally different mechanisms. Here, we use a previously established computational model of neocortical tissue, and validate it as an adequate model using clinical recordings of focal seizures. We then reproduce the two onset patterns in their most defining properties and investigate the possible mechanisms underlying the different focal seizure onset patterns in the model. We show that the two patterns are associated with different mechanisms at the spatial scale of a single ECoG electrode. The LAF onset is initiated by independent patches of localised activity, which slowly invade the surrounding tissue and coalesce over time. In contrast, the HAS onset is a global, systemic transition to a coexisting seizure state triggered by a local event. We find that such a global transition is enabled by an increase in the excitability of the “healthy” surrounding tissue, which by itself does not generate seizures, but can support seizure activity when incited. In our simulations, the difference in surrounding tissue excitability also offers a simple explanation of the clinically reported difference in surgical outcomes. Finally, we demonstrate in the model how changes in tissue excitability could be elucidated, in principle, using active stimulation. Taken together, our modelling results suggest that the excitability of the tissue surrounding the seizure core may play a determining role in the seizure onset pattern, as well as in the surgical outcome.