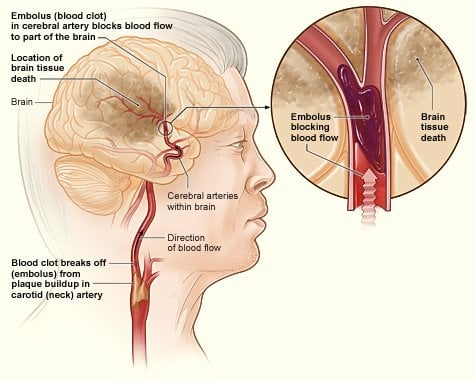 Researchers measured the cranial blood flow in 18 ECMO patients at three stages, first within the patient's first 24 hours on the machine, once again each day during treatment and finally when the therapy ended. The illustration shows how an ischemic stroke can occur in the brain and is credited to NHLBI/NIH.
Home
Featured

Measuring blood flow in the brain may be an easy, noninvasive way to predict stroke or hemorrhage in children receiving cardiac or respiratory support through a technique called ECMO, according to a new study by researchers at Nationwide Children’s Hospital. Early detection would allow physicians to alter treatment and take steps to prevent these complications—the leading cause of death for patients on ECMO.

Short for extracorporeal membrane oxygenation, ECMO is used when a patient is unable to sustain enough oxygen in the blood supply due to heart failure, septic shock, or other life-threatening condition, said Nicole O’Brien, MD, a physician and scientist in critical care medicine at Nationwide Children’s and lead author of the study, which appears in a recent issue of the journal Pediatric Critical Care Medicine. The patient is connected to ECMO with tubes that carry the patient’s blood from a vein through the machine, where it is oxygenated and funneled back to the patient via an artery or vein that then distributes the oxygen-rich blood to vital organs and tissues.

The disease processes that lead someone to need ECMO are different, O’Brien noted, but it is used only after traditional therapies, such as a ventilator, fail. One of the biggest risks of ECMO is bleeding in the brain. Only 36 percent of children who suffer this complication survive, many left with permanent neurologic injury.

“Most of these patients are critically ill before they go on ECMO and often have low oxygen levels, low blood pressure and poor heart function, all of which can certainly lead to strokes,” said O’Brien, also an associate professor of clinical medicine at The Ohio State University College of Medicine. “Still, some patients develop problems and others don’t and we don’t understand why.”

To better understand the cause for these brain bleeds, O’Brien launched a pilot study to monitor cerebral blood flow using a transcranial doplar ultrasound machine, a portable, noninvasive technology that uses sound waves to measure the amount and speed of blood flowing through the brain. All patients on ECMO experience a change in cranial blood flow, but O’Brien wanted to see if those variations offered any hint as to why some patients had complications while others didn’t.

She measured cranial blood flow in 18 ECMO patients, taking the first reading within the patient’s first 24 hours on the machine, then again each day they received the treatment and one more time after ECMO therapy ended.

The age of the child, length of time on ECMO or the underlying illness didn’t seem to matter. The only difference was that cerebral blood flow was dramatically increased in patients who ultimately had problems. While O’Brien found that interesting, the most intriguing finding was that the increase in blood flow occurred as long as two to six days before the patient began bleeding in the brain.

“That could give us a lot of lead time to prevent the brain bleeds or hemorrhages,” said O’Brien.

Physicians may decide to try to wean a patient off ECMO a little more quickly or change the dosage of anti-coagulant medication that all ECMO patients take.

Insights on the Link Between Chronic Stress and Alzheimer’s Disease

Although O’Brien is excited about the results, she is careful to note that the findings are preliminary. She is planning a multi-center trial to see if the outcome will be the same in a larger study population.

“We still need to understand why these kids bleed and why they stroke,” said O’Brien. “This little piece of information is the very tip of the iceberg in terms of why that happens.”

Take the Stress Out of Christmas by Being Kind to Yourself