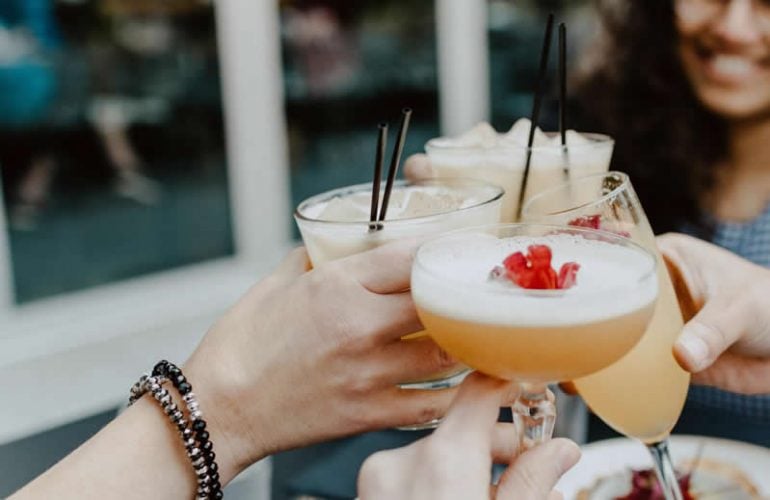 Summary: One in three women between the ages of 18 and 24 report saving their calories for binge drinking episodes. Researchers say the behavior can contribute to what they call “drunkorexia,” characterized by disordered patterns of eating to offset the negative effects of excess alcohol consumption, such as weight gain.

Mojito, appletini or a simple glass of fizz – they may take the edge off a busy day, but if you find yourself bingeing on more than a few, you could be putting your physical and mental health at risk according to new research at the University of South Australia.

Examining the drinking patterns of 479 female Australian university students aged 18-24 years, the world-first empirical study explored the underlying belief patterns that can contribute to Drunkorexia – a damaging and dangerous behaviour where disordered patterns of eating are used to offset negative effects of consuming excess alcohol, such as gaining weight.

Concerningly, researchers found that a staggering 82.7 percent of female university students surveyed had engaged in Drunkorexic behaviours over the past three months. And, more than 28 percent were regularly and purposely skipping meals, consuming low-calorie or sugar-free alcoholic beverages, purging or exercising after drinking to help reduce ingested calories from alcohol, at least 25 percent of the time.

“Due to their age and stage of development, young adults are more likely to engage in risk-taking behaviours, which can include drinking excess alcohol,” Powell-Jones says.

“Certainly, many of us have drunk too much alcohol at some point in time, and we know just by how we feel the next day, that this is not good for us, but when nearly a third of young female uni students are intentionally cutting back on food purely to offset alcohol calories; it’s a serious health concern.”

The harmful use of alcohol is a global issue, with excess consumption causing millions of deaths, including many thousands of young lives.

In Australia, one in six people consume alcohol at dangerous levels, placing them at lifetime risk of an alcohol-related disease or injury. The combination of excessive alcohol intake with restrictive eating behaviours to offset calories can result in a highly toxic cocktail for this population.

The study was undertaken in two stages. The first measured the prevalence of self-reported, compensative and restrictive activities in relation to their alcohol consumption.

The second stage identified participants’ Early Maladaptive Schemes (EMS) – or thought patterns – finding that that the subset of schemas most predictive of Drunkorexia were ‘insufficient self-control’, ’emotional deprivation’ and ‘social isolation’.

These are deeply held and pervasive themes regarding oneself and one’s relationship with others, that can develop in childhood and then can influence all areas of life, often in dysfunctional ways. Early maladaptive schemas can also be influenced by cultural and social norms.

“This study has provided preliminary insight into better understanding why young female adults make these decisions to engage in Drunkorexic behaviours,” Powell-Jones says.

“Not only may it be a coping strategy to manage social anxieties through becoming accepted and fitting in with peer group or cultural expectations, but it also shows a reliance on avoidant coping strategies.”

“It is important that clinicians, educators, parents and friends are aware of the factors that motivate young women to engage in this harmful and dangerous behaviour, including cultural norms, beliefs that drive self-worth, a sense of belonging, and interpersonal connectedness.

“By being connected, researchers and clinicians can develop appropriate clinical interventions and support for vulnerable young people within the youth mental health sector.”

Drunkorexia: An investigation of symptomatology and early maladaptive schemas within a female, young adult Australian population

Objective
Drunkorexia is a trend on the rise within the young adult population with significant physical, psychological, and social health implications. Many studies have investigated the link between Early Maladaptive Schemas (EMS) and both eating disorders and substance misuse. To date, no studies have specifically focused on EMS amongst those with Drunkorexia behaviours. The main objectives of this study were to further investigate the prevalence of Drunkorexia behaviour amongst Australian young adult females, and to elucidate the pattern of EMS and behaviours associated with Drunkorexia amongst young adult female Australian students.

Results
In excess of 28% participants reported engaging in characteristic Drunkorexic behaviours to specifically offset ingested alcohol calories while not engaging in such behaviours routinely for any other reason or with any other type of food or drink. The EMS most predictive of Drunkorexia‐type behaviour were Insufficient Self‐Control, Emotional Deprivation, and Social Isolation. EMS significantly contributed to the variance in Drunkorexia‐type behaviours, over and above that explained by eating disorder and binge drinking symptomatology.

Conclusions
Increasing numbers of individuals are endorsing symptoms of Drunkorexia‐type behaviour, increasing the risk of potential physical, psychological, and social health‐related problems. Addressing key EMS that may be associated with Drunkorexia‐type behaviours may strengthen future preventative and intervention programs. Given the exploratory nature of this research, further studies are required to clarify the relationship between EMS and Drunkorexia.

Gut Fungi Are Not Associated With Parkinson’s Disease