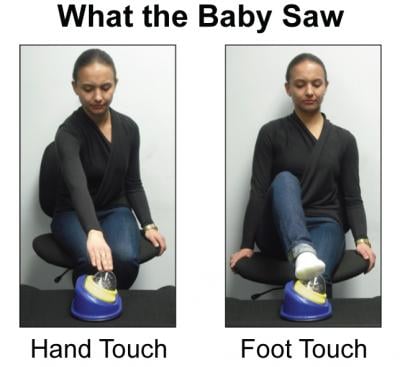 These photographs show the experimental setup for the Observe-Hand and Observe-Foot groups. Credited to Saby JN, Meltzoff AN, Marshall PJ/PLOS ONE
Home
Featured

Baby Brains are Tuned to the Specific Actions of Others

Infant brains are surprisingly sensitive to other people’s movements, according to new research published October 30th in the open-access journal PLOS ONE, by Joni Saby and colleagues at Temple University and the University of Washington.

When adults see other humans making movements with specific body parts, the parts of their brains devoted to moving those body parts also become activated. While watching someone moving their hand, the part of your cortex devoted to moving your own hand also becomes active. There are various developmental and evolutionary theories as to why this might be the case, one of which being that it might be a neurobiological foundation of our ability to imitate others, which is necessary for cultural learning and language development. Until now, however, this phenomenon has only been observed in adults, and researchers chose to investigate whether the infant brain also shows this sensitivity.

This provides evidence that infant brains are tuned to the mere observation of other people’s actions, which offers new clues toward our understanding of imitation and cultural learning. Co-author Andrew Meltzoff expands, “The neural system of babies directly connects them to other people, which jumpstarts imitation and social-emotional connectedness and bonding. Babies look at you and see themselves.”

Notes about this developmental neuroscience research

Financial Disclosure: This work was funded by an NIH (HD-68734) award to PJM and NSF (SMA-0835854) award to ANM. The funders had no role in study design, data collection and analysis, decision to publish, or preparation of the manuscript.

Competing Interest Statement: The authors have declared that no competing interests exist.