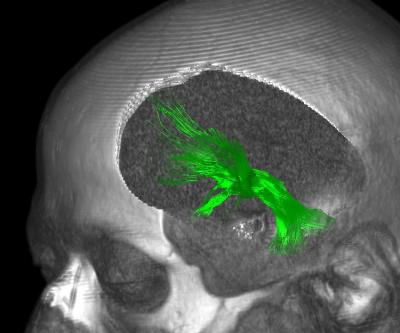 For the first time, physicians from the Bonn University Hospital have stimulated patients’ medial forebrain bundles.

Researchers from the Bonn University Hospital implanted pacemaker electrodes into the medial forebrain bundle of patients suffering from major depression with amazing results: In six out of seven patients, symptoms improved both considerably and rapidly. The method of deep brain stimulation had already been tested on various structures within the brain, but with clearly lesser effect. The results of this new study have now been published in the international journal, Biological Psychiatry.

After months of deep sadness, a first smile appears on a patient’s face. For many years, she had suffered from major depression and tried to end her life several times. She had spent the past years mostly in a passive state on her couch. Even watching TV was too much effort for her. Now, this young woman has found her joie de vivre (~joy of living) again; enjoying laughing and travelling. She, and an additional six patients with treatment resistant depression, participated in a study involving a novel method for addressing major depression at the Bonn University Hospital.

Considerable amelioration of depression within days

Prof. Dr. Volker Arnd Coenen, neurosurgeon at the Department of Neurosurgery (Klinik und Poliklinik für Neurochirurgie), implanted electrodes into the medial forebrain bundles in the brains of subjects suffering from major depression with the electrodes being connected to a brain pacemaker. The nerve cells were then stimulated by means of a weak electrical current, a method called deep brain stimulation. In a matter of days, in six out of seven patients, symptoms such as anxiety, despondence, listlessness and joylessness had improved considerably. “Such sensational success both in terms of the strength of the effects, as well as the speed of the response has so far not been achieved with any other method,” says Prof. Dr. Thomas E. Schläpfer from the Bonn University Hospital Department of Psychiatry and Psychotherapy.

Central part of the reward circuit

The medial forebrain bundle is a bundle of nerve fibers running from the deep-seated limbic system to the prefrontal cortex. In a certain place, the bundle is particularly narrow because the individual nerve fibers lie close together. “This is exactly the location in which we can have maximum effect using a minimum of current,” explains Prof. Coenen, who is now the new head of the Freiburg University Hospital’s Department of Stereotactic and Functional Neurosurgery (Abteilung Stereotaktische und Funktionelle Neurochirurgie am Universitätsklinikum Freiburg). The medial forebrain bundle is a central part of a euphoria circuit belonging to the brain’s reward system. What kind of effect stimulation exactly has on nerve cells is not yet known. But it obviously changes metabolic activity in the different brain centers.

Success clearly increased over that of earlier studies

The researchers have already shown in several studies that deep brain stimulation shows an amazing and – given the severity of the symptoms – unexpected degree of amelioration of symptoms in major depression. In those studies, however, the physicians had not implanted the electrodes into the medial forebrain bundle but instead into the nucleus accumbens, another part of the brain’s reward system. This had resulted in clear and sustainable improvements in about 50 percent of subjects. “But in this new study, our results were even much better,” says Prof. Schläpfer. A clear improvement in complaints was found in 85 percent of patients, instead of the earlier 50 percent. In addition, stimulation was performed with lower current levels, and the effects showed within a few days, instead of after weeks.

“Obviously, we have now come closer to a critical structure within the brain that is responsible for major depression,” says the psychiatrist from the Bonn University Hospital. Another cause for optimism among the group of physicians is that, since the study’s completion, an eighth patient has also been treated successfully. The patients have been observed for a period of up to 18 month after the intervention. Prof. Schläpfer reports, “The anti-depressive effect of deep brain stimulation within the medial forebrain bundle has not decreased during this period.” This clearly indicates that the effects are not temporary. This method gives those who suffer from major depression reason to hope. However, it will take quite a bit of time for the new procedure to become part of standard therapy.