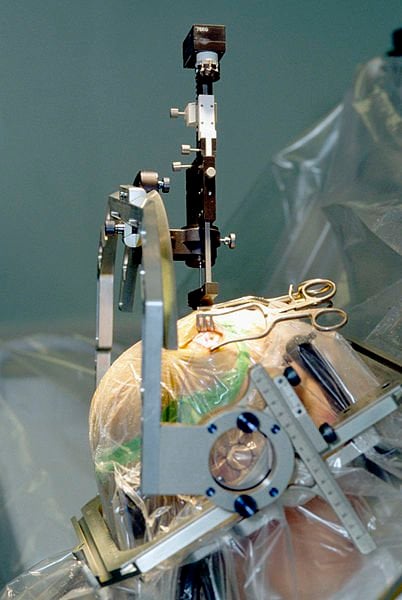 Surgery has been used for Parkinson’s disease and familial tremors, and also shows promise for other disorders.

The surgeon who more than two decades ago pioneered deep brain stimulation surgery in the United States to treat people with Parkinson’s disease and other movement disorders has now developed a new way to perform the surgery — which allows for more accurate placement of the brain electrodes and likely is safer for patients.

The success and safety of the new surgical technique could have broad implications for deep brain stimulation, or DBS, surgery into the future, as it may increasingly be used to help with a wide range of medical issues beyond Parkinson’s disease and familial tremors.

The new surgery also offers another distinct advantage: patients are asleep during the surgery, rather than being awake under local anesthesia to help surgeons determine placement of the electrodes as happens with the traditional DBS surgery.

A study detailing the new surgical technique is being published in the June 2013 edition of the Journal of Neurosurgery, and has been published online at the journal’s website.

“I think this will be how DBS surgery will be done in most cases going forward,” said Kim Burchiel, M.D., F.A.C.S., chair of neurological surgery at Oregon Health & Science University and the lead author of the Journal of Neurosurgery article. “This surgery allows for extremely accurate placement of the electrodes and it’s safer. Plus patients don’t need to be awake during this surgery — which will mean many more patients who can be helped by this surgery will now be willing to consider it.”

DBS surgery was first developed in France in 1987. Burchiel was the first surgeon in North America to perform the surgery, as part of a Food and Drug Administration-approved clinical trial in 1991.

The surgery involves implanting very thin wire electrodes in the brain, connected to something like a pacemaker implanted in the chest. The system then stimulates the brain to often significantly reduce the tremors.

For most of the last two decades, the DBS patient was required to be awake during surgery, to allow surgeons to determine through monitoring the patient’s symptoms and getting other conscious patient feedback whether the electrodes were placed in the right spots in the brain.

But the traditional form of the surgery had drawbacks. Many patients who might have benefitted weren’t willing to undergo the sometimes 4 to 6 hour surgery while awake. There also is a small chance of hemorrhaging in the brain as the surgeon places or moves the electrodes to the right spot in the brain.

The new technique uses advances in brain imaging in recent years to place the electrodes more safely, and more accurately, than in traditional DBS surgery. The surgical team uses CT scanning during the surgery itself, along with an MRI of the patient’s brain before the surgery, to precisely place the electrodes in the brain, while better ensuring no hemorrhaging or complications from the insertion of the electrode.

The Journal of Neurosurgery article reported on 60 patients who had the surgery at OHSU over an 18-month period beginning in early 2011.

“What our results say is that it’s safe, that we had no hemorrhaging or complications at all — and the accuracy of the electrode placement is the best ever reported,” Burchiel said.

Burchiel and his team have done another 140 or so surgeries with the new procedure since enrollment in the study ended. OHSU was the first center to pioneer the new DBS procedure, but other surgical teams across the U.S. are learning the technique at OHSU, and bringing it back to their own centers.

New Evidence for an Autoimmune Cause of Schizophrenia

The positive results with the new DBS technique could have ramifications as medical researchers nationwide continue to explore possible new uses for DBS surgery. DBS surgery has shown promising results in clinical trials with some Alzheimer’s patients, with some forms of depression and even with obesity.

If the early promising results for these conditions are confirmed, the number of people who might be candidates for DBS surgery could expand greatly, Burchiel said.

The length of the new surgery for the 60 patients involved in the study was slightly longer than traditional DBS surgery. But as Burchiel and his team have developed the new surgical technique, the new DBS surgeries are usually much shorter, often taking half the time of the more traditional approach. Given that, and that the electrodes are placed more accurately and the surgery is cheaper to perform, the new DBS surgery likely will be the technique most surgeons will use in coming years, Burchiel said.

DBS surgery often helps significantly reduce tremors in patients with familial tremor and tremors and other symptoms in Parkinson’s disease. A parallel study is ongoing at OHSU to assess how symptoms of the patients have improved since their DBS surgery using this new method.