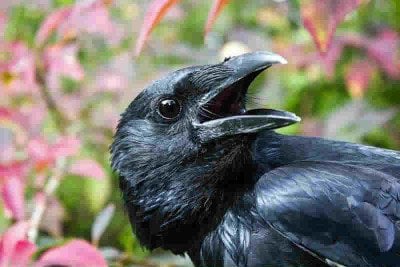 By observing the neural activity, the researchers were often able to predict which rule the crow was following even before it made its choice. Credited to Felix Moll, Institute for Neurobiology/University of Tübingen.
Home
Featured

Eat Crow If You Think I’m A Bird-Brain

Scientists have long suspected that corvids – the family of birds including ravens, crows and magpies – are highly intelligent. Now, Tübingen neurobiologists Lena Veit und Professor Andreas Nieder have demonstrated how the brains of crows produce intelligent behavior when the birds have to make strategic decisions. Their results are published in the latest edition of Nature Communications.

Crows are no bird-brains. Behavioral biologists have even called them “feathered primates” because the birds make and use tools, are able to remember large numbers of feeding sites, and plan their social behavior according to what other members of their group do. This high level of intelligence might seem surprising because birds’ brains are constructed in a fundamentally different way from those of mammals, including primates – which are usually used to investigate these behaviors.

The Tübingen researchers are the first to investigate the brain physiology of crows’ intelligent behavior. They trained crows to carry out memory tests on a computer. The crows were shown an image and had to remember it. Shortly afterwards, they had to select one of two test images on a touchscreen with their beaks based on a switching behavioral rules. One of the test images was identical to the first image, the other different. Sometimes the rule of the game was to select the same image, and sometimes it was to select the different one. The crows were able to carry out both tasks and to switch between them as appropriate. That demonstrates a high level of concentration and mental flexibility which few animal species can manage – and which is an effort even for humans.

The crows were quickly able to carry out these tasks even when given new sets of images. The researchers observed neuronal activity in the nidopallium caudolaterale, a brain region associated with the highest levels of cognition in birds. One group of nerve cells responded exclusively when the crows had to choose the same image – while another group of cells always responded when they were operating on the “different image” rule. By observing this cell activity, the researchers were often able to predict which rule the crow was following even before it made its choice.

The study published in Nature Communications provides valuable insights into the parallel evolution of intelligent behavior. “Many functions are realized differently in birds because a long evolutionary history separates us from these direct descendants of the dinosaurs,” says Lena Veit. “This means that bird brains can show us an alternative solution out of how intelligent behavior is produced with a different anatomy.” Crows and primates have different brains, but the cells regulating decision-making are very similar. They represent a general principle which has re-emerged throughout the history of evolution. “Just as we can draw valid conclusions on aerodynamics from a comparison of the very differently constructed wings of birds and bats, here we are able to draw conclusions about how the brain works by investigating the functional similarities and differences of the relevant brain areas in avian and mammalian brains,” says Professor Andreas Nieder.