While researchers will not be able to calculate the exact number of community cases of coronavirus by examining wastewater, they can trace the increase of SARS-CoV-2 concentration and track the level of infection rate. 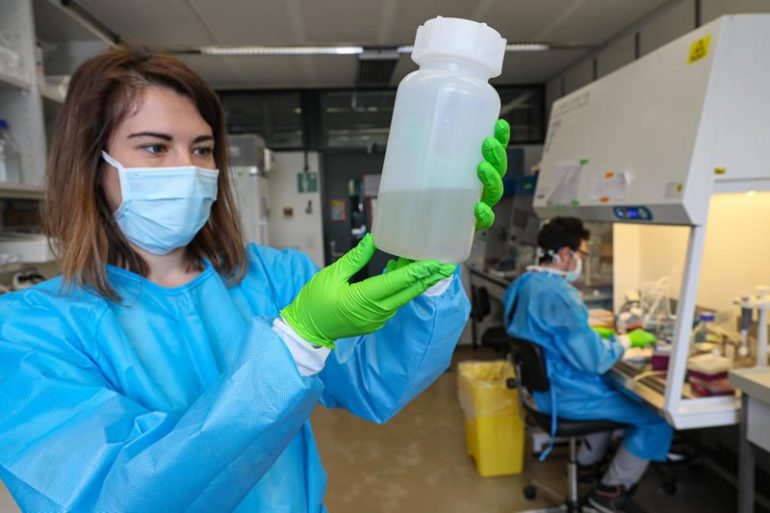 Summary: Examining wastewater is helping researchers track coronavirus infection trends. The waste reflects the viral load excreted by a population within a few hours and can help establish COVID-19 community hot spots. While researchers will not be able to calculate the exact number of community cases of coronavirus by examining wastewater, they can trace the increase of SARS-CoV-2 concentration and track the level of infection rate.

Scientists around the world are studying the novel coronavirus (SARS-CoV-2) from many different perspectives in an effort to better understand how it infects the body and spreads from person to person. The goal is to find therapies for neutralizing and eliminating it. One approach being taken by researchers at EPFL and Eawag—until drug treatments and a vaccine are developed—is to analyze wastewater samples so that health officials can detect the virus before the disease is diagnosed clinically. “Our study looks at how we can detect the virus in wastewater and measure its concentration before people start developing clinical symptoms—and to determine how much time before,” says Tamar Kohn, head of EPFL’s Environmental Chemistry Laboratory (LCE).

In collaboration with Christoph Ort at Eawag’s Urban Water Management Department and Tim Julian at Eawag’s Environmental Microbiology Department, the researchers pulled off a major feat in showing that the novel coronavirus can be detected and measured in wastewater in a matter of weeks. The researchers analyzed samples from Lausanne, Zurich and Lugano—including samples from Zurich and Lugano that were collected in late February when the first cases were recorded in Switzerland. “As a specialist in environmental virology, I was ready to work on the pandemic when it first arrived in Italy,” says Xavier Fernandez Cassi at the LCE. “It was clear to me that the virus would spread to Switzerland. Given how interlinked countries are today, I would’ve been surprised if it didn’t.”

The researchers found traces of the virus in all the samples they collected. While concentrations in the more recent samples were so high that it was fairly easy to measure them, this was not true for the samples from February. “We were pleasantly surprised to find a signal in wastewater from Lugano—where only one case had been identified at that point—and from Zurich, where only six had been identified,” says Kohn. Working with colleagues at Eawag, they collected samples from nine wastewater treatment plants in Ticino, two in Zurich and one in Lausanne, corresponding to a total of around 800,000 city residents.

The potential ramifications of this study are so important that Cassi and Marie-Hélène Corre, another LCE biologist, received special authorization to work at their EPFL lab during the lockdown. They were particularly efficient in conducting their experiments since almost nobody else was using the testing equipment, as the campus was nearly deserted. But the researchers had to be extra careful because the novel coronavirus—even though it comes from a known viral family—is nevertheless a zoonotic virus. “The main characteristic of this virus is that it has envelope—its viral capsid is enveloped in a biological membrane,” says Corre. “The seasonal flu virus and HIV also have envelopes.”

The samples collected since the first cases of COVID-19 were reported in Switzerland are valuable archives. However, the main goal of this study is not to retrace the past but to develop an early warning system. Ort says: “With samples from 20 large treatment plants distributed across Switzerland, we could monitor wastewater from around 2.5 million people.” If the samples are analyzed rapidly, we could probably detect a resurgence of infections earlier than with diagnostic tests—about a week earlier—especially during the period when the lockdown is being lifted. Ort has long been concerned with wastewater-based epidemiology, previously focusing on comparisons of drug use across Europe. “Wastewater doesn’t lie—it reflects what has been excreted by a population within a few hours,” he says. The research team has drawn on their established contacts with local government agencies and wastewater treatment plants.

Since the researchers were able to successfully detect low viral concentrations at the early stage of the COVID-19 outbreak in Switzerland, they should be able to reconstruct the infection curve. But it will still take a few weeks to analyze the over 300 samples currently in frozen storage at Eawag and EPFL. They won’t be able to calculate the exact number of infections using these data, since there is too much variation in how much of the virus each patient sheds. What will be important to track, however, is the trend. For example, using samples collected in Lausanne in March and April, the researchers were able to roughly trace the increase in the wastewater concentration of SARS-CoV-2. Kohn estimates that the concentration rose by a factor of between ten and a hundred.

Despite the researchers’ initial success, they still need to further improve their method. For example, they don’t yet know what percentage of the wastewater’s viral load is captured when the RNA is extracted after a number of other steps (filtration and centrifugation). There is also much uncertainty in the subsequent selective amplification process for the target sequence. Only when the amount of uncertainty is reduced will they be able to draw robust conclusions about viral concentrations in the original samples.

Coronavirus unlikely to spread via water or wastewater

While genetic material from the novel coronavirus can be detected in wastewater, there is no evidence at present to suggest that the pathogen spreads via water or wastewater. Drinking water in Switzerland is of excellent microbiological quality and remains fit for consumption even during the pandemic.