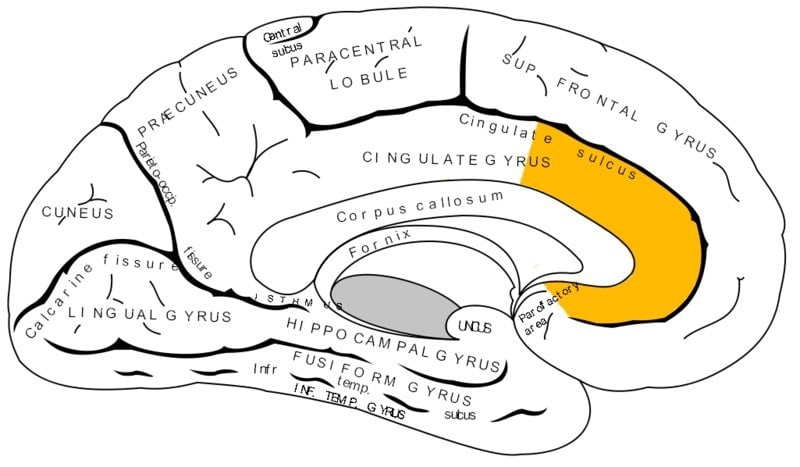 Researchers discovered measurable regional and global brain atrophy in patients with MTBI one year after their concussion. The anterior cingulate and precuneal regions showed significant decreases in the volume of regional white and gray matter. The image highlights the anterior cingulate.
Home
Featured

A single concussion may cause lasting structural damage to the brain, according to a new study published online in the journal Radiology.

“This is the first study that shows brain areas undergo measureable volume loss after concussion,” said Yvonne W. Lui, M.D., Neuroradiology section chief and assistant professor of radiology at NYU Langone School of Medicine. “In some patients, there are structural changes to the brain after a single concussive episode.”

Following a concussion, some patients experience a brief loss of consciousness. Other symptoms include headache, dizziness, memory loss, attention deficit, depression and anxiety. Some of these conditions may persist for months or even years.

Studies show that 10 to 20 percent of MTBI patients continue to experience neurological and psychological symptoms more than one year following trauma. Brain atrophy has long been known to occur after moderate and severe head trauma, but less is known about the lasting effects of a single concussion.

Dr. Lui and colleagues set out to investigate changes in global and regional brain volume in patients one year after MTBI. Twenty-eight MTBI patients (with 19 followed at one year) with post-traumatic symptoms after injury and 22 matched controls (with 12 followed at one year) were enrolled in the study. The researchers used three-dimensional magnetic resonance imaging (MRI) to determine regional gray matter and white matter volumes and correlated these findings with other clinical and cognitive measurements.

The researchers found that at one year after concussion, there was measurable global and regional brain atrophy in the MTBI patients. These findings show that brain atrophy is not exclusive to more severe brain injuries but can occur after a single concussion.

“This study confirms what we have long suspected,” Dr. Lui said. “After MTBI, there is true structural injury to the brain, even though we don’t see much on routine clinical imaging. This means that patients who are symptomatic in the long-term after a concussion may have a biologic underpinning of their symptoms.”

Certain brain regions showed a significant decrease in regional volume in patients with MTBI over the first year after injury, compared to controls. These volume changes correlated with cognitive changes in memory, attention and anxiety.

“Two of the brain regions affected were the anterior cingulate and the precuneal region,” Dr. Lui said. “The anterior cingulate has been implicated in mood disorders including depression, and the precuneal region has a lot of different connections to areas of the brain responsible for executive function or higher order thinking.”

Does Better Autobiographical Memory Enhance the Propensity for Creative Thinking?

According to Dr. Lui, researchers are still investigating the long-term effects of concussion, and she advises caution in generalizing the results of this study to any particular individual.

“It is important for patients who have had a concussion to be evaluated by a physician,” she said. “If patients continue to have symptoms after concussion, they should follow-up with their physician before engaging in high-risk activities such as contact sports.”

Notes about this concussion and brain damage research