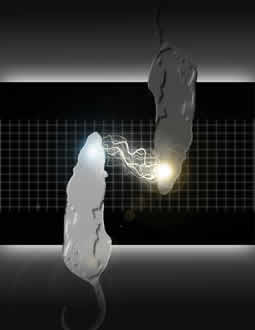 Researchers have electronically linked the brains of pairs of rats for the first time, enabling them to communicate directly to solve simple behavioral puzzles. A further test of this work successfully linked the brains of two animals thousands of miles apart—one in Durham, N.C., and one in Natal, Brazil.
Home
Electrophysiology

The results of these projects suggest the future potential for linking multiple brains to form what the research team is calling an “organic computer,” which could allow sharing of motor and sensory information among groups of animals. The study was published Feb. 28, 2013, in the journal Scientific Reports.

“Our previous studies with brain-machine interfaces had convinced us that the rat brain was much more plastic than we had previously thought,” said Miguel Nicolelis, M.D., PhD, lead author of the publication and professor of neurobiology at Duke University School of Medicine. “In those experiments, the rat brain was able to adapt easily to accept input from devices outside the body and even learn how to process invisible infrared light generated by an artificial sensor. So, the question we asked was, ‘if the brain could assimilate signals from artificial sensors, could it also assimilate information input from sensors from a different body?’”

To test this hypothesis, the researchers first trained pairs of rats to solve a simple problem: to press the correct lever when an indicator light above the lever switched on, which rewarded the rats with a sip of water. They next connected the two animals’ brains via arrays of microelectrodes inserted into the area of the cortex that processes motor information.

One of the two rodents was designated as the “encoder” animal. This animal received a visual cue that showed it which lever to press in exchange for a water reward. Once this “encoder” rat pressed the right lever, a sample of its brain activity that coded its behavioral decision was translated into a pattern of electrical stimulation that was delivered directly into the brain of the second rat, known as the “decoder” animal.

The decoder rat had the same types of levers in its chamber, but it did not receive any visual cue indicating which lever it should press to obtain a reward. Therefore, to press the correct lever and receive the reward it craved, the decoder rat would have to rely on the cue transmitted from the encoder via the brain-to-brain interface.

Importantly, the communication provided by this brain-to-brain interface was two-way. For instance, the encoder rat did not receive a full reward if the decoder rat made a wrong choice. The result of this peculiar contingency, said Nicolelis, led to the establishment of a “behavioral collaboration” between the pair of rats.

“We saw that when the decoder rat committed an error, the encoder basically changed both its brain function and behavior to make it easier for its partner to get it right,” Nicolelis said. “The encoder improved the signal-to-noise ratio of its brain activity that represented the decision, so the signal became cleaner and easier to detect. And it made a quicker, cleaner decision to choose the correct lever to press. Invariably, when the encoder made those adaptations, the decoder got the right decision more often, so they both got a better reward.”

In a second set of experiments, the researchers trained pairs of rats to distinguish between a narrow or wide opening using their whiskers. If the opening was narrow, they were taught to nose-poke a water port on the left side of the chamber to receive a reward; for a wide opening, they had to poke a port on the right side.

The researchers then divided the rats into encoders and decoders. The decoders were trained to associate stimulation pulses with the left reward poke as the correct choice, and an absence of pulses with the right reward poke as correct. During trials in which the encoder detected the opening width and transmitted the choice to the decoder, the decoder had a success rate of about 65 percent, significantly above chance.

To test the transmission limits of the brain-to-brain communication, the researchers placed an encoder rat in Brazil, at the Edmond and Lily Safra International Institute of Neuroscience of Natal (ELS-IINN), and transmitted its brain signals over the Internet to a decoder rat in Durham, N.C. They found that the two rats could still work together on the tactile discrimination task.

“So, even though the animals were on different continents, with the resulting noisy transmission and signal delays, they could still communicate,” said Miguel Pais-Vieira, PhD, a postdoctoral fellow and first author of the study. “This tells us that it could be possible to create a workable, network of animal brains distributed in many different locations.”

Nicolelis added, “These experiments demonstrated the ability to establish a sophisticated, direct communication linkage between rat brains, and that the decoder brain is working as a pattern-recognition device. So basically, we are creating an organic computer that solves a puzzle.”

“But in this case, we are not inputting instructions, but rather only a signal that represents a decision made by the encoder, which is transmitted to the decoder’s brain which has to figure out how to solve the puzzle. So, we are creating a single central nervous system made up of two rat brains,” said Nicolelis. He pointed out that, in theory, such a system is not limited to a pair of brains, but instead could include a network of brains, or “brain-net.” Researchers at Duke and at the ELS-IINN are now working on experiments to link multiple animals cooperatively to solve more complex behavioral tasks.

“We cannot predict what kinds of emergent properties would appear when animals begin interacting as part of a brain-net. In theory, you could imagine that a combination of brains could provide solutions that individual brains cannot achieve by themselves,” continued Nicolelis. Such a connection might even mean that one animal would incorporate another’s sense of “self,” he said.

“In fact, our studies of the sensory cortex of the decoder rats in these experiments showed that the decoder’s brain began to represent in its tactile cortex not only its own whiskers, but the encoder rat’s whiskers, too. We detected cortical neurons that responded to both sets of whiskers, which means that the rat created a second representation of a second body on top of its own.” Basic studies of such adaptations could lead to a new field that Nicolelis calls the “neurophysiology of social interaction.”

Such complex experiments will be enabled by the laboratory’s ability to record brain signals from almost 2,000 brain cells at once. The researchers hope to record the electrical activity produced simultaneously by 10-30,000 cortical neurons in the next five years.

Such massive brain recordings will enable more precise control of motor neuroprostheses—such as those being developed by the Walk Again Project—to restore motor control to paralyzed people, Nicolelis said.

Notes about this brain-to-brain interface research

The Walk Again Project recently received a $20 million grant from FINEP, a Brazilian research funding agency, to allow the development of the first brain-controlled whole-body exoskeleton aimed at restoring mobility in severely paralyzed patients. A first demonstration of this technology is scheduled for the opening game of the 2014 Soccer World Cup in Brazil.

In addition to Nicolelis and Pais-Vieira, other co-authors of the Scientific Reports study were Mikhail Lebedev and Jing Wang of Duke, and Carolina Kunicki of the Edmond and Lily Safra International Institute for Neuroscience of Natal, in Natal, Brazil.