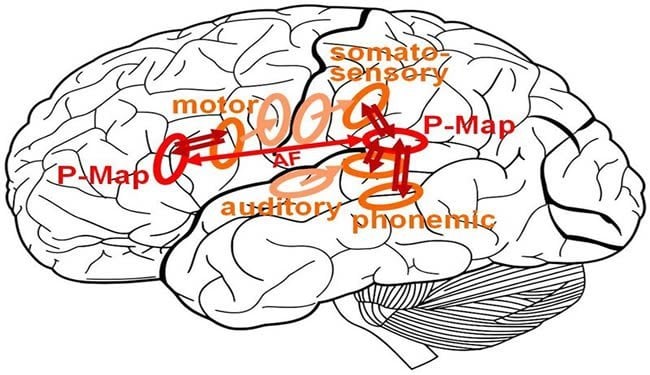 Scientists have long believed that human speech is processed towards the back of the brain’s cerebral cortex, behind auditory cortex where all sounds are received — a place famously known as Wernicke’s area after the German neurologist who proposed this site in the late 1800s based on his study of brain injuries and strokes.

But, now, research that analyzed more than 100 imaging studies concludes that Wernicke’s area is in the wrong location. The site newly identified is about 3 centimeters closer to the front of the brain and on the other side of auditory cortex — miles away in terms of brain architecture and function.

The finding, published online this week in the Early Edition of the Proceedings of the National Academy of Sciences (PNAS), means that “textbooks will now have to be rewritten,” says the study’s senior author, Josef Rauschecker, Ph.D., a professor in the department of neuroscience at Georgetown University Medical Center (GUMC).

“We gave old theories that have long hung – a knockout punch,” says Rauschecker, who is also a member of the Georgetown Institute for Cognitive and Computational Sciences.

“If you Google ‘language organization in the brain,’ probably every cartoon illustration out there is wrong,” says lead author Iain DeWitt, a Ph.D. candidate in Georgetown’s Interdisciplinary Program in Neuroscience.

The finding matters, Rauschecker says, because the new location of Wernicke’s area matches that recently found in non-human primates, suggesting the origins of language between monkeys and humans is closer than many have thought, he says.

“Scientists have long argued that speech is unique to humans. They say monkeys make communication sounds but the fact that they don’t have the same elaborate language that we do is due to different brain processing centers,” Rauschecker says. “This finding suggests the architecture and processing between the two species is more similar than many people thought.”

Knowing that Wernicke’s area is in the front of the auditory cortex could also provide clinical insights into patients suffering from brain damage, such as a stroke, or in disorders in speech comprehension. “If a patient can’t speak, or understand speech, we now have a good clue as to where damage has occurred,” he says.

Rauschecker and DeWitt searched the peer-reviewed, scientific literature for studies that investigated auditory speech perception in humans using different scanning methods — either from functional magnetic resonance imaging (fMRI) or positron emission tomography (PET). They found 115 brain imaging studies of speech perception, which in total had included over 1,900 participants and generated over 800 brain coordinates for speech processing. They then used a type of analysis that allowed them to measure the degree of agreement among brain coordinates from these studies.

The results pinpoint the location of Wernicke’s area to be in the left temporal lobe, and specifically to be in the superior temporal gyrus, in front of the the primary auditory cortex.

This is the area that Rauschecker had found to be activated in his own studies of speech processing. He and his colleagues defined a processing “stream” in speech perception that is hierarchical, and which moves increasingly to the front of the superior temporal gyrus. It starts with simple tones and sounds that are perceived by a group of neurons. The sounds then travel to a deeper level of neurons that process phonemes (distinct units of sound), then to neurons that process words.

“Other researchers have found what we have, as well, which has caused a lot of controversy in the field as to where Wernicke’s area really is,” Rauschecker says. “This study provides a definitive, irrefutable answer.”

DeWitt agrees. “After the 1990s, the first decade of cognitive brain imaging, it was already clear to some researchers that the anterior portion of the superior temporal gyrus was a more likely site for word recognition. The majority of imagers, however, were reluctant to overturn a century of prior understanding on account of what was then a relatively new methodology,” he says. “The point of our paper is to force a reconciliation between the data and theory. It is no longer tenable to overlook or dismiss evidence supporting a central role for the anterior portion of the superior temporal gyrus in auditory word recognition.”

The study was supported by National Science Foundation grants, and a National Institute on Deafness and Other Communications Disorders grant.