Summary: Scientists are beginning to understand the neuroscience behind sensory processing disorder and are developing new therapies to help those with SPD.

If you’ve ever lied about your IQ to seem more intelligent, it’s time to fess up. Scientists can now tell how smart you are just by looking at a scan of your brain.

Actually, to be more precise, the scientists themselves aren’t looking at your brain scan; a machine-learning algorithm they’ve developed is.

In a new study, researchers from Caltech, Cedars-Sinai Medical Center, and the University of Salerno show that their new computing tool can predict a person’s intelligence from functional magnetic resonance imaging (fMRI) scans of their resting state brain activity. Functional MRI develops a map of brain activity by detecting changes in blood flow to specific brain regions. In other words, an individual’s intelligence can be gleaned from patterns of activity in their brain when they’re not doing or thinking anything in particular—no math problems, no vocabulary quizzes, no puzzles.

“We found if we just have people lie in the scanner and do nothing while we measure the pattern of activity in their brain, we can use the data to predict their intelligence,” says Ralph Adolphs (PhD ’92), Bren Professor of Psychology, Neuroscience, and Biology, and director and Allen V. C. Davis and Lenabelle Davis Leadership Chair of the Caltech Brain Imaging Center.

To train their algorithm on the complex patterns of activity in the human brain, Adolphs and his team used data collected by the Human Connectome Project (HCP), a scientific endeavor funded by the National Institutes of Health (NIH) that seeks to improve understanding of the many connections in the human brain. Adolphs and his colleagues downloaded the brain scans and intelligence scores from almost 900 individuals who had participated in the HCP, fed these into their algorithm, and set it to work.

After processing the data, the team’s algorithm was able to predict intelligence at statistically significant levels across these 900 subjects, says Julien Dubois (PhD ’13), a postdoctoral fellow at Cedars-Sinai Medical Center. But there is a lot of room for improvement, he adds. The scans are coarse and noisy measures of what is actually happening in the brain, and a lot of potentially useful information is still being discarded.

“The information that we derive from the brain measurements can be used to account for about 20 percent of the variance in intelligence we observed in our subjects,” Dubois says. “We are doing very well, but we are still quite far from being able to match the results of hour-long intelligence tests, like the Wechsler Adult Intelligence Scale,”

Dubois also points out a sort of philosophical conundrum inherent in the work. “Since the algorithm is trained on intelligence scores to begin with, how do we know that the intelligence scores are correct?” The researchers addressed this issue by extracting a more precise estimate of intelligence across 10 different cognitive tasks that the subjects had taken, not only from an IQ test.

In predicting intelligence from brain scans, the algorithm is doing something that humans cannot, because even an experienced neuroscientist cannot look at a brain scan and tell how intelligent a person is.

“If trained properly, these algorithms can answer questions as complex as the one we are trying to answer here. They are very powerful, but if you actually ask, ‘How do they learn? How do they do these things?’ These are difficult questions to answer,” says co-author Paola Galdi, previously a PhD student at the University of Salerno and now a postdoctoral fellow at the University of Edinburgh.

The study was conducted as part of an ongoing quest to build a diagnostic tool that can tell a great deal about a person’s mind from their brain scans. Adolphs and his colleagues say that they would like to one day see MRIs work as well for diagnosing conditions like autism, schizophrenia, and anxiety as they currently do for finding tumors, aneurisms, or liver disease.

“Functional MRI has not yet delivered on its promise as a diagnostic tool. We, and many others, are actively working to change this,” says Dubois. “The availability of large data sets that can be mined by scientists around the world is making this possible.” 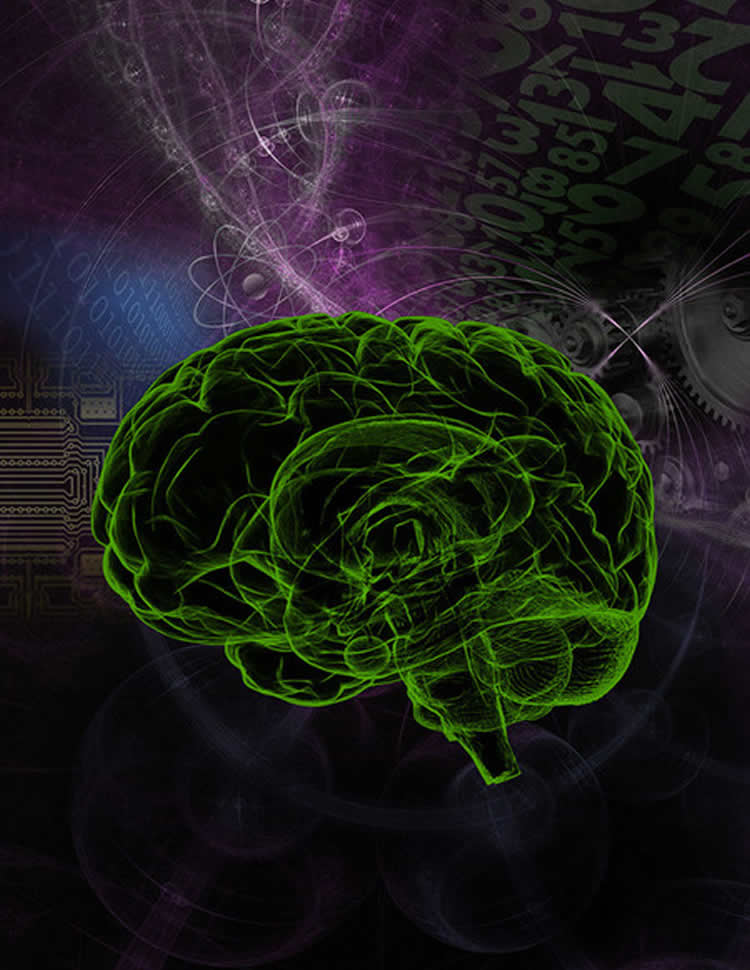 In predicting intelligence from brain scans, the algorithm is doing something that humans cannot, because even an experienced neuroscientist cannot look at a brain scan and tell how intelligent a person is. NeuroscienceNews.com image is adapted from the CalTech news release.

Intelligence was chosen as one of the first test beds for the technology because research has shown that it’s very stable over time. That is, a person’s IQ score will not vary much over a period of weeks, months, or years.

The researchers also conducted a parallel study, using the same test population and approach, that attempted to predict personality traits from fMRI brain scans. An individual’s personality, Adolphs says, is at least as stable as intelligence over a long period of time. The personality test they used divides personality into five scales:

However, it has turned out to be much more difficult to predict personality using the method the team used for predicting intelligence. But this is not surprising, says Dubois.

“The personality scores in the database are just from short, self-report questionnaires,” he says. “That’s not going to be a very accurate measure of personality to begin with, so it is no wonder we cannot predict it well from the MRI data.”

Adolphs and Dubois say they are now teaming up with colleagues from different fields, including Caltech philosophy professor Frederick Eberhardt, to follow up on their findings.

Funding: Funding for the studies was provided by the National Institute of Mental Health, the Tianqiao and Chrissy Chen Institute for Neuroscience at Caltech, the Carver Mead New Ventures Fund, and a grant from the Brain & Behavior Research Foundation.

Personality neuroscience aims to find associations between brain measures and personality traits. Findings to date have been severely limited by a number of factors, including small sample size and omission of out-of-sample prediction. We capitalized on the recent availability of a large database, together with the emergence of specific criteria for best practices in neuroimaging studies of individual differences. We analyzed resting-state functional magnetic resonance imaging data from 884 young healthy adults in the Human Connectome Project (HCP) database. We attempted to predict personality traits from the “Big Five”, as assessed with the NEO-FFI test, using individual functional connectivity matrices. After regressing out potential confounds (such as age, sex, handedness and fluid intelligence), we used a cross-validated framework, together with test-retest replication (across two sessions of resting-state fMRI for each subject), to quantify how well the neuroimaging data could predict each of the five personality factors. We tested three different (published) denoising strategies for the fMRI data, two inter-subject alignment and brain parcellation schemes, and three different linear models for prediction. As measurement noise is known to moderate statistical relationships, we performed final prediction analyses using average connectivity across both imaging sessions (1 h of data), with the analysis pipeline that yielded the highest predictability overall. Across all results (test/retest; 3 denoising strategies; 2 alignment schemes; 3 models), openness to experience emerged as the only reliably predicted personality factor. Using the full hour of resting-state data and the best pipeline, we could predict openness to experience (NEOFAC_O: r=0.24, R^2 =0.024) almost as well as we could predict the score on a 24-item intelligence test (PMAT24_A_CR: r=0.26, R^2 =0.044). Other factors (extraversion, neuroticism, agreeableness and conscientiousness) yielded weaker predictions across results that were not statistically significant under permutation testing. We also derived two superordinate personality factors (“α” and “β”) from a principal components analysis of the NEO-FFI factor scores, thereby reducing noise and enhancing the precision of these measures of personality. We could account for 5% of the variance in the β superordinate factor (r=0.27, R^2 =0.050), which loads highly on openness to experience. We conclude with a discussion of the potential for predicting personality from neuroimaging data and make specific recommendations for the field.

Individual people differ in their ability to reason, solve problems, think abstractly, plan and learn. A reliable measure of this general ability, also known as intelligence, can be derived from scores across a diverse set of cognitive tasks. There is great interest in understanding the neural underpinnings of individual differences in intelligence, since it is the single best predictor of long-term life success. The most replicated neural correlate of human intelligence to date is total brain volume; however, this coarse morphometric correlate says little about function. Here we ask whether measurements of the activity of the resting brain (resting-state fMRI) might also carry information about intelligence. We used the final release of the Young Adult Human Connectome Project (N=884 subjects after exclusions), providing a full hour of resting-state fMRI per subject; controlled for gender, age, and brain volume; and derived a reliable estimate of general intelligence from scores on multiple cognitive tasks. Using a cross-validated predictive framework, we predicted 20% of the variance in general intelligence in the sampled population from their resting-state connectivity matrices. Interestingly, no single anatomical structure or network was responsible or necessary for this prediction, which instead relied on redundant information distributed across the brain.