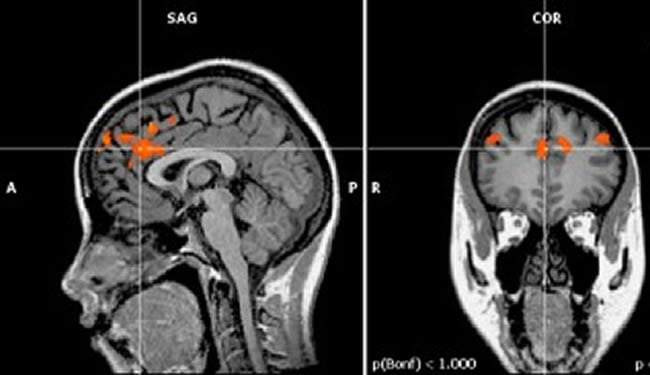 This is Your Brain on No Self-Control

MRI images show what the brain looks like when you do something you know you shouldn’t.

New pictures from the University of Iowa show what it looks like when a person runs out of patience and loses self-control.

A study by University of Iowa neuroscientist and neuromarketing expert William Hedgcock confirms previous studies that show self-control is a finite commodity that is depleted by use. Once the pool has dried up, we’re less likely to keep our cool the next time we’re faced with a situation that requires self-control.

But Hedgcock’s study is the first to actually show it happening in the brain using fMRI images that scan people as they perform self-control tasks. The images show the anterior cingulate cortex (ACC)—the part of the brain that recognizes a situation in which self-control is needed and says, “Heads up, there are multiple responses to this situation and some might not be good”—fires with equal intensity throughout the task.

However, the dorsolateral prefrontal cortex (DLPFC)—the part of the brain that manages self-control and says, “I really want to do the dumb thing, but I should overcome that impulse and do the smart thing”—fires with less intensity after prior exertion of self-control.

He said that loss of activity in the DLPFC might be the person’s self-control draining away. The stable activity in the ACC suggests people have no problem recognizing a temptation. Although they keep fighting, they have a harder and harder time not giving in.

Which would explain why someone who works very hard not to take seconds of lasagna at dinner winds up taking two pieces of cake at desert. The study could also modify previous thinking that considered self-control to be like a muscle. Hedgcock says his images seem to suggest that it’s like a pool that can be drained by use then replenished through time in a lower conflict environment, away from temptations that require its use.

The researchers gathered their images by placing subjects in an MRI scanner and then had them perform two self-control tasks—the first involved ignoring words that flashed on a computer screen, while the second involved choosing preferred options. The study found the subjects had a harder time exerting self-control on the second task, a phenomenon called “regulatory depletion.” Hedgcock says that the subjects’ DLPFCs were less active during the second self-control task, suggesting it was harder for the subjects to overcome their initial response.

Hedgcock says the study is an important step in trying to determine a clearer definition of self-control and to figure out why people do things they know aren’t good for them. One possible implication is crafting better programs to help people who are trying to break addictions to things like food, shopping, drugs, or alcohol. Some therapies now help people break addictions by focusing at the conflict recognition stage and encouraging the person to avoid situations where that conflict arises. For instance, an alcoholic should stay away from places where alcohol is served.

But Hedgcock says his study suggests new therapies might be designed by focusing on the implementation stage instead. For instance, he says dieters sometimes offer to pay a friend if they fail to implement control by eating too much food, or the wrong kind of food. That penalty adds a real consequence to their failure to implement control and increases their odds of choosing a healthier alternative.

The study might also help people who suffer from a loss of self-control due to birth defect or brain injury.

Gut Microbes May Lead to Therapies for Mental Illness

“If we know why people are losing self-control, it helps us design better interventions to help them maintain control,” says Hedgcock, an assistant professor in the Tippie College of Business marketing department and the UI Graduate College’s Interdisciplinary Graduate Program in Neuroscience.

Hedgcock’s paper, “Reducing self-control depletion effects through enhanced sensitivity to implementation: Evidence from fMRI and behavioral studies,” was co-authored by Kathleen Vohs and Akshay Rao of the University of Minnesota. It will be published in January 2013 in the Journal of Consumer Psychology.

Notes about this psychology and neuromarketing article

You are sure to have a lot to say about this press release. Feel free to let loose in the comments.