Structure of brain networks is not fixed

Summary: Brain networks are spatially and functionally fluid, and not static, as previously believed.

The shape and connectivity of brain networks — discrete areas of the brain that work together to perform complex cognitive tasks — can change in fundamental and recurring ways over time, according to a study led by Georgia State University.

The interaction and communication among neurons, known as “functionally connectivity,” gives rise to brain networks. Researchers have long assumed these networks are spatially static and a fixed set of brain regions contribute to each network. But in a new study published in Human Brain Mapping, Georgia State researchers find evidence that brain networks are spatially and functionally fluid.

The researchers collected functional magnetic resonance imaging (fMRI) brain imaging data to create snapshots of network activity at a granular level over the course of several minutes, and observed rapid changes in the function, size and location of the networks.

“Assuming each brain region is interacting with the rest of the brain in the same way over time is oversimplified,” said Armin Iraji, a research scientist in the Center for Translational Research in Neuroimaging and Data Science (TReNDS), and lead author of the study. The study’s co-authors include Vince Calhoun, Distinguished University Professor of Psychology and director of TReNDS, and Jessica Turner, associate professor of psychology.

Rather, a given brain network’s spatial properties change over time as does its relationship with other brain networks, the researchers found.

“You can think of the brain like an organization where employees work together to make the whole system run,” said Iraji. “For a long time, we thought brain networks were like departments or offices, where the same people were doing the same job every day. But it turns out that they may be more like coworking spaces, where people move in and out and there are different jobs being performed at any given time.”

Ignoring these spatial and functional variations could result in an incorrect and incomplete understanding of the brain, Iraji added.

“Let’s say we measure functional connectivity between two regions at different times, and we see some variability,” he said. “One view is to say that the strength of connectivity associated with specific task changes over time. But what if that region is responsible for different tasks at different times? Maybe there are different people in these two offices on different days, so that’s why we’re seeing the difference in communication.”

The researchers’ findings build on the concept of the chronnectome — a model of the brain in which functional connectivity patterns change over time, which was initially proposed by Calhoun in 2014 — in this work elucidating the “spatial” chronnectome. 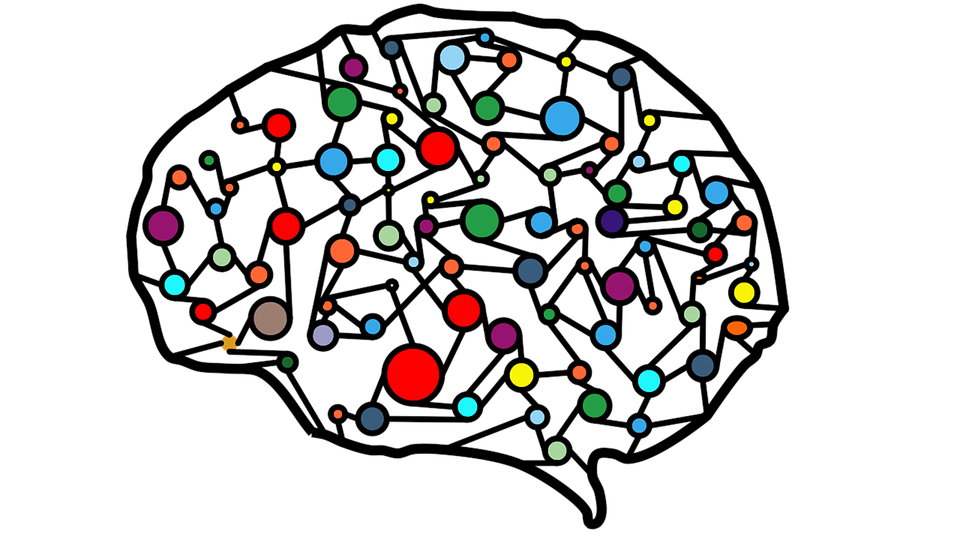 Rather, a given brain network’s spatial properties change over time as does its relationship with other brain networks, the researchers found. The image is in the public domain.

The scientists also looked at whether brain networks may differ between patients with schizophrenia and healthy control subjects. While they found contrasts between the two groups, they note that these differences are not present consistently and so it is important to capture these transient changes.

“Most previous studies have looked at average network activity over time,” said Iraji. “But when you look at the average, you remove all those tiny fluctuations that could be a differentiator between healthy individuals and those with brain disorders.”

Iraji said that in the future, scientists studying these disorders should include the possibility of spatial dynamic connectivity when attempting to model the brain.

The brain is highly dynamic, reorganizing its activity at different interacting spatial and temporal scales, including variation within and between brain networks. The chronnectome is a model of the brain in which nodal activity and connectivity patterns change in fundamental and recurring ways over time. Most literature assumes fixed spatial nodes/networks, ignoring the possibility that spatial nodes/networks may vary in time. Here, we introduce an approach to calculate a spatially fluid chronnectome (called the spatial chronnectome for clarity), which focuses on the variations of networks coupling at the voxel level, and identify a novel set of spatially dynamic features. Results reveal transient spatially fluid interactions between intra‐ and internetwork relationships in which brain networks transiently merge and separate, emphasizing dynamic segregation and integration. Brain networks also exhibit distinct spatial patterns with unique temporal characteristics, potentially explaining a broad spectrum of inconsistencies in previous studies that assumed static networks. Moreover, we show anticorrelative connections to brain networks are transient as opposed to constant across the entire scan. Preliminary assessments using a multi‐site dataset reveal the ability of the approach to obtain new information and nuanced alterations that remain undetected during static analysis. Patients with schizophrenia (SZ) display transient decreases in voxel‐wise network coupling within visual and auditory networks, and higher intradomain coupling variability. In summary, the spatial chronnectome represents a new direction of research enabling the study of functional networks which are transient at the voxel level, and the identification of mechanisms for within‐ and between‐subject spatial variability.