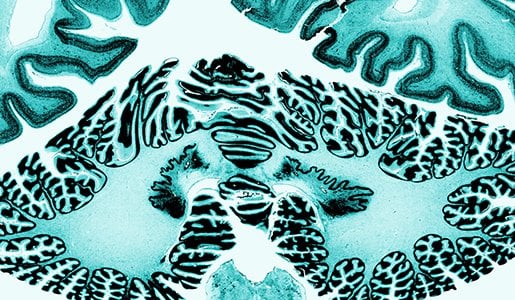 Before digitization, over 7,400 thin sections of preserved brain were stained to increase the visibility of cell bodies. Credited to Amunts et al. AAAS.
Home
Featured

A landmark three-dimensional digital reconstruction of a complete human brain, called the BigBrain, shows the brain anatomy in microscopic detail at a spatial resolution of 20 micrometers—smaller than the size of one fine strand of hair.

The reconstruction, published in the 21 June issue of the journal Science, exceeds the resolution of all existing reference brains presently in the public domain, and will be made freely available to the broader scientific community.

The fine-grained anatomical resolution of the BigBrain will allow scientists who use it to gain insights into the neurobiological basis of cognition, language, emotions and other processes, according to the study. The anatomical tool yielded by the researchers will serve as an atlas for neurosurgery and provide a framework for research in many directions, including enhanced understanding of brain diseases, such as Alzheimer’s disease.

“It is a common basis for scientific discussions because everybody can work with this brain model,” said Science co-author Karl Zilles, senior professor of the Jülich Aachen Research Alliance.

The new reference brain, which is part of the European Human Brain Project, “redefines traditional maps from the beginning of the 20th century,” explained lead author Katrin Amunts from the Research Centre Jülich. Amunts serves as director of the Cecile and Oskar Vogt Institute for Brain Research at the Heinrich Heine University Düsseldorf in Germany.

“The authors pushed the limits of current technology,” said Science Senior Editor Peter Stern. Existing reference brains do not probe further than the macroscopic, or visible, components of the brain. The BigBrain provides a resolution much finer than the typical 1 millimeter resolution from MRI studies. “The spatial resolution the researchers achieved exceeds that of presently available reference brains by a factor of 50,” said Stern.

“Of course, we would love to have spatial resolution going down to 1 micrometer,” said Amunts in a 19 June press teleconference. However, “there are simply no computers at this moment which would be capable to process such data, to visualize this or to analyze it.”

To create the detailed brain atlas, Amunts and colleagues took advantage of new advances in computing capacities and image analysis. Using a special tool called a microtome, they carefully cut the paraffin-covered brain of a 65-year-old female into 20 micrometer-thick sections.

The project was “a tour-de-force to assemble images of over 7400 individual histological sections, each with its own distortions, rips and tears, into a coherent 3-D volume,” said Science co-author Alan Evans, a professor at the Montreal Neurological Institute at McGill University in Montreal, Canada.

The sections were mounted on slides, stained to detect cell structures and finally digitized with a high-resolution flatbed scanner so researchers could reconstruct the high-resolution 3-D brain model. It took approximately 1000 hours to collect the data.

The researchers’ future plans for using the map include extracting measurements of cortical thickness to gain insights into aging and neurodegenerative disorders. Eventually, Amunts and colleagues hope to build a brain model at the resolution of 1 micron to capture details of single cell morphology. Detailed brain maps can aid researchers who are exploring the full set of neural connections and real-time brain activity, as scientists discussed recently in a Capitol Hill briefing sponsored by AAAS.

The creation of such a detailed brain map, offering a gateway to unprecedented insights into the brain’s anatomy and organization, was long in the works. “It was a dream for almost 20 years,” Amunts said. “The dream came true because of an interdisciplinary and intercontinental collaboration spanning from Europe to Canada and from neuroanatomy to supercomputing .”

Though not directly related to the BRAIN Initiative announced by President Barack Obama earlier this year, the work by Amunts and colleagues supports the Initiative’s goal of giving scientists the best possible tools with which to obtain a dynamic picture of the brain.

Notes about this brain mapping and neuroscience research