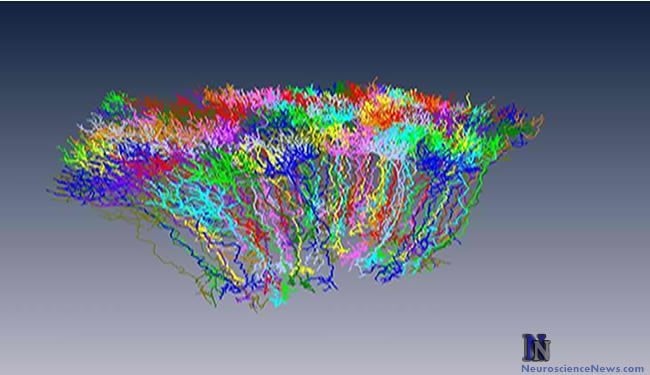 Brain’s Connectome From Branch to Branch

The human brain is the most complex of all organs, containing billions of neurons with their corresponding projections, all woven together in a highly complex, three-dimensional web. To date, mapping this vast network posed a practically insurmountable challenge to scientists. Now, however, a research team from the Heidelberg-based Max Planck Institute for Medical Research has developed a method for tackling the mammoth task. Using two new computer programs, KNOSSOS and RESCOP, a group of over 70 students mapped a network of more than 100 neurons – and they did so faster and more accurately than with previous methods.

With some 70 billion neurons and hundreds of thousands of kilometres of circuits, the human brain is so complex that, for many years, it seemed impossible to reconstruct the network in detail. Each neuron is linked to about a thousand others by means of finely branched projections called dendrites and axons, and communicates with them using electrical signals. The connections between the cells are critical for brain function, so neuroscientists are keen to understand the structure of these circuits – the connectome – and to reconstruct it in a three-dimensional map. Since no computer is powerful enough yet for the task, researchers are dependent on the human eye. However, the sheer number of cellular connections contained in even the tiniest fragment of tissue makes the undertaking seem pointless – unless it is shared among a large number of people.

Moritz Helmstaedter, Kevin L. Briggman and Winfried Denk, scientists at the Max Planck Institute for Medical Research in Heidelberg, have now successfully tested this procedure. They developed a special software tool called RESCOP which summarises the results of several annotators to yield an overall picture. In this way, and with the support of over 70 students from Heidelberg University, they reconstructed a network of over 100 neurons from the retina in full detail.

The students used the KNOSSOS software developed by the team in Heidelberg to trace the connections between the neurons. It is no coincidence that the program is named after Crete’s legendary palace, renowned for its elaborate labyrinth: “Tracing the connections in the brain is at least as hard as finding your way out of a mythological labyrinth”, explains Moritz Helmstaedter.

In order to reconstruct a neural circuit, researchers start by staining the neurons of a section of tissue with heavy metals to make them visible. Using three-dimensional electron microscope images, they start at the cell body and follow the dendrites and axons, marking the branch point nodes on the screen. Then they use the computer to generate a three-dimensional image of the section. In this way, they work their way through the tangle of neurons bit by bit. It is a tedious undertaking: One person working alone with the currently available programs would take at least 30 years to reconstruct a path of 30 centimetres in length. Besides, these procedures are prone to error, since the branch points are not always easily recognised and the annotator’s attentiveness decreases with time.

The KNOSSOS software considerably reduces the time required: It is about 50 times faster than other programs used up to now. In addition, the RESCOP program now makes it possible for dozens of people to work on the reconstruction at the same time. Since the method is easily learned, even non-experts can use it. Most of the students worked from home and sent their results to the scientists via e-mail. The scientists were able to establish that the error rate of the best students was no higher than that of experienced neurobiologists. Moreover, its sophisticated algorithms enable RESCOP to detect and average out inaccuracies. This means that the reconstruction is not only faster, but also more reliable than before.

“For the first time ever, these new programs could make it possible for us to unravel the complicated neural network of the brain – a task far more complex than decoding the human genome”, says Winfried Denk. Next, the scientists plan to reconstruct a fragment of the mouse cerebral cortex, as this is where all the important mental processes occur.