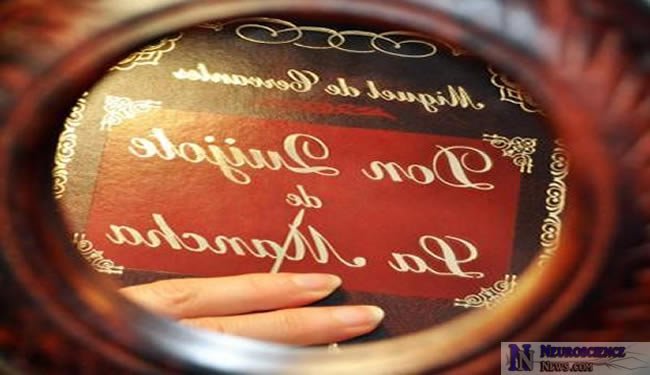 The Brain Against Words in the Mirror

Most people can read texts reflected in a mirror slowly and with some effort, but a team of scientists from the Basque Centre on Cognition, Brain and Language (BCBL) has shown for the first time that we can mentally turn these images around and understand them automatically and unconsciously, at least for a few instants.

“At a very early processing stage, between 150 and 250 milliseconds, the visual system completely rotates the words reflected in the mirror and recognises them”, Jon Andoni Duñabeitia, lead author of the study, tells SINC, “although the brain then immediately detects that this is not the correct order and ‘remembers’ that it should not process them in this way”.

In order to carry out this study, which has been published in the journal NeuroImage, the researchers used electrodes to monitor the brain activity of 27 participants while carrying out two experiments in front of a computer screen.

In the first, the participants were shown words with some of the letters and other information rotated for 50 milliseconds (an imperceptible flash, which is processed by the brain); while in the second case the entire word in the mirror was rotated (for example HTUOM instead of MOUTH).

The results of the encephalogram showed in both cases that, at between 150 and 250 milliseconds, the brain’s response upon seeing the words as reflected in the mirror was the same as when they are read normally.

“These results open a new avenue for studying the effects of involuntary rotation of letters and words in individuals with reading difficulties (dyslexia) and writing problems (dysgrafia)”, Duñabeitia explains.

The researcher gives reassurance to parents who worry when their children reverse their letters when they start to write: “This is the direct result of the mirror rotation property of the visual system”. In fact, it is common for children to start to write this way until they learn the “established” forms at school.

“Now we know that rotating letters is not a problem that is exclusive to some dyslexics, since everybody often does this in a natural and unconscious way, but what we need to understand is why people who can read normally can inhibit this, while others with difficulties in reading and writing cannot, confusing ‘b’ for ‘d’, for example”, explains Duñabeitia.

The scientific community has yet to discover how reading, a skill that is learnt relatively late in human development, can inhibit mental rotation in a mirror, a visual capacity that is common to many animals.

“A tiger is a tiger on the right side and the left side, but a word read in the mirror loses its meaning – although now we know that it is not as incomprehensible for our visual system as we thought, because it is capable of processing it as if it were correct”, the researcher concludes.

Why Do We Remember Stressful Experiences Better?