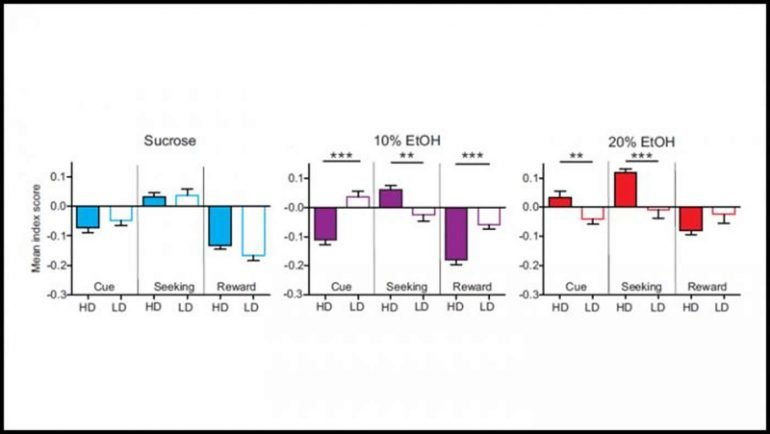 OFC activity was similar in high and low drinking rats during sucrose consumption (blue). But it was significantly different for the two groups during alcohol consumption (purple and red). Image is credited to Hernandez and Moorman, eNeuro 2020.

Summary: Study reveals the role the orbitofrontal cortex plays in individual differences to alcohol preference. The findings shed new light on how some are more prone to alcohol use disorder than others.

The brain’s response to alcohol varies based on individual preferences, according to new research in rats published in eNeuro.

Not everyone is prone to developing an alcohol use disorder. Some people can drink every day without acquiring a dependence, yet far less drinking may drive another person into addiction. This difference may be explained by how the brain interprets alcohol as a reward. The orbitofrontal cortex (OFC) stores reward value and regulates reward seeking, so OFC activity corresponds to individual preferences for drugs. Its malfunctioning may be involved in drug use disorders.

To see if the same pattern held true for alcohol, Hernandez and Moorman measured the OFC activity of rats while they alternated consuming sugar and alcohol. Neurons in the OFC behaved differently in each rat but correlated with how much alcohol the rat consumed when given free access — a marker of preference. The OFC in high-drinking rats responded to alcohol in a similar fashion to sugar, a universally rewarding substance to rats. But OFC responses to alcohol were suppressed in low-drinking rats, a sign that they did not find it as rewarding as sugar. If the brains of high-drinking rats find alcohol more rewarding than low-drinking rats, they may have a higher risk for developing a dependence.

Orbitofrontal cortex (OFC) plays a key role in representation and regulation of reward value, preference, and seeking. OFC function is disrupted in drug use and dependence, but its specific role in alcohol use disorders has not been thoroughly studied. In alcohol-dependent humans OFC activity is increased by alcohol cue presentation. Ethanol also alters OFC neuron excitability in vitro, and OFC manipulation influences ethanol seeking and drinking in rodents. To understand the relationship between OFC function and individual alcohol use, we recorded OFC neuron activity in rats during ethanol self-administration, characterizing the neural correlates of individual preference for alcohol. After 1 month of intermittent access to 20% ethanol, male Long-Evans rats were trained to self-administer 20% ethanol, 10% ethanol, and 15% sucrose. OFC neuronal activity was recorded and associated with task performance and ethanol preference. Rats segregated into high and low ethanol drinkers based on homecage consumption and operant seeking of 20% ethanol. Motivation for 10% ethanol and sucrose was equally high in both groups. OFC neuronal activity was robustly increased or decreased during sucrose and ethanol seeking and consumption, and strength of changes in OFC activity was directly associated with individual preference for 20% ethanol. Ethanol-associated OFC activity was more similar to sucrose-associated activity in high vs. low ethanol drinkers. The results show that OFC neurons are activated during alcohol seeking based on individual preference, supporting this brain region as a potential substrate for alcohol motivation that may be dysregulated in alcohol misuse.

Understanding how alcohol preference manifests in the brain is important for understanding use and misuse. We trained rats to self-administer alcohol and sucrose, as a positive preference control. During self-administration we recorded the activity of neurons in the orbitofrontal cortex (OFC), an area previously associated with reward motivation and drug use. OFC neuronal activity was aligned with behavioral alcohol preference, both at a population level and on an individual basis. OFC activity of high alcohol-preferring rats during alcohol seeking and consumption was similar to that seen during sucrose-associated behaviors. These data provide evidence that the OFC is a key region underlying individual alcohol preference and suggests further scrutiny of OFC in the context of alcohol use disorder.